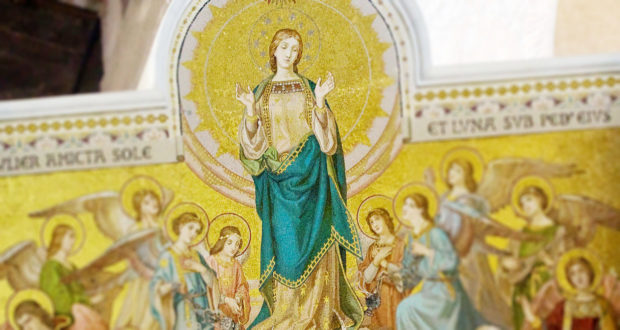 Full of Grace: Mary’s Immaculate Conception and the Bible

2 minutes
Are there explicit, “direct” proofs of the Immaculate Conception of the Blessed Virgin Mary in the Bible? No. Does the Bible ever teach that all doctrines must be explicitly contained in it? No. Is this doctrine harmonious with what is in Scripture, and supported by analogy and plausibility? Yes.

Many translations use “favor” here, yet even the great Baptist Greek scholar A.T. Robertson (Word Pictures in the New Testament, Vol. II, 13) agrees that the word involved (kecharitomene) means “full of grace which thou hast received”.

Now, a Catholic asks, “what does it mean to be full of grace?” For St. Paul, grace is the antithesis and overcomer of sin:

Romans 6:14, 19, 22 For sin will have no dominion over you, since you are not under law but under grace… [19] … so now yield your members to righteousness for sanctification… [22] But now that you have been set free from sin … the return you get is sanctification and its end, eternal life.

Moreover, we are saved by grace:

Therefore, it follows, I submit, that for a person to be full of grace is to both be saved and to be exceptionally, completely holy. Therefore, Mary is holy and sinless. The essence of the Immaculate Conception is sinlessness, and this is deduced from many biblical passages about the antithetical relation of grace to sin, and salvation and its accompanying sanctification to sin.

The only remaining question is: when did God apply this grace to Mary? We know she possessed it as a young woman, at the Annunciation. Catholics believe that God gave her the grace at her conception so as to avoid the original sin that she inevitably would have inherited, being human, but for God’s preventive grace, which saved her from falling into the pit of sin.

But do we ever observe in the Bible, persons being extraordinarily sanctified, even before their birth, as we believe Mary was? Yes we do; for example, the prophets Isaiah and Jeremiah:

Jeremiah 1:5 Before I formed you in the womb I knew you, and before you were born I consecrated you; I appointed you a prophet to the nations. (cf. Sirach 49:7)

“Consecrated” or “sanctified” (KJV) in Jeremiah 1:5 is the Hebrew word quadash (Strong’s word #6942). According to Gesenius’ Hebrew-Chaldee Lexicon of the Old Testament (p. 725), in this instance it meant “to declare any one holy.”

Sanctified From the Womb

Jeremiah was thus consecrated or sanctified from the womb; possibly from conception. This is fairly analogous to the doctrine of the Immaculate Conception. We know Jeremiah was a very holy man. Was he sinless, though? Perhaps he was. We also have New Testament evidence of such sanctification before birth (John the Baptist and St. Paul):

Luke 1:15 for he will be great before the Lord, and he shall drink no wine nor strong drink, and he will be filled with the Holy Spirit, even from his mother’s womb. (cf. 1:41, 44)

Galatians 1:15 . . . he who had set me apart before I was born, and had called me through his grace,

We know that John the Baptist was also a very holy man. Was he sinless? We can’t know that for sure from the biblical data. St. Catherine of Siena, for one, believed that he never sinned (A Treatise of Prayer). But we do know for sure that he was sanctified from the womb.

Therefore, by analogy and plausibility, we can and may conclude that it is “biblical” to believe in faith that Mary was immaculately conceived. Nothing in the Bible contradicts this belief. It does require faith, of course.

God restored to Mary the innocence of Eve before the Fall, and filled her with grace, in order to prepare her for her unspeakably sublime, sanctified task as the Mother of God the Son.

Why should He not do so?