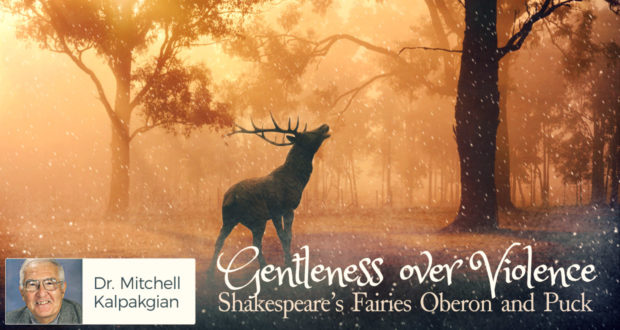 Oberon, king of the fairies, and Puck, the “merry wanderer of the night” in A Midsummer Night’s Dream, are lighthearted, fun-loving, playful spirits with the spontaneity and ebullience of children in their zest for life.

As in folklore, Oberon and Puck bring mirth into daily life and keep everyone young at heart and in touch with the joy of childhood.

True to tradition, Shakespeare’s fairies frolic only in the night, disappear at the break of dawn, and beautify the world with the jewelry of dewdrops on flowers. They do not just come and go but leave something behind, some jewel, gift, or favor that rejuvenates a jaded world and breathes life into a weary soul.

They not only revel in the night with dances and laughter but also deposit “fairy favors” in the darkness as they do good by stealth. (Recall the Grimm folktale about the poor shoemaker blessed by the favors of the fairies that make his shoes while he sleeps at night).

The gems that fairies leave as dewdrops in flowers hint of mysterious good deeds done anonymously.

Shakespeare’s mirthful characters perform magic at night by the power of gentle healing or by quiet acts of goodness. When human beings end the day and go to sleep, they often leave work unfinished, arguments unresolved, and chaos in need of order. The fairies, always with the lightest touch and in hidden ways, bring a special medicine or grace into the world at night that works wonders in the most imperceptible way.

Through the magic of sleep, play, and courtesy Oberon and Puck cure folly, heal broken relationships, and restore sanity to a senseless world seeking complicated or violent solutions to problems needing only a simple sense of humor, the honest voice of reason, or a kind touch.

In the darkness of the night King Oberon overhears a young couple, formerly in love, now bitterly arguing. Helena grieves as Demetrius, once declaring his love and courting with the intention of marriage, has abandoned her and turned his attention to Helena’s dearest friend Hermia who plans to marry Lysander and has no romantic interest in Demetrius.

Oberon, explaining to Puck that “A sweet Athenian lady is in love/ With a disdainful youth,” commands the fairy to anoint the eyes of Demetrius with the juice of a wild pansy, a healing herb to cure his blindness and nonsense. The magical effect of the medicinal potion “Will make or man or woman madly dote/ Upon the next live creature that it sees.”

Like children, fairies always think as they play and play as they think. Oberon is full of fresh ideas that never appear in a court of law or a setting of official business.

Oberon applies to the quarreling lovers a simple, painless healing medicine as natural as sleep, flowers, or play. Demetrius is sound asleep and feels nothing as Puck anoints his eyelids with the love juice. This is the kindest, gentlest touch—not the cruel rejection and harsh words of the hardhearted Demetrius who can only speak with threats or insults: “For I am sick when I do look upon you” and “I’ll run from thee and hide me in the brakes” [bushes].

Demetrius’s folly of courting an engaged woman who does not return his love needs correction. Oberon cures his blindness when, by virtue of the magical flower, his gracious courtesy, and the kind intervention of fairies, he brings heavenly concord out of fierce strife.

Another bitter argument in the play erupts that requires the magic of the fairies—the conflict between Hermia and her father Egeus. Rejecting the courtship of Demetrius because she loves Lysander, Hermia refuses to marry the suitor her father has chosen —a defiance that threatens her with death. Egeus appeals to the letter of the law of Athens that punishes disobedient daughters.

As the Duke of Athens warns, if Hermia does not accept Egeus’ choice of husband for her, Hermia will either suffer the death penalty or spend a lifetime in a convent against her will: “To you your father should be as a god.”

Neither the authority of the father, the law of the land, or the decree of the Duke of Athens solves this crisis, engendering only bitter rancor and angry tempers. Finding no resolution in Athens, Hermia and Lysander elope to marry and travel through the forest.

There they too experience the gentle healing of the fairies that use mildness rather than violence, courtesy rather than anger, and playfulness rather than gravity to bring peace between father and daughter and harmony among the lovers. The fairies know the secret of how to bring order out of chaos, one known to saints of gentleness like St. Francis de Sales: one catches more flies with a drop of honey than a gallon of vinegar.

When the lovers fall asleep, Puck at first mistakenly puts the love juice on Lysander’s eyes rather on Demetrius’ lids (both are wearing the same Athenian garments). Seeing Helena, Lysander now claims he loves her and feels no attraction for Hermia. All disorder prevails when, to correct his error, Puck then places the potion on Demetrius’s eyelids.

When Demetrius awakens and beholds Helena, he too professes undying for the woman of his heart (“O Helen, goddess, nymph, perfect, divine”)—a situation that convinces Helen she is the victim of a cruel joke: “O, spite! Oh, Hell! I see you all are bent/ To set me against your merriment.”

When Hermia, who was courted by both Lysander and Demetrius, finds herself spurned by both lovers under the spell of the love potion, she too acts incredulous: “Am I not Hermia? Are you not Lysander?”

All these strange, irrational changes that violate right reason and just order need rearrangement. When Puck corrects his mistake and every Jack has his Jill, all discord dissipates. The lighthearted play of the fairies is the magical cure, not the deadly seriousness of the law of Athens. The mysterious darkness of sleep, not the daylight hours of business, is the time the fairies give their gifts in the night.

The gentleness of the small drops of the potion from a delicate flower creates greater healing than the great might and intimidation of angry men wielding the power of the law. Oberon’s touch is light, not heavy-handed like dictatorial threats of the father and the duke.

Oberon’s touch is kind and gentle, painless and harmless, not stern like a death sentence or lifetime imprisonment.

Oberon’s touch is natural, using the flower as a healing ointment, not an extreme measure such as forcing a maiden to marry a man she does not love. Oberon’s touch is silent and invisible, performing fairy favors in the night and leaving no trace as he moves in graceful fairy dances (“Every elf and fairy sprite/ Hop as light as bird from brier”).

Oberon’s touch is comical and joking rather than grim and grave as he uses the childlike, mischievous Puck with his comic antics as the agent of curing folly and reconciling the lovers. Oberon’s touch is balm, not bitter medicine, and Puck’s laughter is innocent, as harmless as children having fun.

Oberon’s touch brightens and beautifies with fairy rings, dewdrops, and gifts in the night, blessing all the places it visits with a peace and joy that the Duke of Athens finds astonishing: “How comes this gentle concord in the world?”