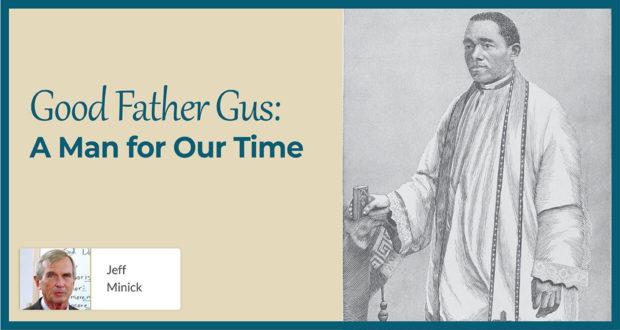 Good Father Gus: A Man for Our Time

Born a slave, Father Tolton is a grand example of how faith, perseverance, and discipleship can be welded together to overcome seemingly impossible odds.

The year 1886 marked the first time in the history of the United States an African American was ordained a priest.

Baptized Augustine Tolton, John Augustus Tolton (1854-1897) was born a slave in Missouri. Though accounts vary on how he won his freedom—he and his family either escaped or were set free at the beginning of the Civil War—once they had gained their liberty, several of the family members worked in a tobacco factory in Quincy, Illinois making cigars.

There an Irish immigrant priest, Peter McGirr, took an interest in young Augustus, and despite some protests by white parents, enrolled him in Saint Peter’s parochial school during the winter months when the tobacco factory was closed. Later, Tolton studied various subjects under the guidance of several priests.

Determined to become a priest himself, but refused admission to the American seminaries to which he had applied, Tolton entered Rome’s Pontifical Urbaniana University on the recommendation of Father McGirr. He was ordained to the priesthood at the age of 31 and returned to the United States to minister to the black community.”

Back in Quincy, he encountered opposition to his efforts to open a parish and a school, not only from whites but also from some African American Protestant ministers who feared he might steal away their members. Eventually, Father Tolton landed in Chicago, where various benefactors, including Katharine Drexel, who was canonized in 2000, helped the young priest found and build St. Monica’s Catholic Church.

As St. Monica’s attracted more and more parishioners, Father Tolton’s reputation grew among the laity and the American Catholic hierarchy.

An 1893 article in the “Lewiston Sun” said of the priest, “Father Tolton…is a fluent and graceful talker, and has a singing voice of exceptional sweetness, which shows to good advantage in the chants of high mass. It is no unusual thing for many white people to be seen among his congregation.”

Father Tolton suffered from an undiagnosed disease and died at the age of 43, his condition perhaps exacerbated by the fierce heatwave that struck Chicago that summer. In 2010, Chicago’s archbishop, Francis Cardinal George, advanced the cause for Father Tolton’s canonization, and in 2019 Pope Francis declared him “venerable,” the first step toward sainthood.

So what lessons can we take from the life of this remarkable man, especially given the times in which we now live?

First on the list is perseverance. Here was a man who encountered extensive racial prejudice and who had to battle his way into the priesthood, yet who never lost sight of the goal he had set for himself and who kept his faith in the bargain. Like another great African American of that time, Booker T. Washington, Father Tolton worked until his death to bring whites and blacks into harmony and to improve the lives of those who were former slaves or the children of slaves.

We also should note the lack of bitterness in Father Tolton. Surely most of us would have felt resentment had we lived in those times of legal segregation and prejudice, but from what we know of Father Tolton, or “Good Father Gus” as some called him, he kept his eyes on God, loved the Catholic faith, and never gave way to anger about the obstacles he would need to overcome. Led by his example of love, other young African Americans soon were entering the priesthood.

Finally, in so many ways, Augustus Tolton embodies the American Dream, the idea that in this country, people have the freedom to make of themselves what they wish, to follow and to fulfill a vision. Were he alive today, I suspect Father Tolton would give all credit for his success to Jesus Christ, and rightly so.

But as all true followers of Christ know, we work in tandem with the Lord, bringing our talents to the table, and using those talents for the good, the true, and the beautiful. In Father Tolton, we have a grand example of faith and discipleship welded together to overcome seemingly impossible odds.

At the moment I am writing these words, all too many Americans are divided, one from the other, gripped by an ugly hatred for those with whom they disagree about politics and culture. We as Catholics must conduct ourselves otherwise.

“Keep the Faith” is our age-old battle cry, and keeping that Faith in today’s embittered clashes means using all the tools of reason, prayer, and belief in Christ and His Church.

We have as our examples all those holy men and women who have gone before us, those saints who kept their eyes on the prize—the heavenly kingdom—who fought their earthly battles with honor, dignity, and truth, and who inspire in us the courage to do what is right and, as Saint Paul said, to “finish the race.”

Father John Augustus Tolton is one of these figures deserving our deep respect and worthy of our emulation.