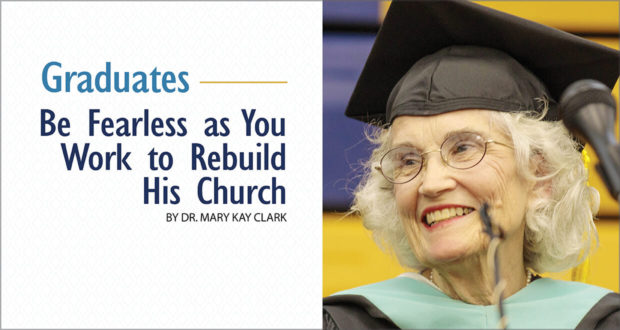 Graduates, Be Fearless as You Work to Rebuild His Church

In her 2019 message to Seton Home Study School graduates, Dr. Mary Kay Clark called on them to help rebuild the Mystical Body of Christ in a difficult time.

Seton graduation day has become one of my favorite days. I see families gather together as a witness to the power of love and the power of God’s grace and generosity.

So thank you for being here today.

The Stories of Heroes

You graduates have done something wonderful. You may not have realized it at the time when you turned in your quarterly work, but you inspired us at Seton. We all are very proud of you!

He is a French priest. And his name is Father John Fournier.

On Monday night of Holy Week, just last month, Father Fournier was on his way to dinner in Paris. But his plans quickly changed.

Father suddenly saw that fire had erupted in the Notre Dame Cathedral!

Without any concern for his safety, he quickly made his way over to the Cathedral and raced into the burning church. His mission was simple: to save the Blessed Sacrament.

As Father went inside with a team of courageous firefighters, he saw a terrible sight: enormous and flaming wooden beams that had fallen from above, causing hot blazing embers on the floor.

It was literally raining fire from above, as flaming sections of the roof began their descent through the air and crashed with flying sparks when they hit the floor. Drops of searing-hot lead were falling from the ceiling, as the intense heat turned solid into liquid.

Moving as quickly as possible, Father made his way carefully through the hot and dangerous fire to the altar stairs, where he stepped up to the altar and opened the tabernacle and rescued the Sacred Hosts.

Father said later that two things went through his mind in those precious moments. First, he felt deep sorrow for the damage the fire was causing to the beautiful historic Notre Dame Cathedral and its historic altar. But he said that he also experienced “an indescribable joy linked to the hope of the Resurrection.”

Even though he knew that he was risking his life, Father Fournier reported later that he was not fearful.

He knew he was accompanied by Jesus Himself. He continually prayed to Jesus to preserve this ancient cathedral dedicated to His heavenly mother.

Father lovingly protected the Blessed Sacrament inside his jacket, and then picked up the Cathedral’s unique relic, the Crown of Thorns. Carefully carrying the Crown of Thorns and the Body of Christ, Father cautiously stepped his way among the burning timbers on the floor of the cathedral, making his way to safety…untouched by fire.

In the history of Christendom, Father Fournier could make a rather unique claim: he saved the Blessed Sacrament and the Crown of Thorns.

There are many lessons we homeschooling families can learn from Father Fournier.

The lesson of Faith here is clear and inspiring.

There are those in the Church today who seem afraid to profess their Faith. But Father Fournier’s Faith is a powerful witness to the world. No man would have run into a burning building with flaming roof shingles flying down in the air …unless he had a powerful faith in God. Father’s courage and faith should make us realize that Jesus waits for us to visit Him in every Catholic Church.

That fact should inspire us to attend Mass as often as possible.

The second lesson here is a lesson of Hope.

But Father Fournier has studied history. And commenting on the events of the fire, Father looked back in church history and made this observation:

“In the history of Western Christendom, buildings were burned, collapsed, and were attacked. Then what happened? Everyone [meaning Catholics] rolled up their sleeves and rebuilt.”

Do not Fear, Graduates!

Do not fear, Graduates! Church History is a lesson of hope. Church history is the story of people like you, rebuilding the Church when the Church “seems” to be destroyed by some kind of fire.

Father Fournier’s third lesson is one of love.

Father’s decision to face the falling timbers of fire in the great Notre Dame cathedral was a re-affirmation of love between Jesus and those who love Him. At the Cathedral that evening, Father Fournier was physically carrying the Eucharist. In a much deeper sense, however, the Eucharist was carrying him.

Graduates, whatever fiery challenges you face in your life, they can all be overcome by the reception of Jesus in Holy Communion.

Jesus, the Son of God, has given Himself to the world, but don’t forget…. He has given himself to you.

Graduates, continue living a life in which the Blessed Sacrament is the center of your life.

Keep the Catholic Faith… often saved for us by others.

No matter what fires seem to be burning around you, don’t hesitate to run to the altar and receive Jesus Christ into your heart and soul. Keep your heart on fire to carry on the work of Jesus by living the Catholic life as all we Catholics are called to do.

Parents, God bless you… for the work you have done in raising your children to be practicing Catholics!

With great joy and appreciation, we at Seton thank you for letting us be part of your lives. And on behalf of everyone at Seton Home Study School, God bless you and your family.