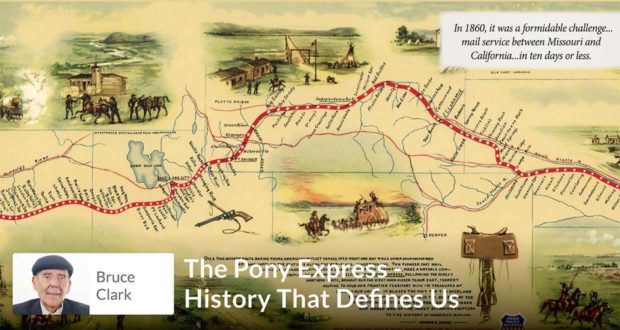 The Pony Express – History that Defines Us

The nineteen months of the Pony Express symbolize the ingenuity, courage, and determination common to Americans during a magical era of the United States.

In the modern push-button world in which we live, we can ask a computer almost any question, and receive a nearly instantaneous response.

Today, we are able to send and to receive e-mail messages from around the world in seconds. We tend to forget that only a century and a half ago, the fastest and most reliable method of communication was riders on horseback.

Jumping in the Saddle

On April 3, 1860, in St. Joseph, Missouri, a young fellow named Johnny Frey leaped astride his horse and galloped off on the first leg of an arduous journey of 1,966 miles. Johnny was the first Pony Express rider to ride westward.

A little later that day, in Sacramento, California, a young man named Billy Hamilton jumped into the saddle, and became the first eastbound Pony Express rider.

The Pony Express was the brainchild of William Russell, a partner in the firm of Russell, Majors, and Weddell. Russell hoped to provide a mail delivery service between St. Joseph and Sacramento in ten days or less. Each ounce of mail cost $10.00 to send.

There were about 160 “stations” along the route where horses were kept by station keepers. Each horse carried the mailman and his mail between 10 to 15 miles. The time and distance depended on the difficulty of the terrain. The riders averaged about 75 miles as their part of the route, so they needed to switch horses about five times during their trip.

A Rifle and a Pair of Pistols

The mail was carried in a mochila, a leather blanket that fit over the saddle. The mochila had four pouches. One of the four was for “local” mail. Station keepers had a key for that pouch. The other three pouches were opened at the end of the route.

Each rider had a “home station” where he stayed between rides. The riders were supplied with a rifle and a pair of pistols, which testify to the dangers the riders could expect along the way.

One of the famous rides was when several riders carried a copy of Lincoln’s Inauguration Address across the wind-blistered plains, across rushing rivers, through snow-clogged mountain passes, and yet reached California in less than ten days.

The last ride was made on October 26, 1861. A telegraph line which connected East and West American cities was finally completed. The memorable rides of the Pony Express suddenly were over. Nevertheless, the nineteen months of the Pony Express symbolize the ingenuity, courage, and determination common to Americans during that growing era of the United States.

Pony Express riders were heroes to be sure; but so were Russell, Majors, and Weddell. They lost over a million dollars in their heroic monetary venture to do what was a huge service and consolation for communication for American families.

Those adventurous days of sturdy young men, many of whom were only teenagers, thundering across the plains, braving countless dangers, have been immortalized in hundreds of novels and short stories which whisk us back to the magical moments of yesteryear.

Amazingly, despite a dozen forms of danger, the Pony Express riders never lost a letter.