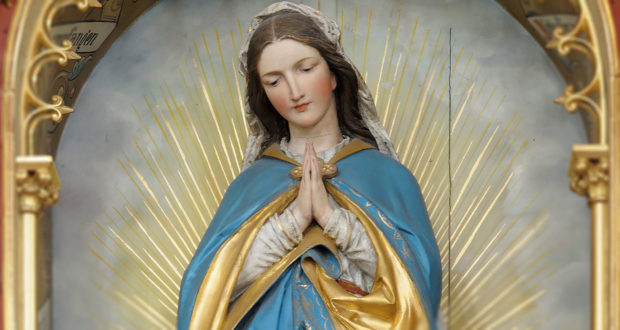 A priest who was helping a Baptist woman to understand the perpetual virginity of Mary became a bit frustrated, finally blurting out: “God Himself was in Mary’s womb!”

In a moment of illumination or grace or inspiration, the woman understood, thinking: “Take off your shoes, for this is holy ground.” The many relevant biblical analogies took hold.

We observe in Holy Scripture, for instance, Uzziah, who died when he touched the ark of the covenant, which was arguably the holiest object in the Old Testament, even though he was only trying to prevent it from falling (2 Sam 6:2-7).

Others died by merely looking inside the ark (1 Sam 6:19; cf. Ex 33:20). When God was present in a special way on Mt. Sinai, at the time Moses received the Ten Commandments (Exodus, chapters 19 and 20), the people were warned not to even touch the mountain or its border, lest they die (Ex 19:12-13). This included even animals.

I submit that this has implications for the propriety (though not literal necessity) of Mary being immaculate, in order to carry God in her womb for nine months. Without going into unnecessary detail, it also follows analogically, and from pious reflection, I think, that Mary’s perpetual virginity is fitting and proper by the nature of the relationship of a holy God and man.

The Blessed Virgin Mary became, in effect, the New Holy of Holies, where God specially resides. But in the case of Mary, God is more present than He ever was in the tabernacle and temple, because now He is there physically, as a man, as well. Mary is the ark of the new covenant (as the Church fathers called her) and Mother of God (the Son).

Similarly, Jesus taught us that there is no marriage in heaven (Mt 22:30; Mk 12:25; Lk 20:34-35). Marriage is a type of the relationship of God and man, and our eventual union (Eph 5:21-33). The closeness that we will have with each other and with God in heaven is far more profound than mere physical proximity.

The denial of Mary’s perpetual virginity (which was a radical innovation of the last 200-250 years, and not the view of the Protestant founders) exhibits an inadequate understanding of holy places. Consecrated persons and places are “set aside” for God’s holy purposes. Mary was perpetually a virgin not because normative married life is “bad” (a common unjust accusation against it) but rather, because consecrated virginity is a higher calling, and being the Mother of God is higher still.

Someone recently stated in a Facebook discussion that Catholic beliefs about Mary would mean she wasn’t a “normal wife.” I replied that Mary was anything but a “normal” Jewish wife in the first place. She was suddenly “with child” miraculously by the Holy Spirit, and gave birth to Jesus: God the Son.

Most Protestants still accept the virgin birth. Consecrated virginity is far less notable than those two events. Yet the incarnation and virgin birth are widely accepted, while perpetual virginity is widely rejected. The traditional unity of the three related things is no longer comprehended by many.

Too many people assume that consecrated virginity is unimaginable or impossible, and that one could not possibly desire it. I think this prior assumption lies at the root of much of the objection. St. Paul (1 Corinthians 7) maintains that the single state allows a higher, undistracted devotion to the Lord. Why should we think, then, that the Mother of God would be any other than a perpetual virgin, devoted to God the Father, and her Son, God the Son?

The Blessed Virgin Mary was consecrated by God, with her consent. Some people are called to be “married to the Lord.” It’s precisely because we are so tied to the earth that we so often can’t grasp heavenly realities that are clearly stated in Scripture (by both Jesus and Paul, in talking about singleness and voluntary eunuchs).

Some things can be so entirely appropriate that they almost approach necessity: not strictly “logically” but perhaps “spiritually.” Even the crucifixion (and perhaps the incarnation itself) were not strictly necessary (God could have simply declared those people saved who would have been saved by Jesus’ death on the cross), but they are sublimely important in the overall scheme of things. God chose to save mankind by means of them. The virgin birth and perpetual virginity were the means that God chose to create the appropriate context in which the incarnation occurred.

In Catholic thinking, and the ancient apostolic tradition, Mary’s perpetual virginity is a protection, so to speak, of the miraculous nature of the incarnation and Jesus’ birth. It’s a Christocentric doctrine: just as all Marian doctrines are.

But so many critics are almost obsessed with unfairly blasting the Catholic Church for supposedly raising Mary to an idolatrous state, that they miss the fundamental reason for Marian beliefs: to exalt and focus upon our Lord Jesus Christ.