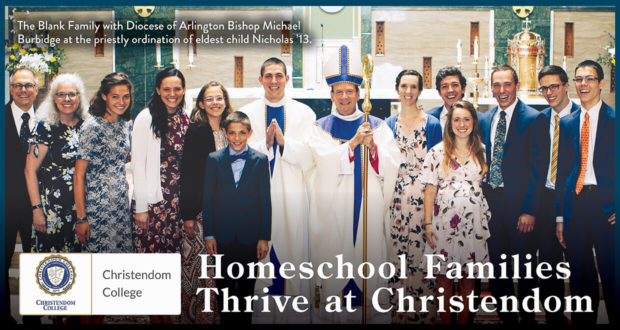 Christendom has become the natural destination for homeschool families—with more than 60% of the student body coming from home education.

Richard and Monica Blank wanted something different, something better, for their children than what they experienced in their college years. They had chosen to homeschool their nine children with Seton Home Study to ensure they received a solid Catholic foundation.

With an alarming 80% of Catholics leaving the Faith before turning 23 years old, the Blanks wanted to make sure that the college their children attended would meet their family’s top goal of helping them continue to learn the Truth and live the Catholic Faith. 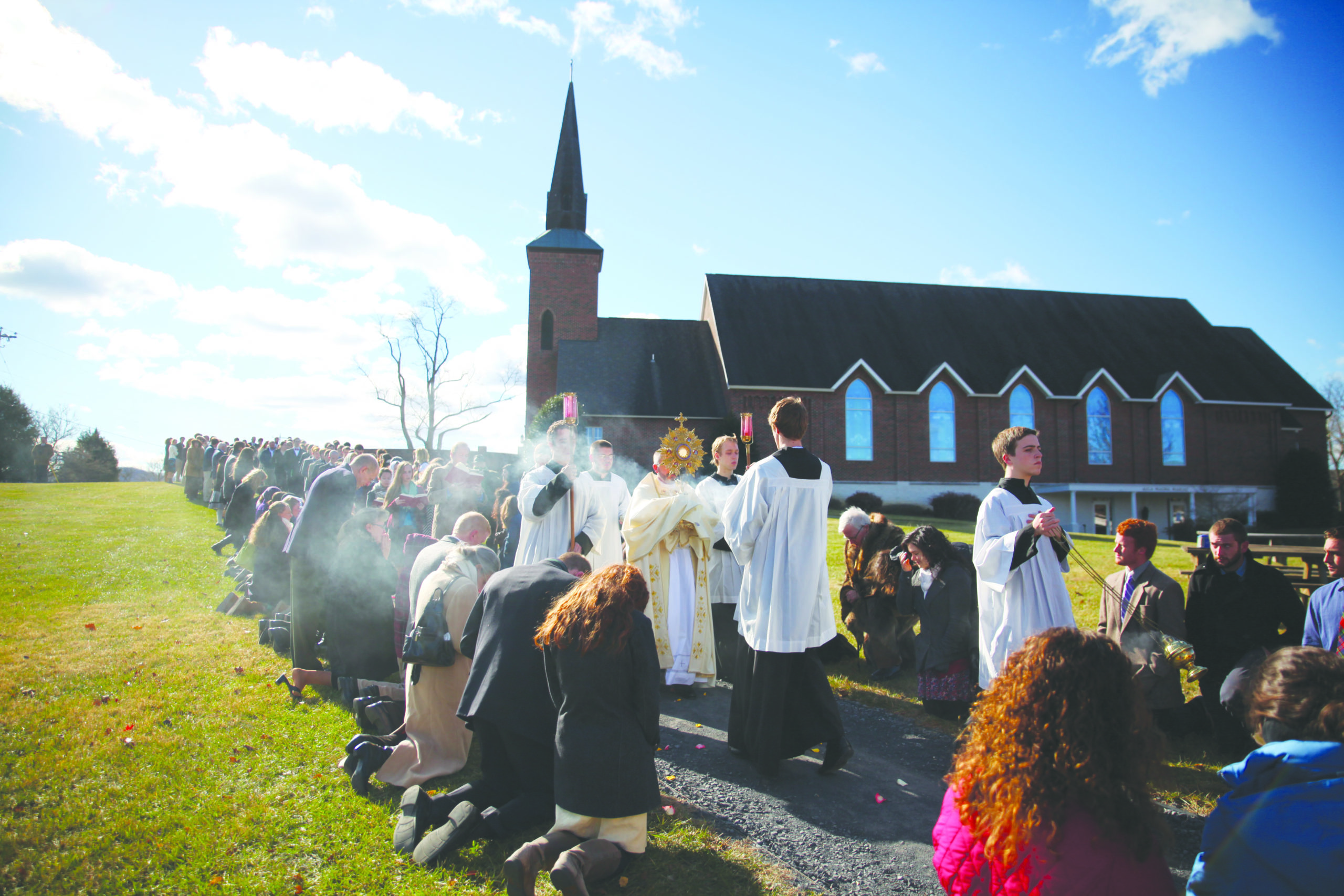 “We told our eldest child, Nicholas (and all of our children since), that college should be a place to make good, long-term friendships and grow in your Catholic faith,” said Richard. “We wanted his college experience to be a solid step out into the world in a truly Catholic environment. Christendom clearly exceeded all those requirements.”

Christendom College was founded in 1977 in response to the cultural crisis that was taking place in which God was rejected, and truth and morality were called into question and actively opposed.

Christendom’s unique mission of forming lay apostles who will transform the culture and “restore all things in Christ,” is what draws most students and their families to the campus and keeps them sending child after child after child to the college.

The college provides an authentically and fully immersive 24/7 Catholic culture in which students learn the Truth, live the Faith, and thrive as Catholics.

Although the crisis in our culture and in higher education has only accelerated, Christendom’s time-tested Catholic liberal arts education is now even more relevant and essential for students interested in growing their Faith in college.

It’s not surprising, therefore, that Christendom has become the natural destination for homeschool families—with more than 60% of the student body coming from home education.

In addition to an unmatched Catholic identity, students receive personalized services, including academic support and hands-on career development assistance to help them succeed academically, spiritually, personally, and professionally and pursue the greatness to which God has called them.

In fact, over the last two years, an average of 98% of each graduating class has been employed or in grad school within six months – an amazing feat and statistic in this day and age!

Fast forward to 2022, and five of the nine Blank children have graduated from Christendom, with one more set to graduate next year—making Richard and Monica overjoyed with the results of their children’s education. 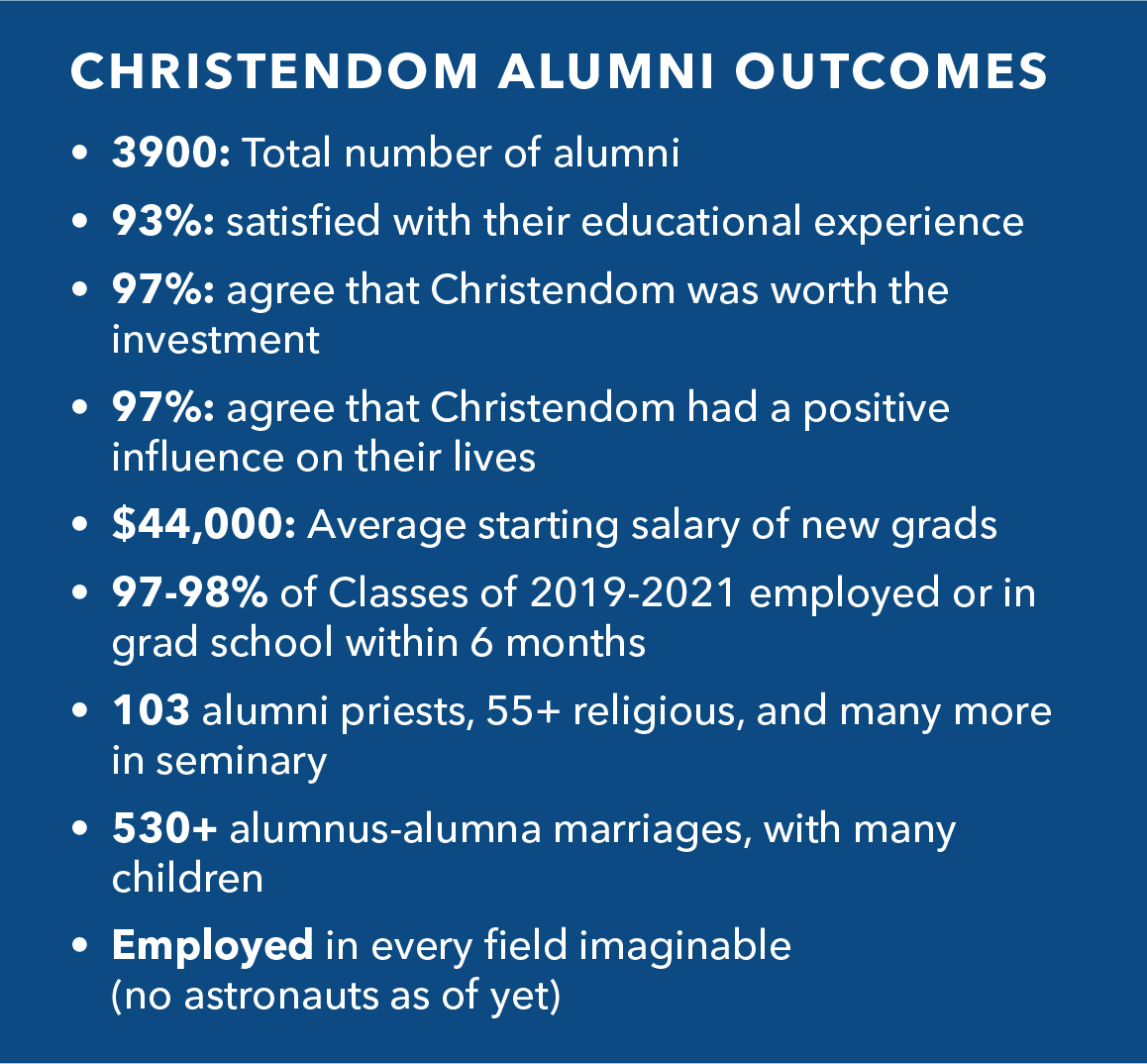 “All have come out of Christendom more firmly rooted in their faith, with great friends, experiences, and confidence to succeed in life,” Richard said. “Christendom provided a true, wholesome college experience where they were able to live and flourish. It allowed our children to play college athletics, participate in theatrical productions, gain valuable leadership experience, develop deep friendships, and actively practice their faith, all while obtaining an excellent education. Their interaction with professors, both in and out of the classroom, also helped to form them into critical thinkers that are passionate and faith-based, able to excel at whatever they put their minds toward.”

So what are the Blank children up to these days? Richard and Monica will happily tell you that Fr. Nicholas ’13 is a Catholic priest serving at St. John the Evangelist in Warrenton, VA (one of 22 Christendom alumni priests serving in the Diocese of Arlington). Klarissa ’14 is the director of religious education and youth ministry at St. Rita’s Catholic Church in Alexandria, VA, and the religion teacher for 7th and 8th grade in their school.

Peter ’16 is a commercial property manager in Manassas, VA, and is married to Bridget (née McMahon) ’16, an accounts payable manager. Richard ’18 is a firefighter/EMT in Prince William County, VA, and is married to Danielle (née Corcoran) ’18 – a full-time mother who cares for their two daughters, Zelie and Frances. 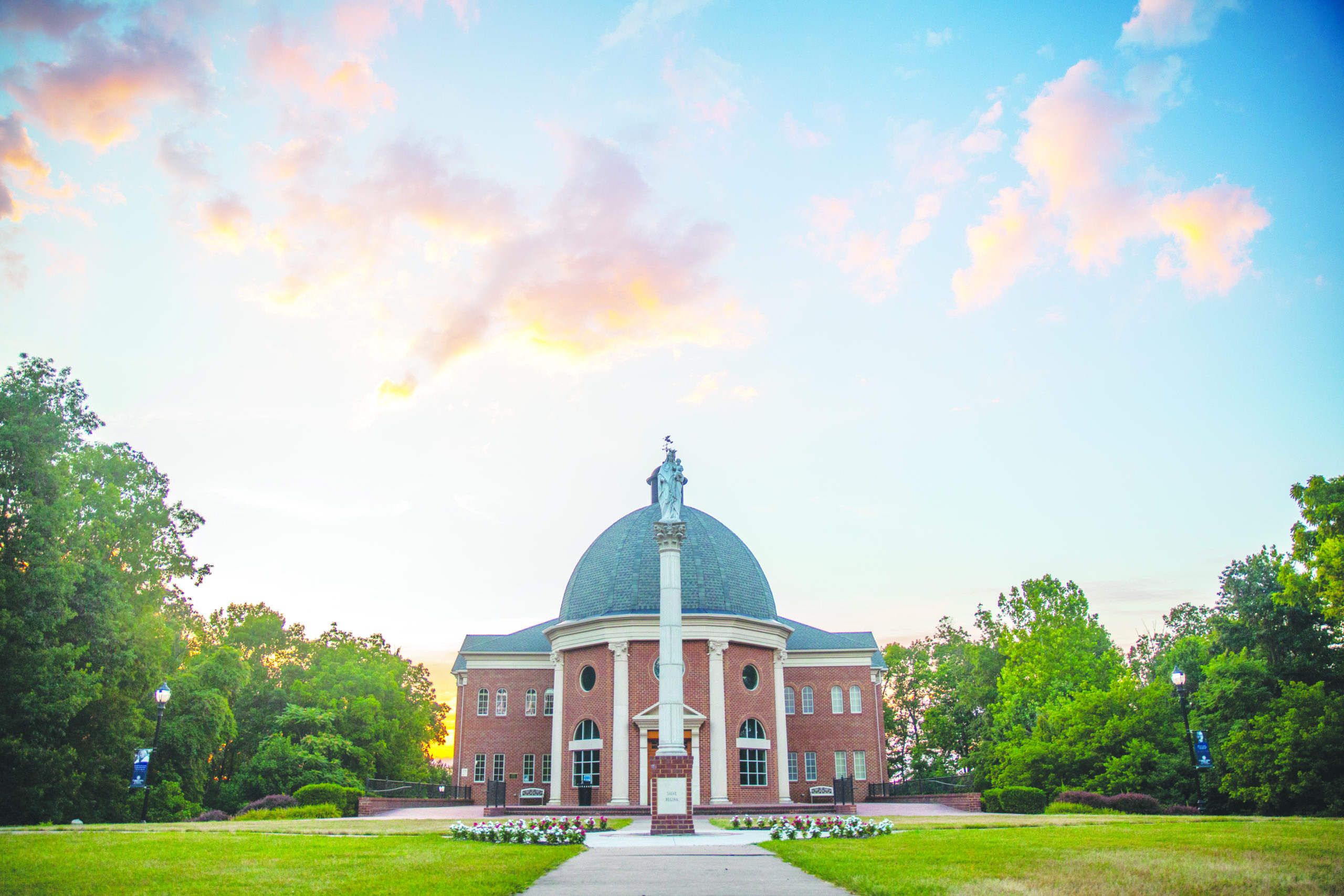 Martha ’21 works as a farmhand at a working bed and breakfast, gaining life experience in Lancaster, PA, and is engaged to classmate Sam Bratt ’21 with a wedding planned for this summer. Michael ’23 is a junior and had the lead role in the musical The Music Man on campus this past spring.

The Blanks were involved in many campus activities while students. They played on the soccer, baseball, basketball, and rugby teams, participated in theatrical productions, and held numerous leadership positions, including summer program counselors, resident assistants, pro-life ministry, and so much more.

The Blank Family is just one example of many homeschool families who have chosen Christendom to continue the important work begun at home.

They have witnessed the joyous results as their children grow into faithful and articulate Roman Catholics who are well-rounded and successful in their vocations and career and are involved in the larger mission of rebuilding a Christian society.