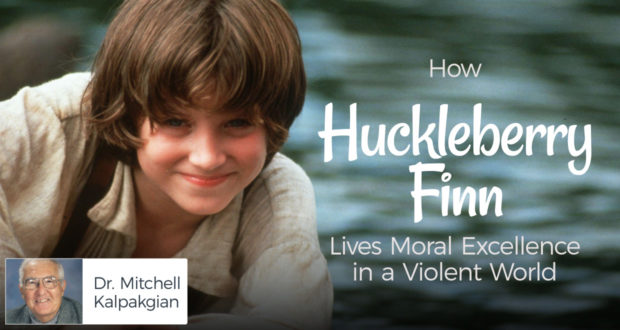 How Huckleberry Finn Lives Moral Excellence in a Violent World

How does one live in the world but not be of the world? How does one grow up in a lawless society exposed to injustices in vicious forms and still preserve one’s innocence and integrity? How does a person live in the midst of murderers, swindlers, scoundrels, and bigots and not fall into temptation?

How does one live with a pure, kind heart while noticing the many cruelties inflicted by hard, cold hearts? How does one pursue a heroic, noble life in a culture of cowards, dupes, and sentimentalists who lack moral courage and manly honor?

Huckleberry Finn’s moral excellence transcends the mediocrity of worldly standards that lower man to a creature of conventions, a member of a mob, or an apathetic “average man.”

Huck Finn lives in a violent world. Wherever he travels in river towns or on the Mississippi River, he encounters evil in many crude forms. His drunken father Pap confines him to a cabin and threatens him with a gun if he dares to escape. He witnesses a sinking riverboat with a man left on board to drown by fellow gamblers.

Witnessing a family feud between the Shepherdsons and the Grangerfords, Huck sees an innocent boy, his friend Buck, killed by a random bullet. Huck is repelled by the ugliness of evil: “I ain’t agoing to tell all that happened—it would make me sick again if I was to do that. I wished I hadn’t ever come ashore to see such things.”

He sees two confidence men calling themselves the Duke and the Dauphin rob and cheat entire towns by posing as Shakespearean actors or as missionaries to the pirates and even pretending to be uncles from England with British accents to cheat three young sisters from their father’s inheritance: “It was enough to make a body ashamed of the human race.”

Despite the corrupt, lawless society that affects his daily life, Huck never becomes desensitized or hardened by the barbaric evils that inhabit his ordinary life.

Injustice prevails everywhere. Huck is in shock when he watches Colonel Sherburn cold-bloodedly shooting poor Boggs, a harmless drunkard, right on the main street of the town and then intimidate a whole crowd determined to lynch him. Sherburn dares them to approach as he loads his gun and calls them cowards, taunting them as pitiful members of a mob: “Now the thing for you to do, is to droop your tails and go home and crawl in a hole.”

Huck also lives with the grim evil of slavery and the sordid business of trafficking in human beings, paying for slave hunters, and selling black mothers and fathers “down river” for a profit. Despite the injustices, violence, and dishonesty that comprise his everyday world, Huck maintains his innocence in a corrupt world.

He never loses his moral sense, compromises his idea of justice, or ignores the knowledge of right and wrong written on his heart and conscience. Huck is not ruled by the customs, conventions, and biases of his age.

While Huck lives in a culture of legalized slavery that considers the plantation workers property or “chattel” owned by masters, Huck cherishes his friendship with Jim, a slave that Huck protects from the law as he hides Jim on his raft and leads him to freedom in the North. Huck suffers a moral conflict between the human law that forbids giving aid to escaping slaves and the natural law that forbids Huck from acting against his conscience.

He feels guilty in disobeying man’s law: he helped a slave gain his freedom, and he allowed a poor old woman’s servant to escape. To alleviate his troubled conscience, Huck even writes a letter to Miss Watson reporting information about her runaway slave that will allow Jim’s capture.

But then Huck remembers the kindness and gratitude of Jim—how he would “do everything he could think of for me, and how good he always was” and recalls Jim’s words: “I was the best friend old Jim ever had in the world, and the only one he’s got now.”

Realizing he cannot “pray a lie” and pretend to feel guilty in defending Jim from the law, Huck then rips the letter, imagining the punishment that awaits him: “All right, then, I’ll go to hell.” While many in the novel like the cultured Grangerfords appear moral in public by attending church but act immoral in private by feuding, Huck’s goodness is pure and authentic, never affected or hypocritical.

Huckleberry’s integrity and moral principle, then, go beyond the conventions and customs of his society that practices discrimination and legalizes unjust laws. A boy with moral courage, Huck does not belong to the category of person whom Colonel Sherburn defines as the cringing “average man” that cowers with fear when Sherburn threatens to shoot the mob determined to lynch him: “The average man’s a coward” and “the average man don’t like trouble and danger.”

Huck, on the other hand, proves his valor throughout the book, especially when he dares to return the stolen money in the possession of the Duke and the Dauphin to Mary Jane and her sisters—a risk that endangers his life.

An honest realist, Huck also avoids the gullibility and sentimentality of fools who stupidly believe in the lies of the Duke and Dauphin posing as actors, missionaries, or Englishmen. These folks let their emotions cloud their judgment and fall into hysterical fits at the Pokeville Camp Meeting, “the people groaning and crying and saying amen” as “they sung, and shouted, and flung themselves down on the straw, just crazy and wild.”

These pretenses of religious feeling and moral sentiments Huck calls “tears and flapdoodle” and “soul butter and hogwash”—exaggerated, false displays of emotion he defines as “rot and slush.” Huck, however, is ruled by common sense and not by sentimentality and expresses honest human feelings and not pretentious sentiments.

He never whitewashes the ugliness of evil or denies the baseness of selfish men who live only for their own profit and pleasure. “I never see anything so disgusting,” Huck remarks when he witnesses the greed of the Duke and Dauphin robbing children of their father’s inheritance.

The Ideals of the Excellent

Like a true hero Huckleberry knows and acts, never failing to use his intelligence or exerting an honest effort—two virtues that are glaringly absent in Huck’s world. Neither naive nor superstitious, he thinks before he acts, never reacting with irrational impulses like the members of a mob.

He acts with noble intentions, never out of self-interest like the scheming Duke and Dauphin. Full of zeal and energy, Huck seizes every opportunity to do a good deed, never avoiding trouble or escaping to live in safety and security. He defends Jim from the slave hunters, he restores the three sisters’ rightful inheritance, and he tries to save a man from drowning on a sinking steamboat.

He loves goodness for its own sake and knows virtue is its own reward. Unlike the loafers who waste all their time in the mindless entertainment of encouraging dog fights, or exchanging “chaws” of tobacco, Huck never succumbs to the idleness and sloth of adult men with nothing to do but sit in front of stores whittling wood, chewing tobacco, “and gaping and yawning and stretching—a mighty ornery lot.”

Huck, then, proves that the ideals of the excellent, the heroic, and the honorable define civilization, not the conventions of a society, the members of a crowd, the unjust laws of a government, or the prejudices of an age.