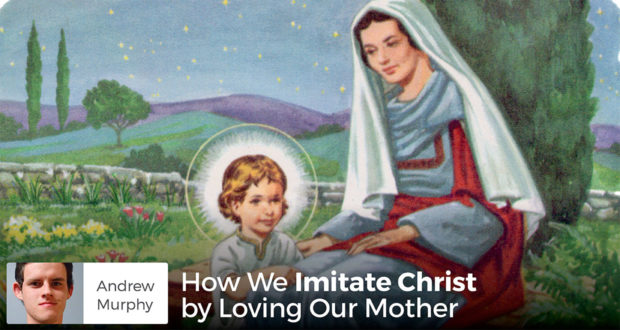 How We Imitate Christ by Loving Our Mother

How does Jesus teach us to honor our mother? 2014 Seton graduate, Andrew Murphy, reflects on Christ’s love for Mary and how we can imitate His example.

In the month of May, which is dedicated to Our Lady, we celebrate Mother’s Day. During this special time, let us reflect on the way that Christ loved His own Mother, an example we would do well to follow.

In his book, Life of Christ, Venerable Archbishop Fulton J. Sheen speaks of how before the Incarnation, people looked up to heaven as a distant place above them.

However, after Christ’s birth, His mother Mary could nurse the God of the universe in her arms, and look down at heaven resting in her lap.

This is a fascinating image to contemplate. The fact that our Creator loves us so much that He would take on our lowly nature as a Child in His mother’s arms is astonishing.

Christ’s Obedience to His Mother:

In St. Luke’s Gospel, we read that after being found in the temple, Jesus went back to Nazareth with Mary and Joseph and was obedient to them (Luke 3:51). We remember that Jesus’ public life lasted only three years, while the majority of His life was spent in obscurity. Nevertheless, He was teaching us even during his hidden life.

For example, Jesus Christ, the Second Person of the Blessed Trinity, was obedient to His parents, just as we are also called to be. As Archbishop Sheen states, Christ did this “to sanctify and exemplify human obedience, and to make up for the disobedience of men” (Life of Christ, 55). Thus, God submitted Himself to His own creatures, showing us the way we should honor and obey our parents.

When the wine ran out at the wedding feast at Cana, Mary mentioned this to her Son. He responded, “Woman, what is that to me and to thee? My hour is not yet come” (John 2:4). Archbishop Sheen explains that here Christ is asking His mother to consider what will happen to both of them if He performs a miracle and begins His public ministry now.

Doing so will begin Jesus’ journey to the cross, and His mother will accompany Him during His sufferings as a sword pierces her heart. Hence, Bishop Sheen says that this incident at Cana is one of two occasions where Christ’s human nature appears unwilling “to take on His burden of suffering”(Life of Christ, 87).

Thus, it was at His Mother’s urging that Jesus turned water into wine and performed His first miracle. By His obedience, Christ shows us how to live out the Fourth Commandment, to honour our father and mother.

Christ’s Love of His Mother:

After Christ completed the three years of His public ministry, He was lifted up on the wooden cross, which at that time became the throne of the King of Kings. Beaten, bruised, battered, and with His clothes torn from His back, Jesus had nothing left to give us but His Mother.

There she stood at His feet, ever faithful, with the disciple John beside her. Christ then said to her, “Woman, behold your son” (John 19:26), and to John He said, “Behold your Mother”(John 19:27). In this way, Our Lord gave Mary to John that he might be her protector, and He also gave her to all of us as our mother.

Non-Catholics are often confused by the great honour which Catholics give Mary, but the reason for honoring her is simple. By having a special devotion to Christ’s mother, we please Him by imitating His love for her.

Our Love for Our Mothers:

Moreover, just as Jesus loved His Mother, so we should also love our mothers. They brought us into the world and gave us our lives.

We can never repay them for the gifts they have given us. Hence, they deserve our great respect and love, not just on Mother’s Day but every day of the year.

As Christ honors His mother as the Queen of Heaven, let us honor our mothers as the queens of our homes.

Homeschoolers have an abundance of opportunities to show love for their mothers. Let us resolve to take advantage of these daily opportunities.

God has shown us how to love our mothers, and what better example could we ever hope to find?

Andrew graduated from High School with Seton in 2014 . He is the eldest of five children with a brother and three sisters. Some of his interests include reading, (especially Chesterton, Tolkien & C. S. Lewis), film making, bush walking/camping and writing – some which may be found on his blog; Thoughts for the Journey Thoughts For the Journey.He is also working on a short work of fiction (in the style of Tolkien's The Hobbit) which he hopes to publish by the end of the year.
andrew andrew murphy Christ father honor love miracle mother's day mothers murphy obedience wedding at cana 2016-05-22
Contributing Writers