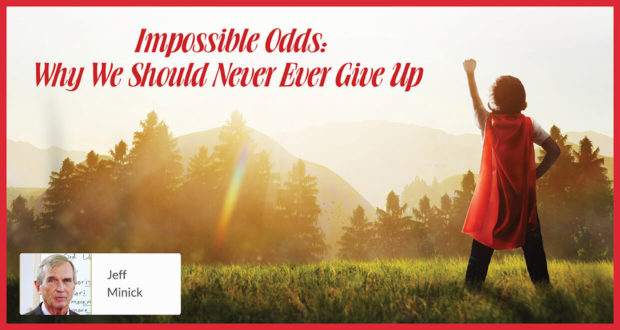 Impossible Odds: Why We Should Never Ever Give up

Use the two traits of these three heroes to help stand up for your faith and freedom in an age that wants you to give up.

On this night, one lone Virginian was on a mission.

On this same night, the daring but infamous British Colonel Banastre Tarleton and 200 dragoons were riding toward Charlottesville.

He, too, had a mission: to capture the state’s governor, Thomas Jefferson, and the members of the legislature who had gathered in Charlottesville to escape the troops of General Cornwallis.

Having driven his dragoons at a hard pace, Tarleton and his men paused to rest and refresh themselves near Louisa County Courthouse.

But Jack Jouett rode through the night.

By early morning, he had put forty miles behind him and was pounding on the door of Jefferson’s home, Monticello. Having alerted the governor to the danger, and after drinking a glass of

Madeira offered him by Jefferson, Jouett remounted his horse and rode to nearby Charlottesville, where his warnings saved most of the legislators from capture. Interestingly, among the handful apprehended by Tarleton later that day was American trailblazer Daniel Boone.

Jefferson himself barely escaped the British. Today, one wonders what he thought as he left Monticello just ahead of the approaching enemy cavalry. Would the British troops burn his estate to
the ground?

Tough times, yes, but the Americans won the Revolution.

The 36-year-old priest stood erect after kneeling and saying his prayers. He refused a blindfold and, holding a rosary in one hand, and a crucifix in the other, squarely faced the firing squad assigned to shoot him and forgave them. As they lifted their rifles to fire, he spread his arms and cried, “Viva Christo Rey!” meaning “Long live Christ the King!” When the volley failed to kill him, a soldier approached the wounded priest and delivered the coup de grace.

The tyrannical Mexican government falsely accused Father Miguel Pro of participating in an assassination attempt. President Calles ordered him executed without trial. This same government had driven large parts of the Mexican Church underground and severely restricted all its functions, yet brave priests like Father Pro helped inspire the people and kept the faith alive.

And that faith remains very much alive today.

Standing in the Gap

A 21-year-old, scarcely more than a girl, her brother Hans, and their friend and father of three, Christoph Probst, were accused of treason for distributing anti-Nazi leaflets at the University of Munich and other nearby places. A kangaroo court ordered their execution by guillotine. Before the blade ended her life, Sophie Scholl is reputed to have said either “The sun still shines” or “God, my refuge into eternity.”

Heavily influenced by Catholic friends and by writers like Cardinal John Henry Newman, Sophie Scholl and others, most of them students or artists, had founded the White Rose to resist Nazi totalitarianism. Sophie and Hans were raised as devout Lutherans but were drawn to Catholicism before their deaths. Christoph Probst was baptized as a Catholic minutes before his execution.

Evil times once again, but the thousand-year Reich predicted by the Nazis ended in destruction after only twelve years.

All three of these heroes shared two character traits: they displayed courage in the face of adversity, and they opposed tyranny.

And now seems like the time to remember them and the untold thousands of others who have stood fast for the good, the true, and the beautiful.

In many countries around the globe, Seton families feel besieged by attacks on their faith and homeschooling and by what Pope John Paul II called “a culture of death.”

Totalitarian governments typically treat their people as no more significant than blades of grass, but now even our democracies view citizens as digits rather than souls.

All too often, these elected officials and bureaucrats treat us like statistics and numbers rather than as men, women, and children with hopes and dreams. Even worse, these earthly elites presume to know what’s best for us.

How do we take a stand for our faith and our freedom in such an age?

Living the Faith, Loving Our Families

Here are just a few suggestions:

Embrace the faith as Christ embraced his cross. Shortly after I joined the Church at age 40, someone said, “It’s not easy being Catholic.” I agree, but it’s even more challenging in an era when Christianity itself is under attack. We must look to the saints and the heroes of old for strength and inspiration.

Make your family a headquarters of hope. Totalitarian governments of all stripes despise the family because they know it supersedes the needs and demands of the state. The old axiom “An Englishman’s home is his castle” should apply to every home around the globe.

Parents serve many purposes in their children’s development, but surely one reason ranks at the top. Years ago, I interviewed a homeschool mom for our diocesan paper. When I asked why she was homeschooling, she answered without hesitation, “To help my children get into heaven.”

Remember, your soul belongs to God, not to a government or a political ideology.

Cynic, satirist, and at best an agnostic, American journalist Ambrose Bierce once wrote, “Christians and camels receive their burdens kneeling.” Bierce probably intended this comment sarcastically, but we Catholics should take it to heart. We do indeed receive our burdens kneeling.

I would go a step farther and declare that Christians and camels resemble each other in another way. Both dromedaries and Catholics possess the equipment for making their way across a desert.

When God lives in our hearts, when Mary and all the saints stand by our side, and when we avail ourselves of the sacraments bestowed on us by Christ, we can traverse any political and cultural wasteland, be it as vast as the Sahara.

Jeff Minick has four children and a growing platoon of grandchildren. For 20 years, he taught history, literature, and Latin to seminars of homeschooling students in Asheville, NC. Today, he lives and writes in Front Royal, VA.
catholic Examples to Emulate heroes homeschooling Impossible Odds jeff jeff-minick living the faith Loving Our Families minick Murder Makes a Martyr Never Ever Give up pope John Paul II Standing in the Gap 2022-07-01
Contributing Writers