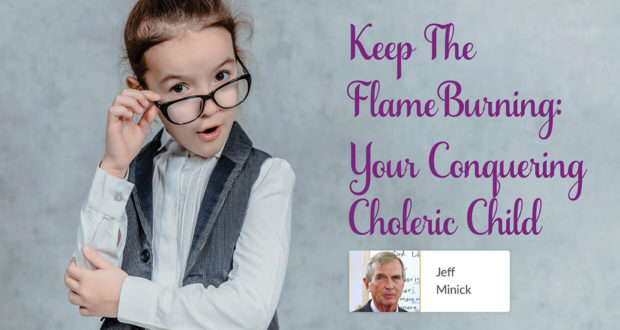 Wise homeschool parents involve their choleric students in planning their school year as these kids do best when they have some control over their learning.

I was in seventh grade at a military academy, a friend of mine used to walk the hallways bellowing “I am the king! Who dares defy me?”

That rowdy proclamation might serve as the motto of a choleric personality.

The Ancient Greeks once classified everything according to four elements—earth, wind, water, and fire—and extended those classifications to personality types. Cholerics were fire, living flames burning with energy and ambitions, easily inspired, quick to learn, to lead, and to dominate.

Nine-year-old Johnny takes charge of his gentle sister, eleven-year-old Maggie, and their younger siblings, as if he were Napoleon on a battlefield, dictating what games they will play and what books Maggie may read to them. In school, he is goal-oriented, whipping through his daily lesson of Saxon math—he’s a year ahead of his grade level—while sweet Maggie is still getting her books together and arranging paper and pencils on her desk.

Johnny asks lots of questions—he doesn’t like tackling a task without knowing its meaning and import—he becomes impatient when things don’t go as planned, which often means when things don’t go his way, and he loves competing against others on the soccer field and in the swimming pool.

Like Maggie, Johnny’s mother is easy-going, loves peace and harmony, dislikes confrontation, and tends to be reticent at parties, all elements of the phlegmatic personality.

Though she treasures Johnny’s drive and his eagerness to achieve, Johnny’s mother also worries about the way he bosses around his sister and his friends, his flare-ups of temper when something goes amiss, and his constant questioning of her authority. “The kid’s going to be a great lawyer,” husband Sam cracks, but Sam doesn’t bear the brunt of Johnny’s day-long interrogations.

In The Temperament God Gave Your Kids: Motivate, Discipline, and Love Your Children (Our Sunday Visitor, 2012, 187 pages), Laraine and Art Bennett advance these personality traits as characteristic of cholerics: born to lead, goal-oriented, bossy, always right, to the point, impatient, practical and drama-free, and a “just do it” attitude.

The Bennetts, who are Catholic and former homeschooling parents, spend the first part of Chapter 2, “The Conquering Choleric Child”, looking at these different parts of the choleric personality, and then suggest the learning style best fitted to these bundles of energy.

The best sort of situation for cholerics is one in which they feel they have at least some control over their learning material and environment. Wise homeschool parents should involve these students in planning their school year, their choice of subjects, or their daily schedule, depending on their age.

A program that allows the student to progress at her own rate affords her the opportunity to speed ahead, quickly mastering the introductory topics so as to delve into the more challenging modules. Other temperaments might lose motivation with nonstructured, independent learning, but not the self-motivated, competitive choleric student.

The Secret to Discipline

Next, the Bennetts give advice on disciplining the choleric child. Cholerics, they contend, respond best to reason and competition. Instead of ordering that strong-willed four-year-old to pick up his toys, they suggest making a contest of it: “Let’s see if you can pick up ten toys before the timer goes off.” Parents can teach even young cholerics patience and perseverance, two qualities they often lack, by words of encouragement and by modeling such behavior themselves.

As they grow older, choleric children perform best when given logical reasons for certain tasks. If Xavier doesn’t want to eat that fruit salad, explain the benefits of a healthy diet. If Annie fights with you about bedtime—“My friends all stay up till eleven on school nights!”—give her evidence of the importance of a good night’s sleep. “Overbearing and controlling parenting is never optimal,” the Bennetts write, “and it is more likely to provoke the choleric child to angry rebellion than any other temperament.”

In “Discipline for Cholerics,” the Bennetts offer this interesting thought regarding older cholerics: “Punishment (grounding, taking away privileges) is not always effective: cholerics can outlast you. They are strong-willed and often dig in deeper. Allowing them to suffer natural consequences is often more effective.”

To allow our children “to suffer natural consequences” can be tough and sometimes impractical. When five-year-old James whacks his little sister, the natural consequences may be time standing with his face in a corner of the kitchen. But when our teenager forgets to bring his lunch to a summer camp, perhaps the best approach is to let him go hungry that day rather than making another drive into the countryside.

In another section of Chapter 2, “Cooling Off,” the Bennetts explain the importance of responding calmly and reasonably to the choleric. “The choleric child has a naturally strong sense of self, which is often manifested in stubbornness and pride.” Often, as the Bennetts point out, cholerics have trouble controlling their tempers and react strongly to criticism or failure.

Because they are head-strong and sometimes rush into situations, cholerics also need training in prudence, in making wise decisions. Parents must teach them by way of faith and the virtues how to choose a worthy goal.

At the end of “Your Conquering Choleric Child,” the Bennetts sum up with these helpful “Keys:”

All our children are a mix of the four temperaments—choleric, melancholic, sanguine, and phlegmatic—yet usually one of these temperaments dominates a personality. Recognizing a child’s temperament can enhance his education and his growth in character.

Are you unsure of a child’s temperament? At the end of the Bennett’s book is a “Temperament Test For Kids.” They also have a free online quiz at TemperamentQuiz.com where you can discover your own temperament.

Insight from a Seton Mom

When I started homeschooling, it became clear I had a different temperament than my children. I am a phlegmatic/melancholic and teach children who are choleric/sanguine.

As a phlegmatic, I am calm and easy-going, an advantage in homeschooling because I am patient and diplomatic when conflicts arise between my children. I am willing to look for solutions to things that are not working and can change course as well as try new approaches to teaching. This flexible attitude is perhaps the strongest virtue of the phlegmatic temperament because when something fails, we do not dwell on it, but find ways to move forward

However, being phlegmatic also means I tend to withdraw and internalize conflicts I cannot easily solve, which can lead to a loss of temper later. I must be careful about being too sensitive and have to guard against taking conflicts personally or getting my feelings hurt.

Homeschooling children with different temperaments can be challenging, but also brings many blessings. My children are fun and funny, and we often have delightful conversations around the school table. I am blessed to be able to teach smart, passionate, and driven children and am grateful for the opportunity God has given me.