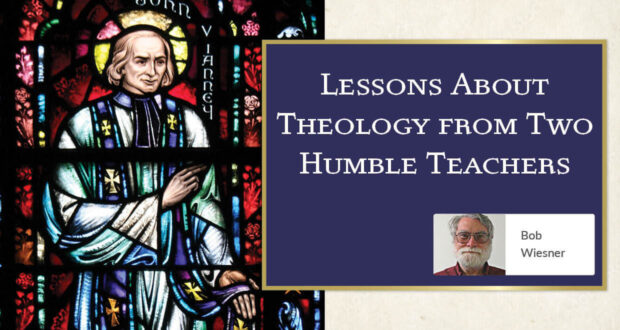 Two humble saints show us why we must travel beyond merely knowing “about” God and come to know intimately the Three Persons Who IS God.

Satan knows much more about theology than any human being could in this life. He also knows more about loving God, as well as about serving Him.

There’s something about that word “about”…

Certainly, Satan knows all about the mechanics of theology; after all, he has been in the direct presence of God in ways we, in time, can comprehend only in the vaguest way.

But the devil’s knowledge does him no good. Despite his superior intellect, he insists on loving himself more than God and refuses to serve Him. Satan can do no other; he made his disastrous decision in eternity, and, quite literally, he has no time to repent of his misstep.

Only knowing “about” theology is somehow to miss the mark; treating theology as simply some advanced intellectual exercise does not further the interests of either God or the human person. In short, there are missing components to the salvific equation in such an approach.

St. Thomas Aquinas is considered the greatest theologian ever produced by the Western (Roman) Church.

Near the end of his life, St. Thomas reflected on his work and realized that in comparison to the reality of the awesome God, his work was akin to straw or chaff blown by the wind.

Thomas’s Summa is a colossal work of service to God and His Church, but equally, the saint came to know the true worth of theology produced merely on an intellectual level. In so concluding, St.

Thomas lifted his status from religious philosopher to the heavenly plane of true theologian.

On the far other end of the intellectual spectrum are the curious figures of St. John Vianney and St. Joseph of Cupertino, the flying friar. A somewhat reluctant bishop ordained the Curé of Ars under what most would consider miraculous circumstances and immediately sent him to an obscure parish where it was thought he could do little harm to souls or the Church.

As it happened, his subsequent career proved to be of immense value to enormous crowds of penitent sinners and a direct refutation of demonic intellectual pride. A priest of strictly limited intellectual resources, the holy Curé was a spiritual warrior of the highest caliber.

What the Humble Saints Teach Us

Similarly, St. Joseph was never able to master the intricacies of academic theology; in fact, there seems to be some evidence indicating that he was a bit mentally challenged!

The holy friar was ordained after years of living in several Franciscan monasteries and strict investigations by many spiritual authorities, including the Inquisition.

He was suspected of witchcraft by some due to his unusual habit of levitating at times of “prayer and sly trickery” in the interests of living off the charity of his brothers in the friary.

In the end, there was no denying his genuine devotion to prayer and service despite his lack of understanding of academic theology.
St. John and St. Joseph were terrible theology students, but both proved to be superb theologians in the end.

The Seton curriculum offers students a great deal of knowledge about God, far greater than virtually any parish program. Indeed, learning about God is valuable, and studying Doctrine, Scripture, Apologetics, and all the other branches of academic theology should be undertaken with zeal, energy, and even joy.

But all should realize that the intellect is really but a springboard. A Christian must utilize the will to dive from that springboard into the deep waters of true theology and travel beyond merely knowing “about” God and come to know intimately the Three Persons Who IS God.