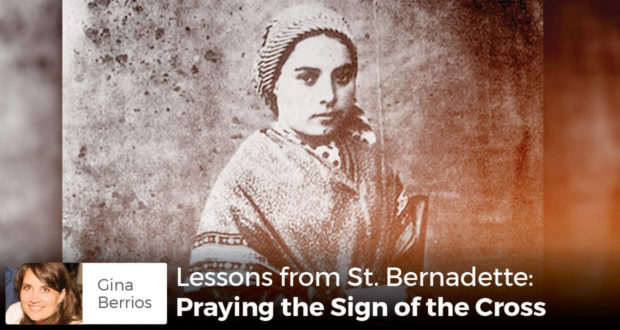 Lessons from St. Bernadette: Praying the Sign of the Cross

Gina Berrios shares lessons from St. Bernadette including how to make the sign of the cross which the young saint learned from the Blessed Mother herself!

Known throughout the world as the saintly visionary of Our Lady at the miraculous grotto in Lourdes, St. Bernadette Soubirous lived a life of humility and simplicity.

She provides us with key lessons on the ways of the devout life. Because of her simplicity, these lessons resonate especially with children.

I would like to explore her spirituality and offer several lessons from St. Bernadette that we can pass on to our children. The first is how to pray the sign of the cross.

St. Bernadette grew up in utter poverty. At the time of the miraculous visions at the grotto, her family was living in a former jail cell termed “the dungeon.” Bernadette had to care for her siblings so that her parents could work.

Her own education was completely neglected. Learning the Catechism was so difficult that she was not able to receive her First Communion until she was 14, after the visions of Our Lady. 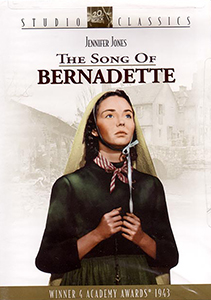 In fact, so simple and uneducated was she that when the Blessed Mother told Bernadette, “I am the Immaculate Conception,” Bernadette did not know what the term meant and had to repeat it to herself often so that she could remember it to tell her priest. In the book Saint Bernadette Soubirous, her biographer Abbe Trochu tells how her classmates used to tease her: “Ask the Lady, then, to help you learn your Catechism” (p. 62).

A learned theologian, Bernadette was not. But the way she lived and prayed spoke more theology than any book. Her outward expression of her interior prayer life was a catechesis to those around her. Let us look at her teaching on praying the sign of the cross, and why we should impart her teaching to our children, especially from a young age.

Here is what was said of how Bernadette made the sign of the cross:

“In the presence of the Lady, Bernadette continued her Rosary. When she finished it, she tried three times to lift her fingers, which held the crucifix, to her forehead, but she could not. But on the next attempt she made a beautiful sign of the cross such as I had never seen anyone else make. I asked her later why she had only been able to make the sign of the cross on the third attempt. She answered: ‘Because it was only then that the Apparition, having finished running the beads through her fingers, had herself made the sign of the cross’” (p. 140).

Bernadette learned how to make the Sign of the Cross from the Blessed Mother herself!

After this Apparition, those around her, especially her parents and the nuns who taught her, noticed a change in Bernadette. Abbe Trochu wrote, “She had not been favoured in vain with heavenly visions and instructions: already people were marveling at her sign of the cross, which summed up the whole of her theology… this little girl, though she did not know her ABC, had understood the great duty of reparation and prayer” (p. 148).

Her confessor, Abbe Pomian, granted permission for Bernadette to receive her First Communion after the Apparitions. Trochu wrote, “to all appearances the little Soubirous girl was the most ignorant of the schoolgirls, but her confessor discerned that her vision had given her an insight into the mysteries of the Faith beyond her years.… at prayer the Sisters detected in her eyes a bright gleam that they did not find in those of her young companions. Bernadette’s supernatural life had grown apace” (p. 209).

“The nuns placed her in front of them during prayers and Mass and noticed nothing out of the ordinary in Bernadette’s piety; and that is easily explained, for [she] did not like multiplying external signs of devotion. But there was still the lovely sign of the cross which, whether in public or when unobserved, she always made with a sort of majesty. And the Sisters knew from whom the ignorant daughter of miller Soubirous had received her lesson!” (p. 221)

Another time, Bernadette was asked to tell a group of school children about her visions. “Standing up at the teacher’s desk she began with the sign of the cross. ‘Always make it like this,’ she advised them; ‘that is how the Blessed Virgin made it at the first Apparition’” (p. 241).

As a novice at Saint-Gildard, Bernadette gently reprimanded a fellow sister who was hurriedly signing herself upon entering the chapel. Bernadette said, “You make the sign of the cross badly. You must see to that, for it is important to make it well” (p. 235).

Mother Marie-Therese, the novice master, took note of what the other novices said of Bernadette. “They were edified by her piety and enchanted by the simplicity of their new companion. Her sign of the cross, made slowly with her hand carried well out to the tip of each shoulder, ‘undoubtedly as she had seen the Blessed Virgin make it’, had been a revelation to all of them” (p. 261).

Later, as a professed sister, her sign of the cross still stood out. It was noted, “Likewise in matters of piety, although she did ‘what all the others did’, she put into her devotions a sort of supernatural richness such as no one else did. She did not make the sign of the cross more frequently than her companions, but she made it with impressive dignity” (p. 338).

And in the hours before her death at the age of 35, even then a note was made of her sign of the cross. In complete agony, her body ravaged with sores and her bone decaying from a knee tumor,

“Once more she stretched out her arms like her crucified God; then she said: ‘I thirst.’ When one of the Sisters approached to give her a drink she found strength to make one last gesture, her majestic sign of the cross” (p. 370).

This simple saint had “heaven half opened to her,” and for the rest of her life, she blessed herself with a beautiful sign of the cross. Let us imitate her example and reverently pray the sign of the cross ourselves. Our Catholic Faith is a treasure. With hearts of gratitude, let us teach it to our children.