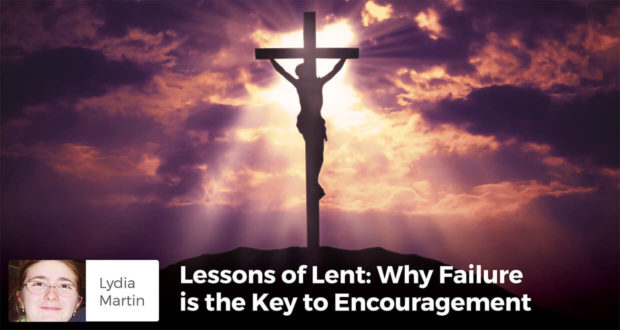 Lessons of Lent: Why Failure is the Key to Encouragement

As we reach the climax of Lent, Lydia Martin shares an experience which reminds us of the true paradox of Christ’s failure and conquest on the Cross.

When you fail, other people fail, God disappears, and it seems like life can’t get any worse

This weekend at my parish, they covered over all the statues in purple cloth for the last two weeks of Lent. They look very ghostly, especially since the purple cloth wasn’t big enough for Mary and St. Joseph, so they have sort of lilac-y blue sheets. At any rate, with the sacramental life in shrouds, it seems like an appropriate time to talk about failure and spiritual darkness.

If you’re like me, there are times when the spiritual world goes blank. Sometimes, it seems random, but often, it goes hand in hand with ordinary emotional darkness. Chaos in personal achievement, sickness or death in the family, major life changes, there are many things and many levels of things that can cause it.

And we start to wonder: “Where the heck is God in all this?” Well, I hate to break it to you, but He’s up there on the cross. Behind the purple thing. Dead and you can’t even see him.

Granted, He’s also in the Tabernacle, alive and well. And He’s also in the thousand details of daily life. But it’s quite impossible to appreciate a paradox, unless you’re willing to look at the full picture. And the paradox of God’s glorious presence in suffering begins… well, in suffering.

The Paradox of Beauty and Ugliness

A group from my college went to D.C. for the March for Life this year, many of them homeschool graduates like me. While there, we visited some of “the sites.” The two that stood out for me were the Smithsonian art museum and the John Paul II Shrine.

The art museum, though theoretically secular, is full of Italian altarpieces. I can’t tell you how many times I saw the crucifixion and various gory depictions of martyrs. And I wondered, as we went about admiring them, what the secular world thinks.

Because for my friends and I, raised with the Christian paradox of salvation and life out of death, it was very matter-of-fact. But to the rest of the world, it’s got to look like Christians (and Catholics, in particular) have a dark and creepy obsession with suffering. Why would we want to paint such objectively ugly things?

But at the JPII shrine, there were a lot of mosaics in the chapel. One of them was of Cain and Abel, specifically of Cain holding Abel in a very violent and uncomfortable looking position. And there we balked. We didn’t like it. We said it was ugly.

Granted, it was a bit modern, and there’s a certain amount of taste involved, but when I pointed out that objectively speaking the Crucifixion is ugly, one of them flashed back: “No it’s not! The Crucifixion is beautiful!”

Whence the divide? The crucifixion, as depicted in art, is a mostly naked man nailed to a cross and either dead or dying, with varying levels of gore involved.

Now, you and I know the event being depicted is the salvation of the world, which was what my friend was trying to remind me. But Abel was the first martyr, killed for his closeness to God. And we said that was ugly.

The Paradox of Ugliness and Failure

Why did we think the Crucifixion is beautiful and the martyr ugly? Is not Abel’s death the first foreshadowing of Christ’s innocent death on the Cross?

The truth is, Abel’s death was ugly. The mosaic depicting it was, therefore, necessarily ugly. And we were shocked by it. We were shocked because it isn’t usually depicted. As Catholics born and bred, this little group of devout homeschoolers on pilgrimage discovered something in that chapel that we could not see in the common crucifix.

We saw the scandal of the Cross.

Abel points to the cross and the blood that speaks more eloquently still. And what we learned from Abel, in that moment in the JPII chapel, was that the Cross was ugly. The Crucifixion was ugly.

It’s easy to forget, because we know the end of the story. We know the Resurrection. But the paradox is, unless we grasp the ugliness of the Crucifixion, we are barred from seeing its true beauty.

The Crucifixion combines two essential and opposite needs of the human heart that, in literature, are met by the opposite forms of the tragedy and the comedy.

Tragedy is our deepest depths, the dark place of the soul and of human experience and existence. Tragedy is the wild realization of how far human free will can go, how unchecked it is by any but the doer. And on the stage or on the page, villains rise and innocents fall, and we accept and even admire because we know it’s true.

And something in us responds to the hopelessness of tragedy because that’s true too. Life is hopelessly full of pain. Tragedy is real.

And the Cross is the ultimate tragedy enacted by human free will: the God who chose to die rather than violate free will and the men who chose to kill Him lest He disrupt their sinful lives any further.

Now comedy, on the other hand, is the desire of the human heart for what should be: the hope that sees there are other things than tragedy.

There is a lightness and gaiety in life. In comedy, the happy ending comes as a sudden turn, a surprise, and often almost as an accident but always as a gift.

That, too, is a reality. Good things are light and lovely, and a gift, either a gift we give or a gift we are given; we in the audience can laugh because we thought everything was going wrong, and suddenly, it all went right.

It needn’t have, but it did. And in this sense, comedy is also part of the Divine reality of man: that we were created as a gift, and every good thing we have is a delightful surprise.

But the best comedies are those that come closest to being tragedies.

The Revelation of Comedy by Tragedy and Beauty by Ugliness

The crucifixion is beautiful for the meaning of God’s love in His free sharing in tragedy and for the reality of the resurrection. The Crucifixion is the ultimate failure reversed by the most impossible gift.

The Crucifixion was really ugly.

But Jesus also rose from the dead.

The Resurrection is beautiful because it came after the ultimate darkness. We would not be satisfied if God said, “Oh wait guys, I just made it look like he died. Presto change-o! Here He is, back again and fine!” No, Jesus died, and even in His glorified body, He bears the marks of his suffering.

Dealing with the Spiritual Shroud

Again, when you’re like me and the world seems dark, you try to fix it. If you’re like me, you try to say it’s your fault for not having enough faith, or there’s just something you’re doing wrong, and if you change yourself, you will feel good again, and you can make God come back out of hiding in the tomb, and everything will be just fine.

So the good news is, when you are suffering, and when you fail, you’re like Jesus.

But we can’t see that until we see the whole picture of darkness. The paradox has two sides, and we have to see both to get either. The highest does not stand without the lowest. It’s ok to be sad.

It’s ok to experience darkness and failure. It’s ok to feel abandoned by God and betrayed by man. Jesus did.

Hang on for the last bit of Lent. The worst and the best are still to come.

Lydia Martin is a recent graduate of Seton. She is the fourth of seven children, and lives with her parents in Royse City, Texas. She is a bookworm, loves to cook (sometimes while reading) when she isn't writing, and has an ambition to become not only a writer, but a novelist. She is considering joining the Dominicans of St. Cecelia in Nashville.
comedy crucifix failure glorified body Jesus lent lydia lydia-martin martin resurrection salvation spiritual shroud tragedy ugliness 2018-03-22
Contributing Writers