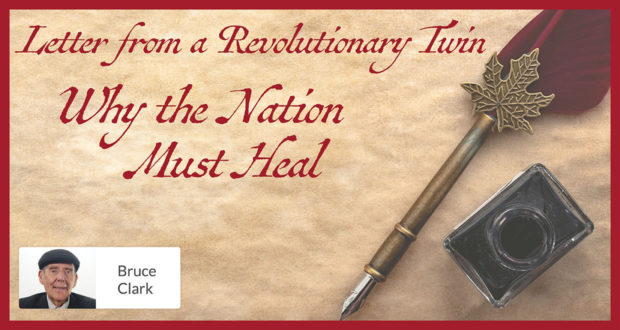 Letter from a Revolutionary Twin – Why the Nation Must Heal

Twins who fought on opposite sides during the Revolutionary War reflect that America needs all of her children to make the great dream of liberty come true.

The principal characters in my novel Redcoats and Rebel­­ are the Quinn twins, Andy and Colin, who fought on opposite sides during the Revolutionary War.

Colin was a Tory who fought for English Supremacy, Andy was an American patriot fighting for a free country. I wrote a letter based on what Colin might have said to Andy after America won her freedom.

Since we parted on that morning so long ago, Our Blessed Lord certainly has watched over us and protected us. A great many good men on each side, including our dear friend, Walter Butler, died for causes in which they believed. In six years of war, I saw hundreds of boys learn all about death before they had a chance to learn very much about life. I’m sure you did too. I fear that those sour memories will always remain with us.

America has become an independent nation that will have to suffer through growing pains. At this point, America really is not one nation, rather, she is thirteen entities joined together by winning a victory over England and her allies. I think many of these entities will be reluctant to surrender their individuality in order to create a great nation.

To be sure, the Colonies suffered injustices under the Royal Rule. Hopefully, the leaders of a new nation can learn a great lesson from those inequities as they establish a central government. I hope they will build a strong government that guarantees rights and justice for all and devises a plan that will allow citizens to select their own chief of state and legislature. There are some words that bring a certain tightness to a man’s throat. Freedom is one of those words.

I guess my ideas sound strange, coming as they do from a former Loyalist, but America needs all of her sons and daughters to make this great dream of liberty come true. It will take some time for our wounds to heal and to allow our animosity to dissipate, but our attention needs to be focused on a bright future rather than a dismal past. The last words Walter said to me were, “You have to live for both of us now.” I’d like to believe that if he were here, he would feel the way I do.

I look forward to seeing you and all the other members of our family one day very soon. Until that joyous reunion, I remain your devoted and loving brother,

Bruce T. Clark, has been the Seton Historian since 1989. A homeschooling father of seven, Mr. Clark served as a Green Beret Captain in U.S. Special Forces and is the author of five historical novels: The Custer Legacy, The Castro Conspiracy, The Blood-Red Flag, Redcoats and Rebels, and The American Renegade.
2020-03-09
Contributing Writers