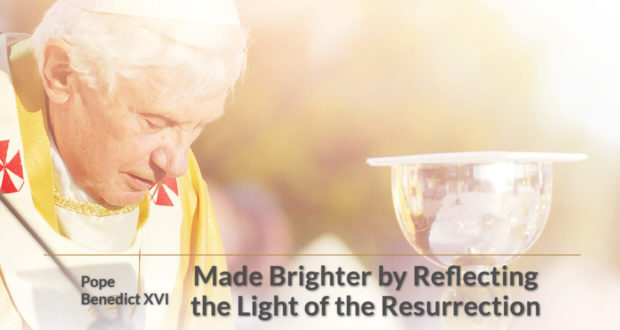 Made Brighter by Reflecting the Light of the Resurrection

Reflect the Light of the Resurrection! Pope Benedict XVI encourages us to nurture the fragile flame the Lord has lit within us, becoming people of the day.

Saint Mark tells us in his Gospel that as the disciples came down from the Mount of the Transfiguration, they were discussing among themselves what “rising from the dead” could mean (cf. Mk 9:10). A little earlier, the Lord had foretold his passion and his resurrection after three days. Peter had protested against this prediction of death. But now, they were wondering what could be meant by the word “resurrection”.

Could it be that we find ourselves in a similar situation?

Christmas, the birth of the divine Infant, we can somehow immediately comprehend. We can love the child, we can imagine that night in Bethlehem, Mary’s joy, the joy of Saint Joseph and the shepherds, the exultation of the angels. But what is resurrection? It does not form part of our experience, and so the message often remains to some degree beyond our understanding, a thing of the past.

The Church tries to help us understand it, by expressing this mysterious event in the language of symbols in which we can somehow contemplate this astonishing event. [Particularly] during the Easter Vigil, the Church points out the significance of this day. . .through the symbol of light.

Let there be Light

God’s creation – which has just been proclaimed to us in the Biblical narrative – begins with the command: “Let there be light!” (Gen 1:3). Where there is light, life is born, chaos can be transformed into cosmos. In the Biblical message, light is the most immediate image of God: He is total Radiance, Life, Truth, Light. During the Easter Vigil, the Church reads the account of creation as a prophecy.

In the resurrection, we see the most sublime fulfilment of what this text describes as the beginning of all things. God says once again: “Let there be light!” The resurrection of Jesus is an eruption of light. Death is conquered, the tomb is thrown open. The Risen One himself is Light, the Light of the world. With the resurrection, the Lord’s day enters the nights of history.

Beginning with the resurrection, God’s light spreads throughout the world and throughout history. Day dawns. This Light alone – Jesus Christ – is the true light, something more than the physical phenomenon of light. He is pure Light: God himself, who causes a new creation to be born in the midst of the old, transforming chaos into cosmos.

Let us try to understand this a little better. Why is Christ Light? In the Old Testament, the Torah was considered to be like the light coming from God for the world and for humanity. The Torah separates light from darkness within creation, that is to say, good from evil. It points out to humanity the right path to true life.

It points out the good, it demonstrates the truth and it leads us towards love, which is the deepest meaning contained in the Torah. It is a “lamp” for our steps and a “light” for our path (cf. Ps 119:105). Christians, then, knew that in Christ, the Torah is present, the Word of God is present in him as Person. The Word of God is the true light that humanity needs. This Word is present in him, in the Son. Psalm 19 had compared the Torah to the sun which manifests God’s glory as it rises, for all the world to see.

Christians understand: yes indeed, in the resurrection, the Son of God has emerged as the Light of the world. Christ is the great Light from which all life originates. He enables us to recognize the glory of God from one end of the earth to the other. He points out our path. He is the Lord’s day which, as it grows, is gradually spreading throughout the earth. Now, living with him and for him, we can live in the light.

At the Easter Vigil, the Church represents the mystery of the light of Christ in the sign of the Paschal candle, whose flame is both light and heat. The symbolism of light is connected with that of fire: radiance and heat, radiance and the transforming energy contained in the fire – truth and love go together.

The Paschal candle burns, and is thereby consumed: Cross and resurrection are inseparable. From the Cross, from the Son’s self-giving, light is born, true radiance comes into the world. From the Paschal candle we all light our own candles, especially the newly baptized, for whom the light of Christ enters deeply into their hearts in this Sacrament.

The early Church described Baptism as fotismos, as the Sacrament of illumination, as a communication of light, and linked it inseparably with the resurrection of Christ. In Baptism, God says to the candidate: “Let there be light!” The candidate is brought into the light of Christ. Christ now divides the light from the darkness.

In Him we recognize what is true and what is false, what is radiance and what is darkness. With him, there wells up within us the light of truth, and we begin to understand.

The Light of the World

On one occasion when Christ looked upon the people who had come to listen to him, seeking some guidance from him, he felt compassion for them, because they were like sheep without a shepherd (cf. Mk 6:34). Amid the contradictory messages of that time, they did not know which way to turn.

What great compassion he must feel in our own time too – on account of all the endless talk that people hide behind, while in reality they are totally confused. Where must we go?

The baptismal candle is the symbol of enlightenment that is given to us in Baptism. Thus at this hour, Saint Paul speaks to us with great immediacy. In the Letter to the Philippians, he says that, in the midst of a crooked and perverse generation, Christians should shine as lights in the world (cf. Phil 2:15).

Let us pray to the Lord that the fragile flame of the candle he has lit in us, the delicate light of his word and his love amid the confusions of this age, will not be extinguished in us, but will become ever stronger and brighter, so that we, with him, can be people of the day, bright stars lighting up our time.