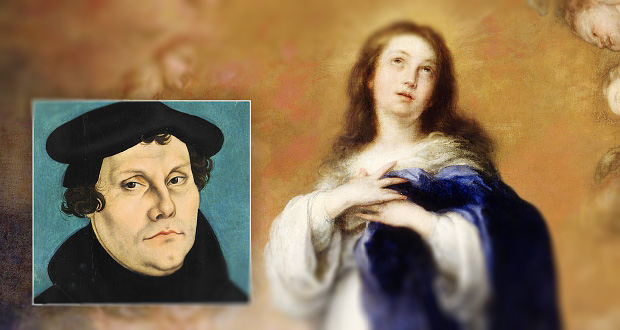 Martin Luther and the “Immaculate Purification” of Mary

As an apologist, my job often involves defending aspects of Catholic belief that are “distinctive” over against Protestantism. We’re asked why we believe thus-and-so, and the apologist steps in to provide some rationales and answers. But apologists also sometimes attempt to demonstrate common ground, and in so doing, in effect, assert, “See? We’re not that different from you in this respect.”

This is a good thing, because it fosters Christian unity.

Thus, I will often cite some “Catholic” or nearly Catholic belief held by Martin Luther (1483-1546), the founder of Protestantism, in order to show that some doctrines are not solely Catholic, since the very originator of the system held them. In fact, I’ve studied Luther so closely that in some specific areas, I’d venture to say that not one in a thousand Lutherans would be familiar with what I’ve found.

One of the most fascinating of Luther’s beliefs has to do with the question of Mary’s Immaculate Conception (her being preserved from original sin from the moment of her conception). Luther had a rather “high” Mariology in many respects.

In 1522, he wrote in his Little Prayer Book: “She is full of grace [voll Gnaden]; so that she may be recognized as without any sin. . . . God’s grace fills her with all gifts and frees her from all evil.” In a 1527 sermon, preached “on the day of the Conception of Mary the Mother of God,” Luther remarkably proclaimed:

“It is a sweet and pious belief that the infusion of Mary’s soul was effected without original sin; so that in the very infusion of her soul she was also purified from original sin and adorned with God’s gifts, receiving a pure soul infused by God; thus from the first moment she began to live she was free from all sin.” (Catholic biographer Hartmann Grisar’s translation, 1917)

As so often with Luther, however, his views evolve, or sometimes vacillate or contradict each other. This was the case on this point, though he remained far closer to the Catholic position than the general Protestant one.

In his Disputation on the Divinity and Humanity of Christ (28 February 1540), he placed Mary’s “purification” at the conception of Christ: “In his conception all of Mary’s flesh and blood was purified so that nothing sinful remained” (1992 translation by Lutheran Eric W. Gritsch).

In 1543, in his work Vom Schem Hamphoras und vom Geschlecht Christi, he affirmed that the Blessed Virgin Mary was “saved and purified from original sin through the Holy Spirit” (2004 translation by historian Beth Kreitzer). But he stated this without reference to when it occurred. We may plausibly infer that he continued to believe that it was at Christ’s conception (given his 1540 statement).

The most fascinating aspect of all this, in my opinion, is that St. Thomas Aquinas had expressed something very similar, almost three centuries earlier:

“The second purification effected in her by the Holy Ghost was by means of the conception of Christ which was the operation of the Holy Ghost. And in respect of this, it may be said that He purified her entirely from the fomes [i.e., the stain of sin].” (Summa Theologica, Third Part, Q. 27: “The Sanctification of the Blessed Virgin,” Article 3: “Whether the Blessed Virgin was cleansed from the infection of the fomes?”)

Luther was actually following a strain of Catholic scholastic thought that the Church at length deemed erroneous. Yes; even St. Thomas Aquinas could occasionally be mistaken!

Can it be said, then, in summary, that Luther was “opposed” to the Catholic dogma of the Immaculate Conception, fully defined at the highest level of dogmatic certainty, in 1854, by Blessed Pope Pius IX?

Well, yes and no. If we mean the dogma as it is believed by the Catholic Church, and the timing of God’s special act of grace (at Mary’s own conception), he eventually denied that aspect of it, but if we mean “removal of original sin,” which is the essence and heart of the doctrine, then he did not deny it.

The common ground in his views is God’s removal of original sin from Mary by a special act of grace, and he seems to think that she was free of all actual sin, too, after Christ’s conception. These two things, as far as they go, are very “Catholic” indeed!

In light of a consideration of all the relevant evidence, I think it’s accurate to refer to Luther’s fully developed position as [Mary’s] Immaculate Purification. It’s not identical to the Catholic position (which wasn’t yet a Catholic dogma during his lifetime), but it is far more similar to it than to any denominational Protestant position today, including that of Lutheranism.