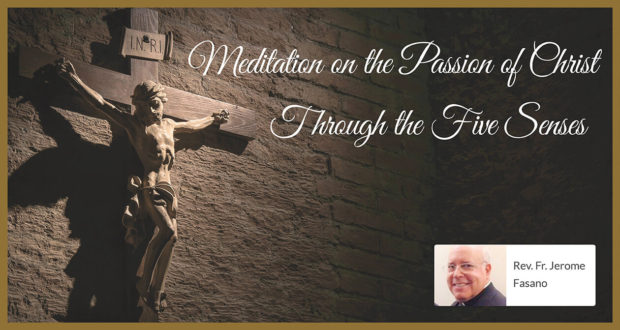 Meditation on the Passion of Christ Through the Five Senses

Father Fasano helps us ponder how Jesus suffered in each of His senses in order to more fully appreciate how much He endured for the love of each one of us.

Over the course of Catholic history, many a saint has recommended meditation on the Passion of Our Lord as an excellent way of making progress in one’s life of prayer.

Thus, permit me to submit for your prayerful consideration a brief meditation on the Fifth Sorrowful Mystery of the Rosary…the Crucifixion.

Imagine Our Lord arriving at the Hill of Calvary, having already been cruelly beaten and crowned with thorns. Now He is brought to His execution by crucifixion, a heartless form of punishment reserved for the worst of offenders, though not for citizens of Rome.

That is why St. Paul, a Roman citizen, was beheaded, whereas St. Peter, not a citizen of Rome, was crucified.

Part of the punishment by crucifixion, beyond the physical pain to be endured, was humiliation of the victim, by having him stripped naked before the crowd.

One can well imagine how the exalted modesty of Our Lord was so deeply offended by this abuse, which must have caused immense pain to Our Lady, and the pious women as well, who had accompanied Her to Calvary to witness the death of the Savior of the world!

Once Jesus had been stripped of all His garments, He lay down on the wood of the Cross to receive the piercing spikes of the nails in His hands and feet, which not long before had been bathed with costly ointment and kissed by the penitent woman. His arms were likely tied to the Cross with coarse ropes, which caused further pain by their abrasions, once the wooden Cross was hoisted in place.

Now, the Savior’s agony becomes even more intense as He suffers in each of His five senses, in reparation for so many of our sins which are often caused by the inordinate pleasure we derive from our abuse of the senses, which are in themselves, gifts from God, i.e. sight, taste, touch, hearing and smell.

We should ponder how Jesus suffered in each of these senses in order to more fully appreciate how much He endured for the love of each one of us.

Feel the Pain of All Five Senses

First, He is pained through sight, especially in having to see His Sorrowful Mother sharing His agony as She weeps bitterly at the foot of His Cross. If only He could spare Her, but knowing He is the “New Adam,” He needed Her to be the “New Eve” if They were to usher in a new creation.

Though Our Lady was spared labor pain in giving birth to Jesus in Bethlehem (by virtue of Her Immaculate Conception), She now suffers such pain as She labors on Calvary to give birth to the Mystical Body of Christ, the Church. Our Lord is also pained to see only the Apostle Saint John at Mary’s side.

Where are the rest of His apostles who had heard every Word He had spoken and witnessed His every miracle? He suffers at the sight of so many indifferent souls, like the soldiers throwing dice for His garments.

Jesus most notably suffers in His sense of touch, first from the merciless scourging He had received earlier, the torturous journey carrying His cross to Calvary, the crown of thorns digging deeper into His brow, and now, the iron spikes that hold Him to His cross.

Jesus’s sense of hearing also brought Him much pain, as He had to listen to the jeers and blasphemies of the hostile crowd. One of the thieves next to Him taunted and mocked Him. He also had to endure the sound of weeping from His Mournful Mother, Mary, and the devastated disciples near Her.

Even the sense of taste caused Jesus suffering when His agonizing thirst was quenched by sour wine. He cried out, Sitio, “I thirst!” but not primarily for drink but for souls, your soul and mine. Will we surrender to His cry and console Him by our faithfulness?

Then there remains the sense of smell. Christ had been crucified on Golgotha, “the place of the skull,” where rotting human flesh caused such an unbearable stench which must have been nauseating, coupled with the odor of the unwashed and sweating mass of people all around Him.

We Mortify in Solidarity With Christ

The next time we are tempted to sin, especially in the improper use of one of our five senses, we need to call to mind the sufferings of Jesus in each of His senses. Then perhaps, with the Crucified Christ before our mind’s eye, we will have the motivation and strength to resist temptation and defer any sensible gratification until our human body with all of its senses is glorified in Heaven, when for all eternity God will reward each sense with pleasure and delight beyond our imagination!

Therefore, all Christians are called to mortify their senses of sight, taste, touch, hearing and smell. This is not restricted only to avoiding sinful pleasure, but we ought to make certain we do not go to excess in the enjoyment of even lawful things.

We regulate the use of radio or other music (except maybe for sacred music), listening to gossip, or off-colored jokes, in order to mortify the sense of hearing. We can mortify the sense of touch by avoiding the most comfortable chair in the room, or by enduring the heat or cold without seeking relief.

Finally, even the sense of smell can be mortified by putting up with unpleasant odors as we clean the house, or by sacrificing the use of perfume, cologne or after-shave lotion, using instead a good deodorant soap and scentless witch hazel. Certainly, none of us wants to be the cause of others having to mortify their sense of smell in our presence!

It’s surprising how dependent we have become on seeking even legitimate pleasure through our five senses. Many who have suffered from COVID-19 lament that their temporary loss of the sense of smell and taste was very trying for them. Hopefully, this temporary deprivation caused them to appreciate more fully the gift of having these senses.

When we realize how many of our brothers and sisters are deprived of their use of sight through blindness, or hearing through deafness, or touch through paralysis, we ought to be reminded not to take our senses for granted, or needlessly to manipulate them through use of illicit drugs or excessive use of alcohol.

When we ponder the Crucifixion of Our Lord, we are meditating on the greatest “love letter” ever written! We should never tire of reading it.

It is not written in ink, but in blood, the Precious Blood of Christ. It uses not words, but wounds, as each of Jesus’s five wounds speaks, “I love you!” Each lash mark on His Sacred Body is an exclamation point!

We should never grow tired of reading the simple proclamation of God’s love for us as we find it in the Gospel of St. John (3:16)… “God so loved the world that He gave His only Begotten Son that whosoever believes in Him should not perish but have eternal life!”