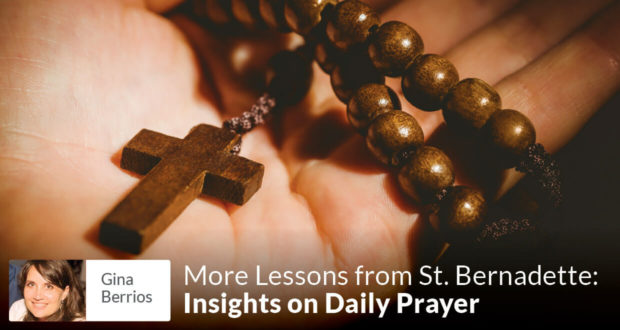 We are blessed to have an extensive recorded history of the simple and humble St. Bernadette of Lourdes.

Most of it is from those who knew her well or those who interviewed her about the miracles at Lourdes. We even have transcripts from those who were skeptical of the events at the grotto, including the police and government officials. But we also have her own words, recorded in the form of her journals, prayer books and notes from her retreats. These personal reflections and notes offer us profound yet simple lessons in the devout life.

“Who could unfold [asks a Religious] what the visions at the grotto had already done by way of supernatural lights implanted in this frank and simple soul? What deep wells of contemplation for her in the ineffable remembrance of half-opened Heaven? Since February 18th Bernadette had heard Mary. She did not remember every utterance, but the substance and the whole effect remained in her memory and above all in her heart.” (p. 182)

St. Bernadette’s prayer life was no doubt enriched by the meetings with Our Lady and the memories of which were burned in her soul, however her daily prayer routine was nothing out of the ordinary. She utilized the spiritual treasures of the Sacraments and prayers offered to all the Church, and she encouraged those around her to embrace a devout practice of carrying out each of their duties as Catholics.

In a letter offering advice to her 15-year-old brother Jean-Marie she wrote, “Above all, I urge you not to neglect your religious duties. Do not forget that where there’s a will there’s a way.” (p. 264)

She was questioned by a priest about the visions who asked,

“Didn’t the Blessed Virgin tell you what you had to do to get to Heaven?” [She replied] “No, Monsieur l’Abbe. We already know that very well; there was no need.” (p. 211)

I would like to present reflections from St. Bernadette on the spiritual life. Keeping in mind how young this saint was, I especially encourage you to offer these reflections to the young people in your life.

A daily prayer life is not something for an older generation; it should be encouraged and fostered in our young people. Let us learn from St. Bernadette.

I don’t think anyone is surprised to hear that Her Superior General said that the rosary was Bernadette’s favorite prayer.

A recollection of her childhood friend, Julie Garros was, “She used to wear a small apron and always kept her hand in the pocket. I asked her what she had in this pocket…sweets or other things? She told me that it was her rosary.

‘But why hide it like that? [She replied] ‘It’s sometimes good to hide one’s devotions from people’s eyes: they might be misunderstood and cause the Blessed Virgin to be spoken ill of.’” (p. 195)

Bernadette advised a friend, “At night when you retire to rest, take your beads and go off to sleep while saying them; do the same as little children who fall asleep saying: ‘Mamma, Mamma…’” (p. 344-345).

St. Bernadette gave this advice to a novice, Sr. Vincent,

“When you pass by the chapel and haven’t time to stop, tell your Guardian Angel to take your messages to Our Lord in the Tabernacle. He will take them and then have time to catch up with you.” (p. 345).

St. Bernadette’s favorite books were The Imitation of Christ and the New Testament. She also preferred to read books about the Eucharist and the Passion of Our Lord.

As her biographer, Abbe Trochu recalls,

“The main subjects of her contemplation and devotion were the sufferings of Our Lord, the Eucharist and the Blessed Virgin. She knew the four Gospel accounts of the Passion almost by heart. She made them her most regular study, reading them preferably without commentaries, just as they are in the holy Gospel.” (p. 268)

Lives of the Saints

St. Bernadette was deeply devoted to St. Joseph, especially as the patron of a happy death. She also had a great affinity to St. Francis of Assisi, and her namesake St. Bernard who loved Our Lady.

During her life in the convent, Bernadette read extensively about the lives of the saints. She commented that she would have liked to have read more about the imperfection of the saints.

“I think that they ought to point out the faults the Saints had, and indicate the means they employed to correct them. That would be helpful to us. We would learn how to set about it. But all that is mentioned is their revelations or the wonders they performed. That cannot serve our advancement.”

“She failed to add that even so these imperfect authors are to be commended for praising the pre-eminent qualities of the Saints, and that she found in them examples to imitate. The Church in its infallible decisions was one day to adopt the well-founded verdict of a Superior General of Saint-Gildard; ‘It is my own opinion that during her life Sister Marie-Bernard put into practice the virtues that constitute sanctity.’” (p. 346)

The Stations of the Cross

St. Bernadette made the Stations of the Cross daily, either in the chapel, or in the infirmary when she was bedridden with illness.

Her advice to a novice sister who complained of difficulties meditating was,

“Take yourself off to the Garden of Olives or the foot of the Cross and stay there. Our Lord will speak to you; and you listen to Him.”

St. Bernadette recorded in her notebook,

“O Jesus, keep me under the standard of your Cross… Let the crucifix be not merely before my eyes and on my breast, but in my heart, alive within me! Let me be crucified alive like Him, transformed into Him by the union of the Eucharist, by meditation on His life, on the inmost feelings of His Heart, drawing souls not to myself but to Him, from this high Cross to which His love fastens me alive forever!” (p. 341-342)

Mother Cassagnes said, “She drew from it ‘the strength to endure in peace of soul her indescribable sufferings.’ (p. 342)

When a sister mentioned difficulty in correcting her own faults, Bernadette replied, “How can one receive the Bread of the Strong and not be more courageous?” (p. 342)

When praying in thanksgiving after communion, Bernadette reflected,

“I think to myself that the Blessed Virgin is giving me the Infant Jesus, I welcome Him, I speak to Him and He speaks to me….You must give to God a good reception. We have every interest in welcoming Him for then He has to pay us for His lodging.” (p. 342)

A fellow Sister received this advice from the future saint regarding their vocation as a Sister of Charity:

“’If you are sent to a hospital, remember to see Our Lord in the person of the poor man; and the more disgusting the poor person is, the more is he to be loved.’ One day when she was sending Sister Garros to take the blind Sister with cancer for a walk, she said once again to her compatriot: ‘Take care of her as if she were God Himself.’” (p. 302)

In 1874, she wrote this in her prayer notebook:

“But I am so tired out in the morning! Remember the temptations of Father Avila, hesitation one day on account of his fatigue to continue on his way to say Mass. Our Lord appeared to him and pointed to His Heart, reminding him that exhaustion did not prevent Him from going on to the summit of Calvary. Courage! I too must learn to force myself. Even if I am tired, even if exhausted, at the end I can find rest on the Heart of Jesus.” (p. 339)

When asked by two postulants about the grotto, Bernadette asked, “’What do you do with a broom?’…‘Well, that’s a fine question! You use it for sweeping.’ ‘And afterwards’ ‘You put it back in its place behind the door.’ ‘And that’s my history. The Blessed Virgin used me and then put me back in my place. I’m glad of it, and there I stay.’” (p. 326)

Written of her during her novitiate: “She is very much as repute portrayed her to us, humble in her supernatural triumph, simple and unassuming, even though everything so far has conspired to exalt her and advertise her; always smiling and delightfully happy, although a continuous debility has for a long time been undermining her frail and delicate constitution. That is indeed the hallmark of sanctity: constant suffering side by side with heavenly joys.” (p 258)

Written very deliberately in her prayer notebook was this reflection: “I will do everything for Heaven…There I shall find my Mother in all the splendor of her glory.” (p.372)

The Humility of a Saint
Regarding her sainthood, a Superior General of Saint-Gildard remarked “I think I ought to say that the Lourdes Apparitions would not alone justify her reputation for sanctity.’” (p. 306)

Abbe Trochu notes “after the apparitions, “undoubtedly her name, coupled with that of Our Lady of Lourdes, was to be carried to the very ends of the earth; yet even then she would only be the little star that vanishes in the blaze of the sun…The continuous ‘procession’ of pilgrimages, the unending Aves of the grotto, those holy innovations born of her testimony, no longer needed her presence.” (p. 174)

Found in her own handwriting was this prayer in her notebook:

Have pity on your little servant,
Who despite all would like to become one of your greatest lovers.
In following you alone
I will make my happiness consist;
In living with you alone, alone and forgotten,
That so I may be able to love you all the more.

St. Bernadette, pray for us!