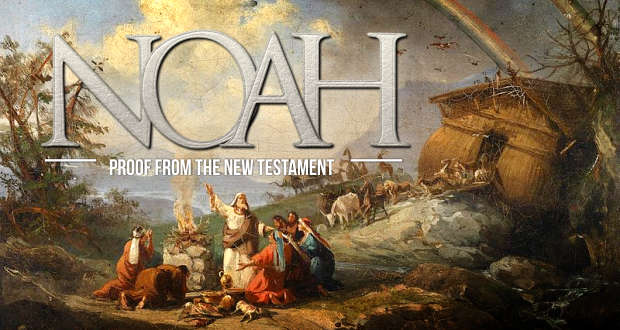 The film Noah has made quite a splash. I have not yet seen it, as of this writing. I’m particularly interested in judging how true to the Bible it is. Most Catholic reviewers have given mixed reviews in that regard and also in the artistic sense, with various degrees of approval or disapproval.

Often, Christians act as if the Old Testament is antiquated and of no relevance to Christianity – or in extreme cases to history – at all. Neither opinion is true. Explaining why would require two long separate articles; but setting those issues aside, we can still demonstrate how the New Testament regards particulars in the Old Testament. I thought it would be fun, informative, and helpful for homeschoolers to apply that “technique” to the question of the historical existence of Noah.

On the Coming Home Network discussion forum where I used to moderate, one of the members related a horror story about a person who was leading a Bible study, who taught that Abraham was “the first character in the Bible that we [Catholics] believe actually existed” and that “Adam, Eve, Cain, Abel, Noah, etc. may simply have been literary devices.”

This is not Catholic teaching. If Adam and Eve are not regarded as actual human beings, and the parents of the human race, then the doctrine of the Fall of Man and original sin collapses, and we are not in need of being rescued from a fallen, sinful condition.

Referenced in the New Testament

Noah is included in this same recitation of heroic faith, in Hebrews 11. Note how Abraham is mentioned in the next verse. There is no indication whatsoever that one was a real person and the other a mythical figure only:

Hebrews 11:7-8 (RSV) By faith Noah, being warned by God concerning events as yet unseen, took heed and constructed an ark for the saving of his household; by this he condemned the world and became an heir of the righteousness which comes by faith. By faith Abraham obeyed when he was called to go out to a place which he was to receive as an inheritance; and he went out, not knowing where he was to go.

St. Peter believed that Noah was a real person too (“God’s patience waited in the days of Noah”):

Again, the text moves from the fallen angels to Noah, and then to Lot (2:7), who lived in the time of Abraham, and was his nephew, to the time he was writing. St. Peter is arguing by analogy, stating, in effect: “God rescued Noah and Lot; He can and will do the same for you today.”

This makes absolutely no sense if the earlier people are imaginary, because the text would cite the real fallen angels (demons), then move to the supposedly imaginary Noah, then back to historical reality with Lot and the early Christians. This utterly violates the tenor and nature of the passage, as is the case in similar passages noted above.

I would urge anyone to stop attending a study “led” by a person this uninformed. “Blind guides” lead others astray. It is for very good reason that St. James warns:

James 3:1 Let not many of you become teachers, my brethren, for you know that we who teach shall be judged with greater strictness.