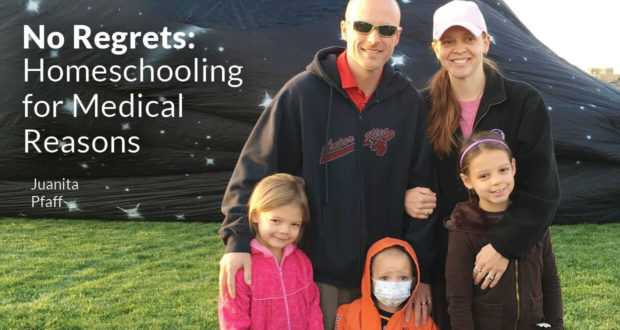 No Regrets: Homeschooling for Medical Reasons

The Pfaff’s weren’t ready for their son’s medical diagnosis but are grateful that God gave them a path that led to homeschooling and they have no regrets.

We were preparing to send our oldest daughter to kindergarten at the school just over the hill from our house, but days before school started, we were at a doctor’s appointment for our son, Jude, who had been through quite an ordeal due to the complications of his blood disorder, severe chronic neutropenia.

We asked the pediatrician his thoughts about sending our daughter to school and how it might affect Jude, since the neutropenia makes him severely immunocompromised and any germs that Ashlee might bring home from school would be a danger to Jude. He jokingly said, “Kindergarten is overrated!” 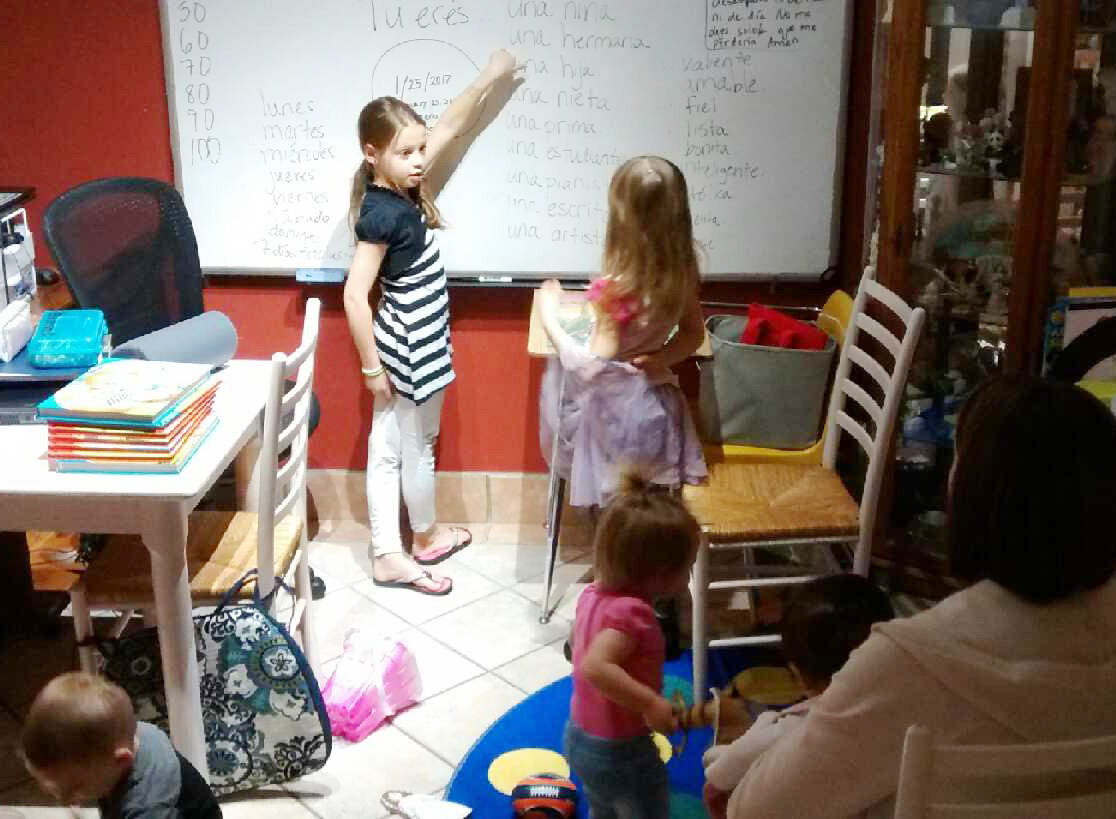 We laughed and greatly appreciated him being able to make light of the situation, but then he reiterated that it would put Jude at much higher risk of dangerous illness if we sent the girls to school.

Homeschooling had always been a possibility in the back of my mind. I worked from home and was already staying home with the children, but I wasn’t sure I could handle educating them. Catholic school wasn’t an option for us financially and we actually live within walking distance of the top elementary school in the city.

However, because of his neutropenia, Jude does not have enough of the white blood cells called neutrophils that the body uses to fight bacteria. 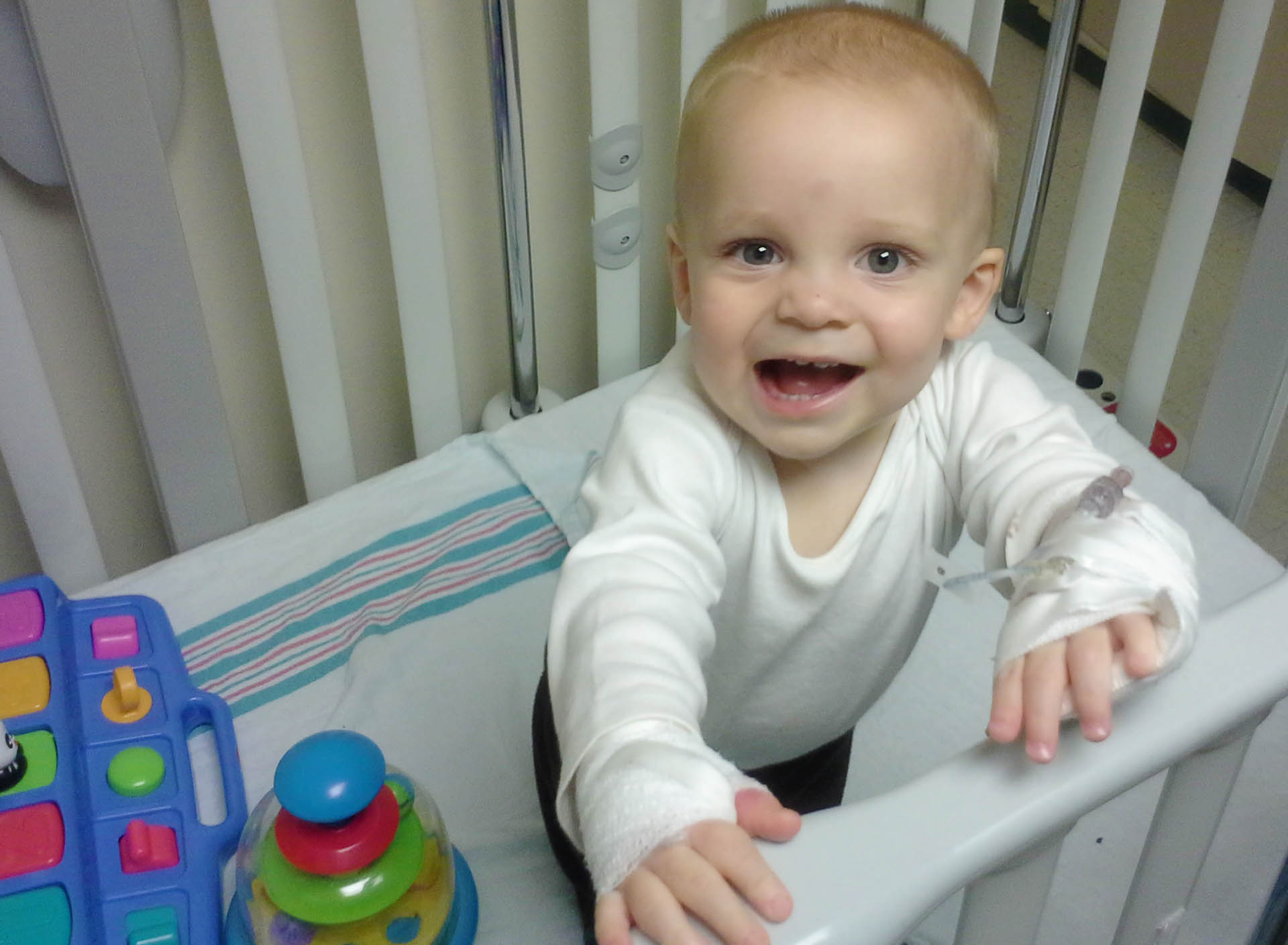 So even if he had a common cold caused by a virus, if it turned into an ear infection or if the fever lingered too long, or if even a scratch got infected, he ended up in the ICU on IV antibiotics and had to receive extensive medical care.

During the first few months after Jude’s diagnosis, we were in the hospital with him about every 3-4 weeks and most often it was because he got a cold from his sisters.

Being in the hospital with a child is hard enough, but then to manage two other children outside the hospital is an added challenge. Homeschooling was, and still is, an incredible blessing for us, especially in this unique situation.

If we were in the public-school system, figuring out who would take the kids to school, pick them up, and be home with them in the evening would have been much more difficult and taxing on us and on those who helped us make it through these difficult times.

Being a homeschooling family allowed us to put school on hold during those times we were in the hospital and our son and our daughters were at grandma’s house. The girls were able to enjoy time with their grandparents without worrying about their brother because they were surrounded by family. 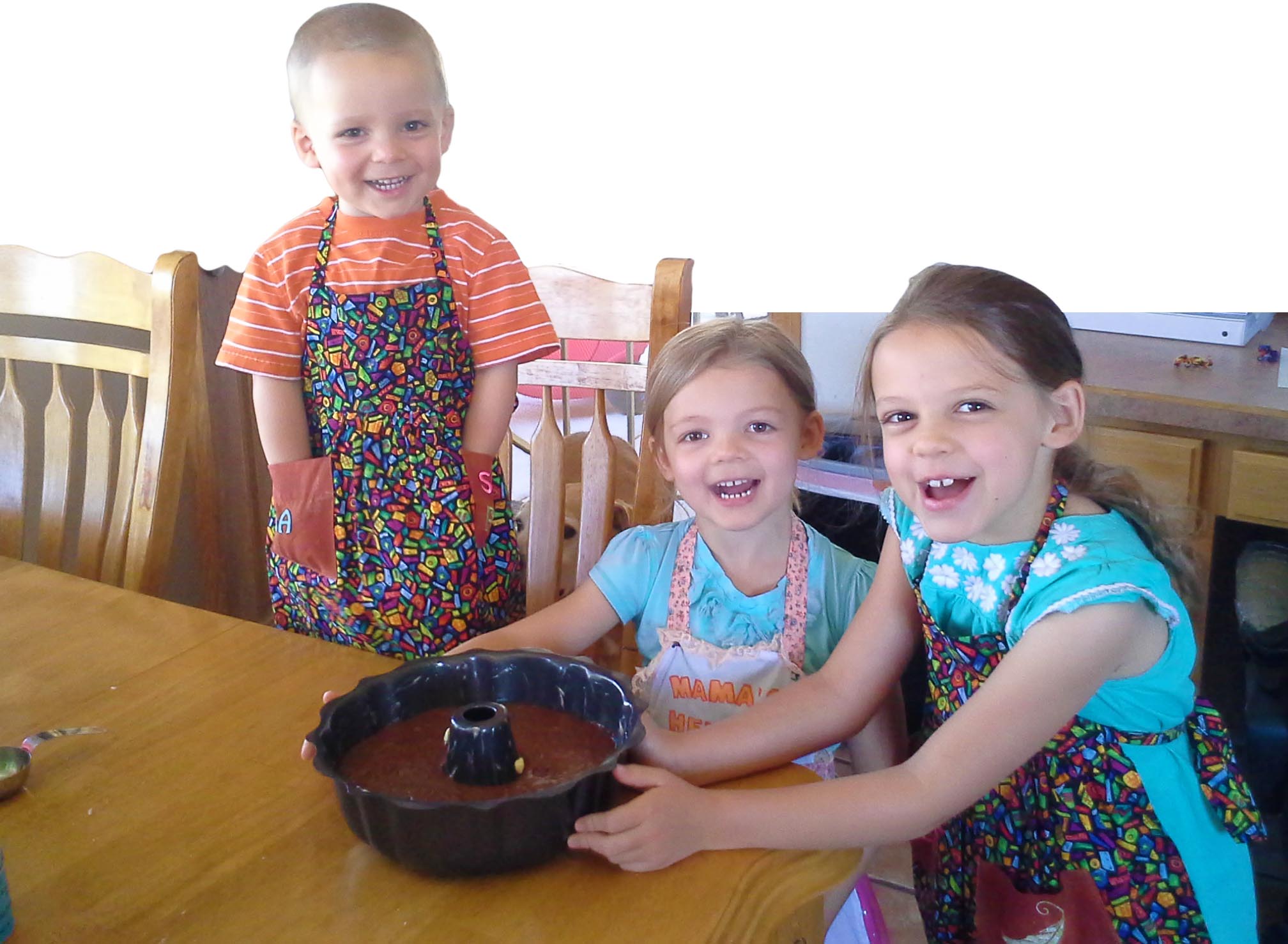 I didn’t have to worry about school because I knew we could adjust and pick up where we left off when we got home.

But in dealing with a serious medical issue for our child, I think the best part was that since we were keeping the older girls home, we were able to protect our son from illness as much as possible.

Working within the Bubble

As time went on, we learned how to manage Jude’s neutropenia with simple measures that really went a long way, like hydration and washing hands constantly, but we have to take some extreme precautions to protect him, as well. It feels like living in a bubble sometimes.

We make infrequent, short outings when necessary or if we are getting cabin fever, but even then, Jude wears gloves and a mask in public and his sisters gladly join him with a mask so that he doesn’t feel alone. 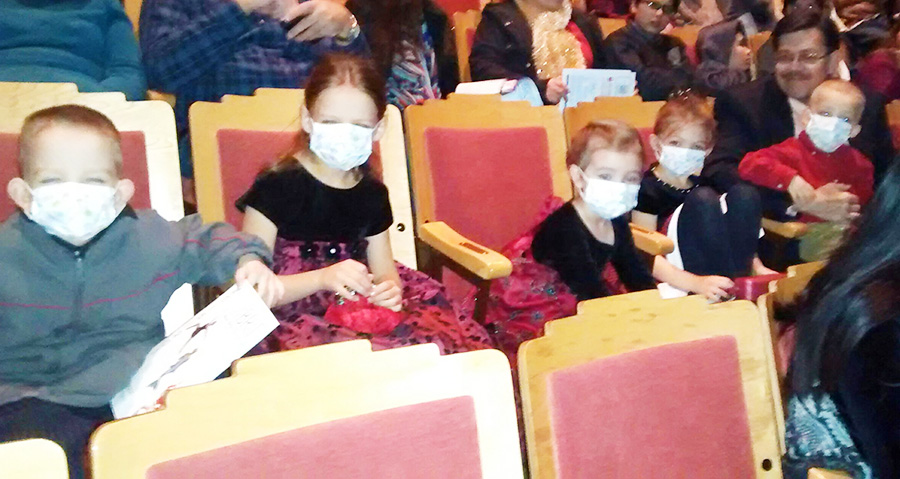 We are learning how to do field trips in the safest way possible and we recently even went to the pumpkin patch wearing gloves and masks. We focus on recreating at home instead of afield, having purchased a swing set for the backyard and cleared out lots of room to play.

Occasionally, we even have to watch Sunday Mass on TV because in the height of flu season, it is safest for us not to be surrounded by large crowds in an enclosed space. Thanks be to God, it has been three years since Jude’s diagnosis and he is now 4 years old.

Though we chose homeschooling for medical reasons, we have been so blessed by it academically because both girls have been able to move at their own pace and we can always adjust as needed.

We chose Seton upon recommendation of other homeschoolers in our parish and also because of the support we received when we first called for information.

As we have worked through the books together, I realize that, above all, the influence of the faith on every page in every book for every subject has been astounding. Anyone with a gravely ill child knows how those circumstances can really test your faith. 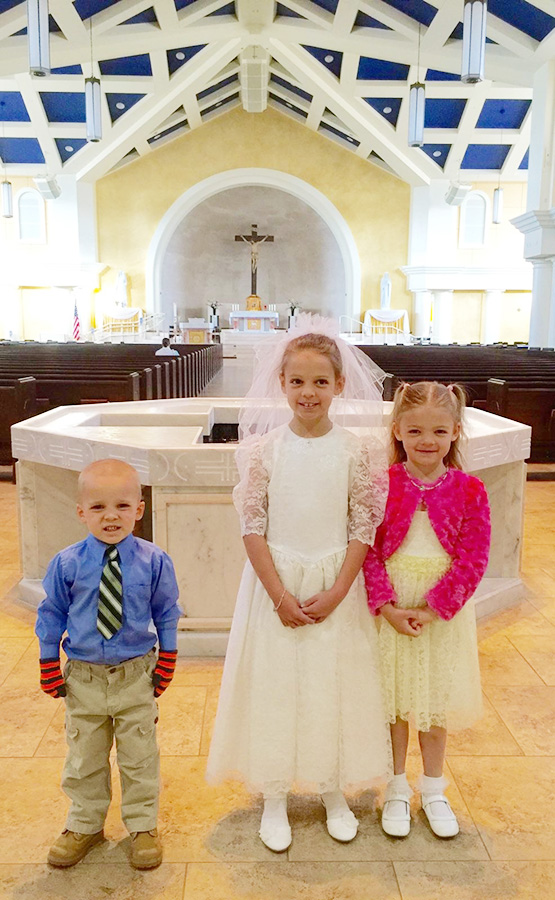 As a mother, I need help every day to trust God and to give my worries and struggles to him. As we begin our day with prayer, we give our family to God. Ashlee and Isa pray for their brother daily, to be healthy and strong.

Just having this time together is such a blessing to me because I have faced the stark reality that our children are only lent to us for a time, and we never know how short that time may actually be.

Too many times, I wasn’t sure if Jude would make it through an illness because his little body was so sick and weak and limp. But at those times, I was able to lie in the hospital bed with him and hold him and be completely present to him, in large part because I was not worrying about juggling our other children’s schedules.

We have learned to keep life as simple as possible, especially in regards to our time at home together. Before Jude was diagnosed, we were always on the go – visiting friends, going to museums, parks, zoos, restaurants, and other outings. 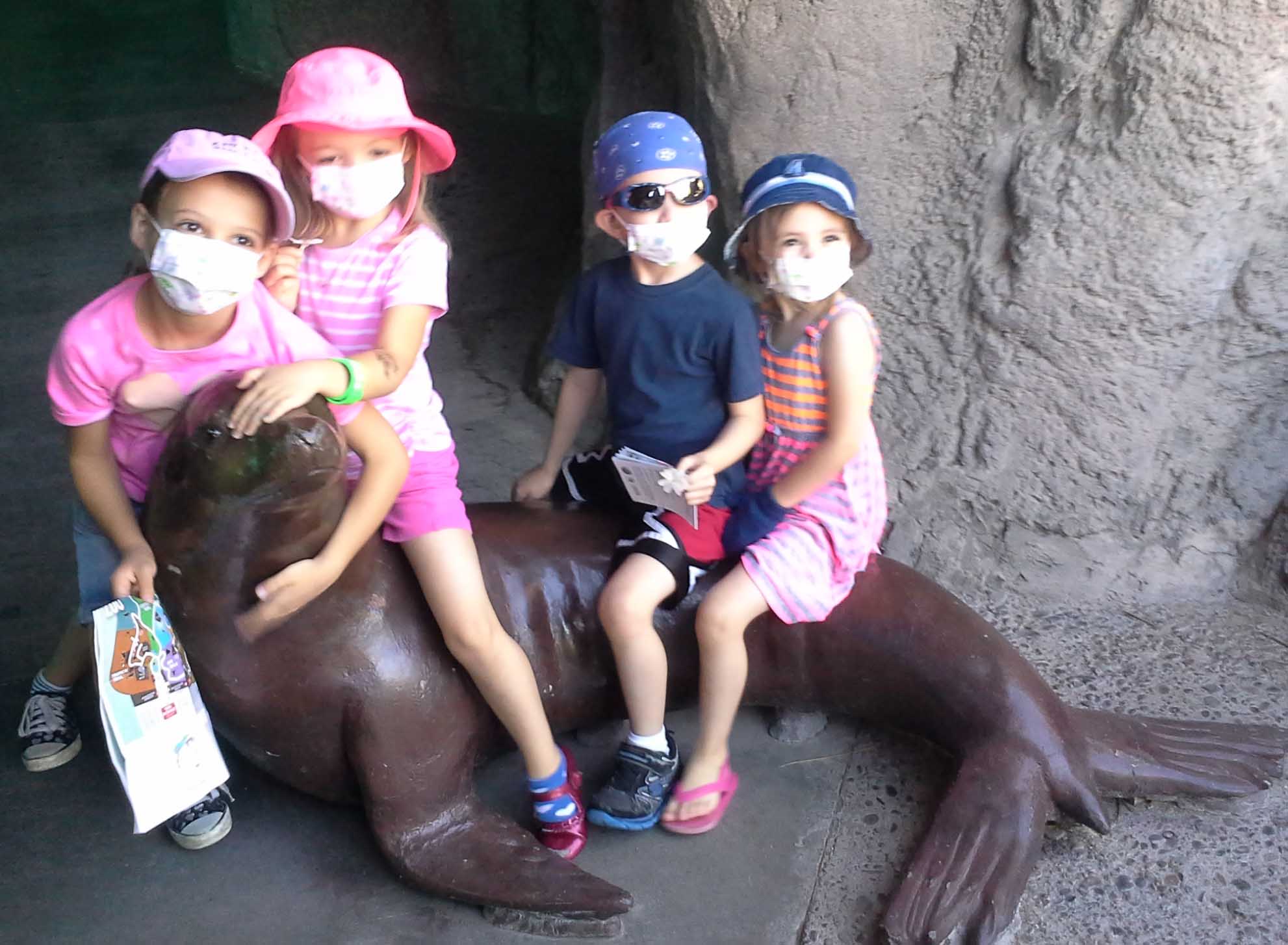 It was fun, but this – slowing down, being home, and learning to enjoy and help each other – this is lasting and real. These are the memories I hold dear, while I don’t really remember all those outings before.

I wasn’t ready for my son’s diagnosis, for homeschooling, for the hospital stays and office visits, but I’m so grateful that God brought us down a path that led to homeschooling and I have no regrets.