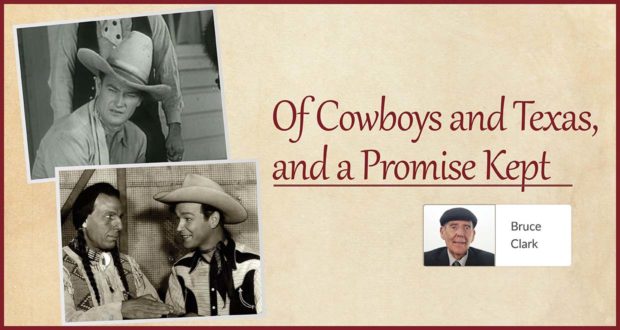 Of Cowboys and Texas, and a Promise Kept

Bruce Clark never forgot how his spirit was lifted by cowboy legends during dark and trying times of his youth and a promise he made to give something back.

As I write historical novels, I often have been fascinated by various authors’ reasons behind writing a novel about that particular time in history. Many of my readers have the same curiosity. So for all you curious readers, here is the genesis of my historical adventure novel The Blood-Red Flag.

In the foreword of his novel Texas, James A. Michener, for many years the dean of American storytellers, observed that there have been more books written about Texas than all of the other states combined. He added that books about Texas outnumber those about California by a whopping margin of six to one. A fair question is Why? Fair answers are “glamour” and “mystery.’

I was celebrating my sixth birthday the day Japanese planes bombed Pearl Harbor. For the next forty-four months, Americans lived under black war clouds. Fathers, brothers, uncles, and neighbors went off to fight the war in regions which, before December 7th, were nothing but obscure places with strange names on world maps.

Kids of that World War II-era were drawn into the conflict in very personal ways, mainly because of relatives serving overseas, and because of the nightly war news on the radio, which at the war’s beginning was pretty grim. We all became familiar with Ration Books, which we needed to buy scarce foods and goods. We became familiar with Victory Stamps, which students across America purchased every Friday at their schools for a dime or a quarter. American families started and maintained their own Victory Gardens. Children helped gather newspapers and old tin cans in “scrap drives to help the war effort.”

We young ones were submerged in the war drama for six days each week, Monday through Friday in schools, and in church on Sundays, praying for our soldiers and for victory. But every Saturday, we could “escape” the war.

Saturday morning movies, double features, were a way of life for youngsters who grew up during the war years. Admission was a dime, and, for a quarter, if you had a quarter, you could buy enough stale popcorn to guarantee a three-day bellyache.

Movie cowboy stars, such as Roy Rogers, Gene Autry, Hopalong Cassidy, and John Wayne, were bigger than life in those days for all of us rootin’, tootin’, cap-gun shootin’, ring-tailed buckaroo saddle pals. Each week, a sagebrush hero galloped across the silver screen, providing us with an afternoon of guileless glitter and gleam, as well as the determination to be straight-shooting, clean-living winners just like them.

The fact that the big four, Rogers, Autry, Wayne, and Cassidy, were born in Ohio, Oklahoma, Iowa, and New York City, really didn’t matter. They convinced us that the heroes who wore white hats always won. We sat glued to our theater seats, sometimes by discarded chewing gum, but mostly by visions of the Lone Star state’s vast prairies in deepening twilight.

As the blue-black velvet of darkness descended on cowboys’ chuckwagons, a glow of flickering flames gave evidence of saddle-weary cowboys shivering in the cold and moving as close to the dying embers of their branding fires as they dared. Living legends, those young cowboys were lulled to sleep by their lowing cattle, too tired to stir as a lonely coyote’s mournful howl rang across the stillness in a magical world of mesquite, tumbleweed, and adventure called Texas. These cowboys provided the glamour and mystery that young people yearned for, especially during the difficult years of the Second
World War.

I learned to love the glamour and mystery of the Old West on those long-ago Saturday afternoons, and for a few hours, I forgot the war. One special Saturday, I made a promise to give something back to those American heroes. My novel, The Blood-Red Flag, is my fulfillment of that promise.

Hopefully, this tale of heroes Bowie, Austin, Travis, Crockett, and Houston will convince young readers to learn more about American history, and inspire them to give something back to our country. Knowledge of America’s past and our heroes not only teaches us about our great history, but it also makes us more optimistic about America’s future.