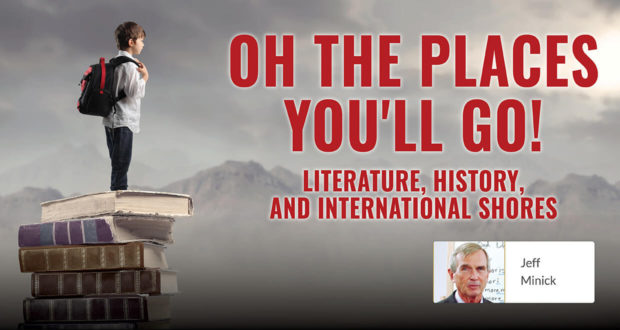 We become more fully human when we learn more about the literature of another country and enter into the minds and hearts of its people through its stories.

Many high school students, including those enrolled with Seton, take some sort of world history course.

Such a global survey of people, places, and events is necessarily broad and superficial.

But this study of other countries helps students deepen their understanding of such events as the French Revolution, the vast changes brought by Peter the Great to Russia, the colonization of Australia, and the rise and fall of different dynasties in China.

Typically, this foray into the past is followed by an American history course. Seton wisely includes the study of the American government during the senior year.

But suppose you want to dig deeper into the story of one particular country? Suppose you become entranced by India or Japan, Russia or Italy, and want to learn more about those faraway lands?

While Seton is an English-centric curriculum, we encourage students in our international community to explore the great literature of their country as well. As an extra benefit students have the opportunity to read the works in their native language.

You can, of course, explore the history of such nations online or through books, reading about the heroes and villains of that distant place, its contributions to world civilization, and the struggles its people have endured.

You can also look to literature for insights into that past.

I chose to teach that final course for several reasons. My academic background was in medieval English history. The United States has stronger connections with Britain than with any other nation, and I wanted students to learn about a country and a culture other than their own. Moreover, English literature offers some of humankind’s finest writing ever produced.

The students benefited from these dual courses. Not only did they receive credit for both history and literature, which of course meant more work for them, but they were able to make connections between the events of Britain’s past and their relationship to the poetry, plays, and stories produced during different historical epochs.

In my course on British history and literature, we used DK Publishing’s History of Britain and Ireland as our guide to the past. The 1991 version of Prentice-Hall Literature: The English Tradition was inexpensive and readily available online, a thick textbook abounding with historical sketches, poetry, plays ranging from Shakespeare’s Macbeth to Shaw’s Pygmalion, and short stories and essays by the truckload.

In addition to selections from this text, students read other literary works, classics like Everyman, Sir Gawain and the Green Knight, and Kipling’s The Man Who Would Be King. Also, more contemporary stories like Geoffrey Household’s Rogue Male, Dodie Smith’s I Capture the Castle, and P.G. Wodehouse’s Right Ho, Jeeves. I selected these books for their variety, their portrayal of England at different times in history, and in hopes that they might appeal to the students.

We read poetry and scenes from plays aloud in the classroom, and in a move that some might regard as cruel, I required students to memorize the first 18 lines of the “Prologue” to Chaucer’s Canterbury Tales in its original Middle English. Besides writing numerous papers, students engaged in all sorts of classroom exercises, discussing, for instance, Kipling’s story in relation to our own country’s policies in Afghanistan or laughing as have millions of other readers at the foolhardy hijinks of Bertie Wooster in Right Ho, Jeeves.

In short, we stepped out of our native land, crossed the Atlantic, and dove into another culture.

You can use this same technique of using literature to dig into the culture and history of a land and apply it to most countries around the globe.

For example, mature students wishing to know more about Norway can learn about the Vikings by reading Norse myths or about medieval Norway by diving into Sigrid Undset’s Nobel Prize winner, Kristin Lavransdatter, a trilogy set in the 14th century.

Victor Hugo’s massive novel, Les Miserables, is filled with, among other things, French history, philosophy, and the manners and customs of the 19th century.

Those wishing to learn more about Russia, its Revolution, and its dreary aftermath might take up Boris Pasternak’s Doctor Zhivago or Aleksandr Solzhenitsyn’s One Day in the Life of Ivan Denisovich.

An exploration online or in the local public library should turn up literary treasures from other countries—India, China, Egypt, and more—that will give readers a sense of what life was like in the past.

When we read such literature, we do more than learn about the past or the character and culture of the people who inhabited a particular era. In the best of the world’s literature, these international journeys through books should also make us more aware of the similarities among human beings, their joys, and sorrows, triumphs and defeats. The cultural differences between a banker in China and her counterpart in Mexico exist, but these in no way erase the bonds of their common humanity.

“To become more fully human” is a phrase frequently employed by Catholic writers and religious. When we learn more about the culture of another country, when we enter into the minds and hearts of its people through its stories, we are ourselves becoming more fully human.