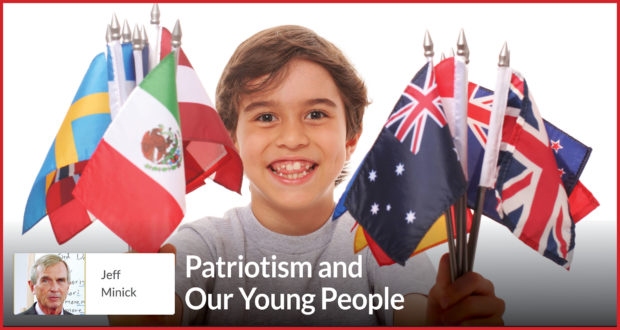 Patriotism and Our Young People

Jeff Minick explains the necessity of educating young people about our patriotic heroes and how, through reading, this can be achieved.

Breathes there the man, with soul so dead,
Who never to himself hath said,
This is my own, my native land!
So begins Canto VI of Sir Walter Scott’s “Lay of the Last Minstrel.”

And all around the world, hundreds of millions of people feel this same way about their country. Aleksandr Solzhenitsyn, for example, was repulsed by the communist government of the Soviet Union but loved Mother Russia until his dying day.

Chinese men and women who protest their ruler’s dictates do so for the love of China and its people. The Ukrainians fighting and dying to resist the invaders of their country do so not because they necessarily support their leaders but because their homeland is under attack.

We can feel loyalty and love for what novelist William Faulkner called “my own little postage stamp of earth.”

We can also be good citizens by voting, obeying the just laws of our nation, and respecting the rights of those around us. In short, we can feel deep affection for our country, no matter where we live, without applauding our government.

Love of Country and the Seton Curriculum

Seton Home Study School blends that patriotism and citizenship into its textbooks and lessons. In the fourth grade, for example, students read This Is Our Land, which includes stories about American pioneers and nation-builders as well as tales from Switzerland, England, and Holland, among other countries.

Seton’s fifth-grade reader, These Are Our People, exposes students to children from many different backgrounds. The brief introduction to the last story sums up America this way: “Our country is a land of many people from many places; but for all of them there shines Sunlight on the Cross.”

And then there are the other books from Seton, which are not a part of the curriculum, that boost our knowledge of the past.

I was a kid when I first encountered the Childhood of Famous Americans series.

At that time, these books came in hardcover, bound in orange or blue, and each volume followed the same pattern: a retelling of the early lives of American heroes, entrepreneurs, scientists, soldiers, and more, followed by the last chapter detailing that person’s accomplishments as an adult.

There were scores of these biographies, ranging from those who remain well-known today—Lincoln, Abigail Adams, Mark Twain—to figures now little remarked, like Jane Addams or Ernie Pyle.

I read as many of these books as I could find. They influenced me in childhood and for the rest of my life. Later, as an adult, I bought them up in used book stores and yard sales and have since given many of them to my grandchildren.

Though the current publisher, Simon & Schuster, has trimmed down this long list of titles, Seton carries the classics of this series. Here are the biographies—Washington, Abigail Adams, Davy Crockett, Annie Oakley, and more—that entranced me as a boy, sparked a lifelong interest in history, and helped teach me virtue.

Summer’s the season for outdoor play, vacations, camps, and for some teenagers, a time to work jobs outside the home.

Usually, summer brings a more leisurely pace for Seton families. Some may continue homeschooling while others take the traditional vacation from formal studies, but nearly all homeschoolers follow a less rigorous academic schedule.

Summer also provides the opportunity to learn some history away from the classroom and textbooks.

With the warmer weather, we can take our children to historic sites, including those close to home. To further enhance our knowledge of the past, we can watch movies or documentaries about our country, the Liberty Kids series on YouTube, for instance, or films like Johnny Tremain and Gods and Generals.

Of course, we can also explore history through books and reading, and Seton offers stories that can entertain us while increasing our familiarity with the past. Novels like Caddie Woodlawn, Old Yeller, The Custer Legacy, The Virginian, and Death Comes for the Archbishop all whisk us back into earlier days.

In addition, our public libraries stock historical fiction that should appeal to students. Kenneth Roberts’ sagas about colonial and revolutionary periods, Jeff Shaara’s Civil War novels, Betty Smith’s A Tree Grows in Brooklyn, and scores of other books tell the story of the United States.

Seton homeschoolers in other countries around the world might also view their vacation from formal schooling as a chance to deepen their knowledge of their nation’s past through visits to museums and historical sites and books and films.

Then out spake brave Horatius,
The Captain of the Gate:
“To every man upon this earth
Death cometh soon or late.
And how can man die better
Than facing fearful odds,
For the ashes of his fathers,
And the temples of his gods….”

Whatever our nationality, like Horatius, most of us revere that piece of earth containing the ashes of our fathers and our churches.

We homeschooling families have the opportunity, the right, and the obligation to educate our children about the accomplishments of those who have gone before us, those who fought on battlefields or in the public square for their nation, and who sacrificed so much for the rights and traditions we enjoy today.

We must also teach our young people that future circumstances may require them to offer these same sacrifices on the altar of freedom.

Here in the United States, these next few months bring us holidays to honor those who have made such sacrifices: Memorial Day, Flag Day, and Independence Day. We can pay homage to our American heroes by learning their stories.

Our homeschooling brothers and sisters around the globe can do the same, familiarizing themselves with the men and women who helped create, protect, and defend the nation in which they live.

We can all build and strengthen virtue within ourselves by learning their stories.