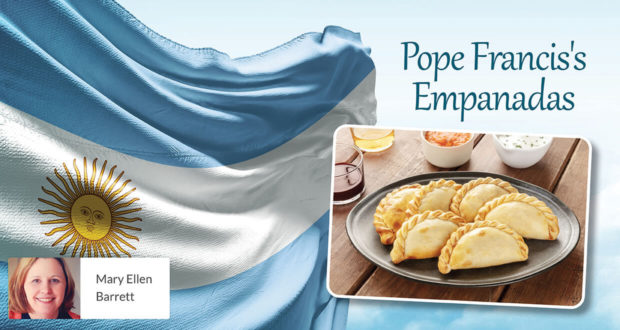 For Pope Francis, his favorite treat is the humble empanada, the popular, hearty portable meal for workers brought to South America by Spanish settlers.

Pope Francis is the first South American Pope to be elected in the whole history of our Holy Mother Church. He hails from Argentina, which has a cuisine heavily centered around beef.

Argentina is known worldwide for having the most delicious beef, credited to the diet of the free-ranging cows mainly fed on pampas grass.

In several interviews, the Holy Father has mentioned that his favorite food is empanadas. Empanadas are made from a flour-based dough, fashioned in a hand pie shape with a meat filling. The humble empanada originated in Spain in the early 1500s and was brought to South America by Spanish settlers, where it became popular as a hearty and portable meal for workers.

Here is a recipe, (adapted from Bon Appetít September 2021), so you too, can enjoy the Holy Father’s favorite dish.