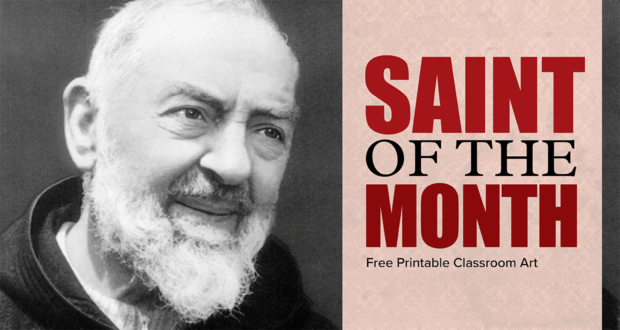 St. Padre Pio bore the wounds of Christ and he is the patron saint of civil defense volunteers, adolescents, and stress relief. His feast is September 23.

This is the motto St. Pio of Pietreclina, popularly known as Padre Pio, advice followed throughout his life and an encouragement for all to follow.

Francesco Forgione was born in 1887 to peasant farmers from Pietrelcina, Italy. His parents, Grazio and Maria, were devout Catholics and would take their children to daily Mass. Francesco was an obedient and humble child who had a a love of prayer.

Even though his health as a child was poor, he had a strong spirit and offered his sufferings to God. When he was five years old, he dedicated his life to God. It was around this time that he started to have visions of Jesus, Mary, and his Guardian Angel.

As a boy, it was Francesco’s responsibility to take care of the family’s small flock of sheep. Because of this and his poor health, he fell behind in his schooling. When he expressed his interest in the priesthood, his parents took him to the nearest friar community in Morcone to see if they would accept him.

The friars said they would, but he would need further studies. In order to pay for private tutoring, his father went to America to earn money. At age 15, Francesco took the Habit of the Order of Friars Minor Capuchin. He took the name of Pio in honor of St. Pius V, patron saint of Pietrelcina.

As a Capuchin novitiate, Brother Pio was still battling with his poor health and had to be sent home to Pietrelcina a couple times to recover. He still studied and followed the rules of his order whether he was home or at the friary. He distinguished himself with his obedience, humility, and piety. His goal was to be a “perfect Capuchin.” he took this prayer to heart:

“Oh God! Make me always experience You more in my heart and fulfill in me the work You have begun … May Jesus give me the grace to be a less unworthy son of St. Francis; that I may be an example to my fellow friars, in such a way that my fervour always increases, to make me a perfect Capuchin.”

With the start of World War I, many men were drafted including the Capuchins. Padre Pio served his country in the 10th Company for the Italian Medical Corps. He was eventually discharged from the military for health reasons and was sent to San Giovanni Rotondo, where he stayed for most of the rest of his life.

There he taught seminarians, prayed with the townspeople, and became a spiritual director.

The Gift of the Stigmata

In 1910, a miracle occurred; Padre Pio received the gift of the stigmata. At first, he felt embarrassed and humiliated about it being seen and begged Jesus to make them invisible. He wanted to suffer in private without others having to know.

Jesus heard his prayer and allowed the physical wounds to disappear, but Padre Pio still felt their piercing pain. In 1918, the stigmata appeared again but this time it would remain permanently visible until shortly before his death.

While he wished to suffer privately, news spread about an Italian priest with mysterious wounds on his hands and feet. Experts and doctors from all over came to examine Padre Pio’s wounds but could not diagnose or explain them.

Many Faithful came to see him and have him hear their confession. Letters poured in seeking his guidance. He’d spend over 10 hours a day in the confessional, hearing confessions. Padre Pio once wrote:

“I haven’t a moment free. All my time is spent in setting my brothers free from the snares of Satan. May God be blessed … Innumerable people of all classes and of both sexes come here for the sole purpose of making their confession, and I am only sought for this purpose. There are some wonderful conversions.”

There were those who were skeptical of Padre Pio, however, and sent accusations against him to the Holy Office. As a precaution, his superiors tried to transfer him to a more secluded friary, but when the townspeople heard this, they refused and set up guards around San Giovanni. It was decided that Padre Pio would stay but given restrictions limiting his access to the people.

Under these new rules, Padre Pio could no longer hear confessions, or respond to letters asking for his counsel. Further, he had to hide the stigmata, was given a different spiritual director, and was only allowed to celebrate Mass privately.

Through all of this, Padre Pio showed perfect obedience to his superiors. He was willing to leave when they first told him about the possible transfer and restrictions, saying “may God’s Will be done.” Instead, he spent his time in prayer and meditation.

He had a special devotion to the Blessed Mother and would continuously pray the Rosary throughout the day. He would call the rosary “those sweet beads that bind us to God.”

His source of strength, however, was the Eucharist. He had such a love for the Eucharist that when he celebrated Mass, he would remain at the altar for more than three hours. “How could I live, my dear Father, if I were to fail even for a single morning to receive Jesus?” He placed all his faith and trust in Jesus. In 1933, the restrictions finally were revoked and he was allowed to serve the people again.

The House to Relieve Suffering

In 1940, Padre Pio started a project he would later call his “great work in this world:” The House for the Relief of Suffering. He always had great compassion for the sick and wanted to find a way to help them. The home was to be a haven for those suffering in both body and soul.

Through donations and prayers, they were able to start building. In 1947, the foundation stone was laid, and in 1950 the hospital was officially opened.

The hospital originally had 300 beds but has grown to about 1,200 beds having expanded over the years with many added wings. Today, they have obstetrics, gynecology, and pediatric wards among others. It has become a true model of a Catholic hospital.

By the 1960’s, Padre Pio was beginning to feel his age. When someone asked him how he was, he would reply: “I feel shattered, but may God’s Will be done!”

He continued to do God’s work to the point where he was almost bedridden. On September 23, 1968, fifty years after he first received the stigmata, Padre Pio passed away and was buried at San Giovanni Rotondo. Years later, he was canonized a saint in 2002 by Pope Saint John Paul II.

St. Pio of Pietrelcina, pray for us.

Download the free printable monthly saint page using the button below. You can pin it to your classroom wall or place it on your refrigerator to help your children learn more about Saint Pio.