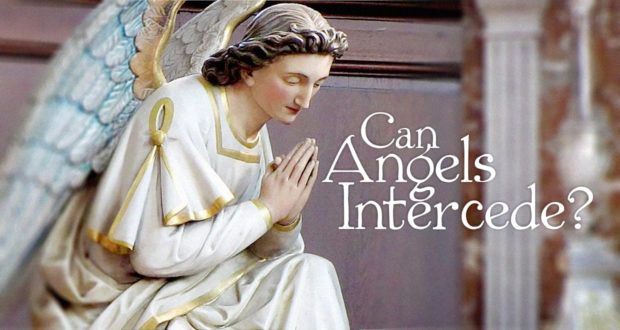 Praying to Angels and Angelic Intercession

We know that angels pray to God for us; such as the “angel of the Lord” praying to God for the inhabitants of Jerusalem and other cities of Judah (Zech 1:12).

Non-Catholic Christians believe that we can pray to no one but God, and ask no one to fulfill an intercessory prayer request but God. But what does the Bible teach?

In the Old Testament, Lot makes such a request of two angels, who were sent by God to destroy Sodom and Gomorrah (Gen 19:13):

One of them grants his “prayer” (19:21): “Behold, I grant you this favor also, that I will not overthrow the city of which you have spoken.” Someone might say, “but the angel wasn’t in heaven.” Location makes no difference: the angel still fulfilled an intercessory request.

Angels can talk to us from heaven. For example: “the angel of God called to Hagar from heaven” (Gen 21:17). And we know that angels pray to God for us; such as the “angel of the Lord” praying to God for the inhabitants of Jerusalem and other cities of Judah (Zech 1:12), and the angel offering to God at the altar in heaven the “prayers of the saints” (Rev 8:3-4).

Yet in other passages he is distinguished from God. (Zech 1:12 above, and the following:

2 Samuel 24:16 And when the angel stretched forth his hand toward Jerusalem to destroy it, the LORD repented of the evil, and said to the angel who was working destruction among the people, “It is enough; now stay your hand.” And the angel of the LORD was by the threshing floor of Arau’nah the Jeb’usite.

This ambiguity (seeming equation with God in many places, and distinction from Him in others) is explained by St. Augustine, as cited in the 1911 Catholic Encyclopedia article on “Angels”:

St. Augustine (Sermo vii, de Scripturis, P.G. V) when treating of the burning bush (Exodus 3) . . . points out: “Elsewhere in the Bible when a prophet speaks it is yet said to be the Lord who speaks, not of course because the prophet is the Lord but because the Lord is in the prophet; and so in the same way when the Lord condescends to speak through the mouth of a prophet or an angel, it is the same as when he speaks by a prophet or apostle, and the angel is correctly termed an angel if we consider him himself, but equally correctly is he termed ‘the Lord’ because God dwells in him. . . . It is the name of the indweller, not of the temple. . . .”

Scripture also clarifies how the angel of the Lord is a unique representative of God:

Exodus 23:20-22 “Behold, I send an angel before you, to guard you on the way and to bring you to the place which I have prepared. [21] Give heed to him and hearken to his voice, do not rebel against him, for he will not pardon your transgression; for my name is in him. [22] But if you hearken attentively to his voice and do all that I say, then I will be an enemy to your enemies and an adversary to your adversaries. [23] When my angel goes before you, . . .” (cf. 33:14)

The angel being delegated to pardon transgressions is an interesting precursor to priestly absolution and “binding and loosing.”

Therefore, given the above Scripture and analysis we may also, I submit, plausibly interpret the “angel of the Lord” as a created angel who nevertheless profoundly “carries” God’s name and presence.

Such intermediaries between men and God should not surprise us since even the Law was mediated to men by angels: “delivered” by them (Acts 7:53), “ordained by angels through an intermediary” (Gal 3:19), and “declared by angels” (Heb 2:2). They even help distribute His grace (Rev 1:4).

Thus, as we have already seen above in the Bible: angels can be prayed to and answer prayers, as an additional mediatorial angelic function.