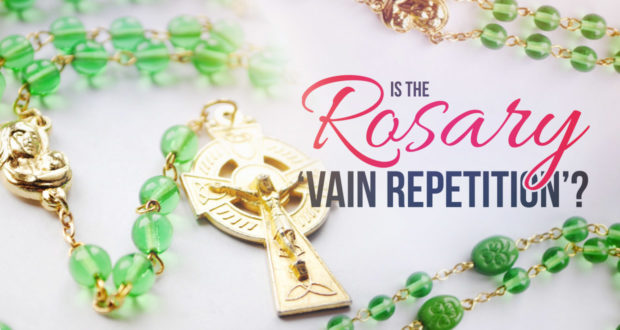 Is the Rosary “Vain Repetition”?

A new Catholic convert who was “struggling” with some things in the faith asked me about the Rosary some years ago:

Mary is most often mentioned in its entirety. I find it difficult meditating on Christ when Mary is so prevalent. Why is Mary so heavily infused into the prayer?

Here is my reply:

One must understand the nature of the Rosary and the purpose of the repetition. Most of the words of the Hail Mary are, it should be noted, straight from the Bible. And it’s incorrect to say that because “Mary” may be the word repeated more than any other in the Rosary, that, therefore, she is considered more important than Jesus, or the focal point of the Rosary meditation.

The intent of the repetitions of the Hail Mary prayer is to form a sort of “background music,” so to speak, to the meditations on (mostly) the life of Jesus.

It reminds me a bit of an analogy from my past as a trombone player in my high school band and orchestra. We had to play at graduations every year (much to my chagrin), the famous Pomp and Circumstance, by Edward Elgar. 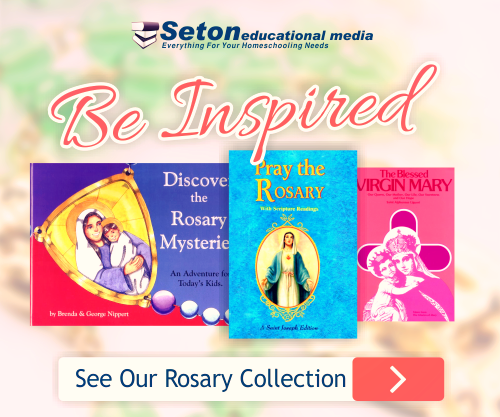 Now, was the purpose of the commencement ceremony to hear Pomp and Circumstance 71 times? No, of course not. It was to honor the graduates for their accomplishment in achieving a high school diploma. The music was the background, just as a soundtrack to a movie is.

It’s not a perfect analogy (few are), but the Hail Marys in the Rosary are, at least in part, a sort of rhythmic background to the meditations. It’s a way (rather ingenious, when fully understood) to move forward in the prayer, and to avoid distraction (something we are all very familiar with when we try to pray).

You say it is difficult to meditate on Christ while repeating the Hail Marys. This is, I would venture to guess, probably mostly a function of the unfamiliarity with the Rosary. It’s very different from much of Protestant piety, just as things like penance and purgatory and prayers for the dead or asking saints to pray for us are quite foreign at first to the typical Protestant mind. It’s a “learned art,” to a large extent. Your experience is common to many converts.

We find in the Bible a similar sort of repetitious, chant-like form. Take, for example, Psalm 136, where the same exact phrase: “for his steadfast love endures forever” (RSV) is repeated for 26 straight verses! The Hail Marys in the Rosary are somewhat like that. But they are not “vain repetitions” (Mt 6:7 in KJV; cf. “heap up empty phrases” in RSV; also, Sirach 7:14: “Do not . . . repeat yourself in your prayer.”)

Protestants who argue that all formal prayers that repeat phrases are “empty” or “vain” manage to overlook the entire deeper meaning and import of this biblical narrative, in context. Jesus is recommending and exhorting His hearers to a genuine, humble piety of the heart, as opposed to an empty, shell-like, merely external piety, intended to be seen by men in a spiritually prideful sense.

Lastly, in Matthew 6:7, Jesus qualifies what He is opposing in prayer, with, “as the Gentiles do.” He’s not talking about the Hebrew tradition of prayer (which quite obviously included much repetition, such as in the Psalms and priestly chants and prayers). He’s not even talking about (His frequent target) the Pharisees, but rather, the “pagan” or “heathen” (according to various translations) Romans and Greeks: people who followed a different and ultimately false religion. That element and the aspect of interior piety indicate that the passage is far more than merely a discussion of repetition: let alone all repetition, as if God is condemning that.

Jesus Himself used repetition in prayer. For example: “he went away and prayed for the third time, saying the same words” (Mt 26:44; cf. Mk 14:39). Moreover, we know that worship in heaven is extremely repetitious:

We should recall all these things the next time we hear repetitious or indeed any formal prayer condemned as “vain repetition” or supposedly impious by nature. Citing one scriptural passage out of context without considering related biblical data is always dangerous.