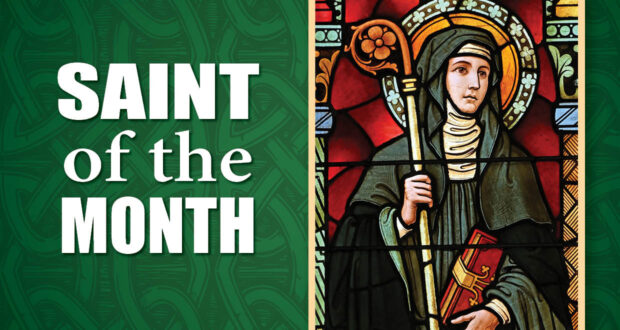 Blessed with a generous spirit, Brigid, born to a slave, was graced to perform many miracles, do great works, and go on to inspire a nation.

She was born to a slave named Brocca and named after a Celtic goddess. Her father, Dubhthach, was a Leinster chieftain. While pregnant, Dubhthach sold Brocca to a Druid landowner, and she worked in his dairy.

Bridget’s charity and care for the poor were apparent from an early age. She often gave away food and was said to be able to heal the sick. Legend has it that she once gave away her mother’s entire store of butter, which was later miraculously replenished when she prayed for her mother to forgive her.

When Brigid was ten years old, the Druid landowner, tired of her charity with his food and possessions, returned her to her father. She was still unable to deny anyone who came to her in need, and soon Dubhthach, angered by her generosity, brought her to the king of Leinster, intending to sell her as a slave. While speaking to the king, Brigid saw a beggar and, seeing his need, gave him her father’s bejeweled sword to sell to buy food for his family.

An Act of Kindness

Observing her kindness and generosity, the king recognized her holiness, for he was a baptized Christian. He convinced Dubhthach to grant Brigid her freedom telling him, “Her merit before God is greater than ours.”

After being freed, Brigid immediately returned to her mother to work in the dairy of the Druid. She resumed her charity of giving away milk and butter, but the dairy somehow prospered despite her donations. Soon she returned to her father, who wished to marry her to the king of Ulster. She prayed that God would deprive her of her beauty so that she could remain chaste and serve Him. God granted that prayer.

The King of Leinster granted Brigid a plain on which she founded the first monastery for women. Seven women joined her, and Saint Conleth was pastor to them. Brigid’s oratory at Kildare developed into a cathedral city and was a center of learning. She founded a school of art, metalwork, and a scriptorium. Their illumination work drew high praise.

There is much evidence that Saint Brigid and Saint Patrick were close friends, and God performed many miracles and great works for Ireland through them.

Brigid died on February 1, 525. She is the patroness of Ireland, dairymaids, cattle, midwives, Irish nuns, and newborn babies. She is often depicted holding a reed cross, a crozier, or a lamp.

Saint Brigid of Kildare, pray for us!

Download the free saint of the month poster designed by Emily Prause using the button below. You can pin it to your classroom wall or place it on your refrigerator to help your children learn more about Saint Brigid of Kildare.