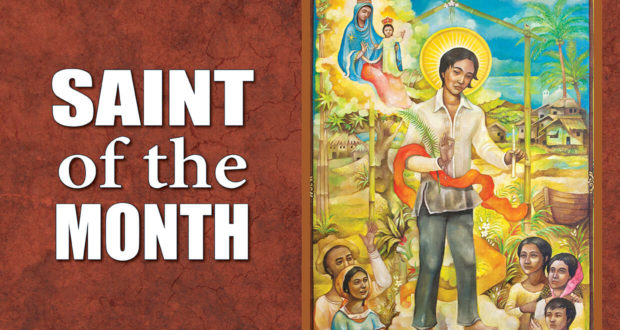 Lorenzo was a family man living a faithful life in the Philippines. Through an extraordinary set of circumstances, he was called to give his life for Christ.

Saint Lorenzo Ruiz was born in Binondo, Manila on November 28, 1594. He was the son of a Chinese father and a Filipino mother who were both devout Catholics.  His mother taught Lorenzo to speak Tagalog and his father taught him Chinese. Lorenzo was raised to be a good Catholic who loved God and his faith very much. He served happily in his parish church in Binondo as an altar boy and was educated by the Dominican friars for several years. He earned the title Escribano (scrivener or calligrapher) for his beautiful penmanship.

As a young man, Lorenzo joined the Dominican Confraternity of the Most Holy Rosary and eventually married a woman named Rosario. The couple had three children, two sons and one daughter, and by all accounts, the family was an ordinary, happy family living a faithful but unremarkable life.

All of that changed in 1636 when Lorenzo was accused of murdering a Spaniard.  It is believed that while two Spaniard soldiers were engaged in a fight one stabbed the other, and to avoid prosecution he blamed Lorenzo.  Certain to be held accountable for a crime he did not commit Lorenzo sought asylum on a ship with three Dominican friars who were sailing to Okinawa with a Japanese priest.  They left on June 10, 1636, and they were hoping to help the growing but persecuted Christian community in Japan as missionaries.

At the time of their arrival, Japan was being ruled by the Tokugawa Shogunate, a military dictatorship that ruled from 1603 – 1867. The Tokugawa Shogunate was concerned with political stability and was fearful of foreign ideas. Knowing that the colonial expansion of Spain and Portugal in Asia had been made possible by the work of Roman Catholic missionaries, the Tokugawa shoguns came to view the missionaries as a threat to their rule. They outlawed Christianity, exiling, arresting, and executing any priests and Catholics they could find. This was the Japan in which Lorenzo and his companions landed filled with hope about helping.

They were almost immediately arrested and put into prison where they remained for two years.  After two years the prisoners were taken to Nagaski to face trial by torture.

They were assured that they would be spared if only they would renounce their Catholic faith. Lorenzo and his companions, the four priests, steadfastly refused to recant their faith despite gruesome and painful torture. Missionaries who escaped later reported Lorenzo’s last words,

(I am a Catholic and wholeheartedly do accept death for God;

Had I a thousand lives, all these to Him shall I offer.)

This quiet family man living his faithful and unremarkable life in the Philippines through an extraordinary set of circumstances ended up in a foreign land and was called upon to give his life for his faith and he did so with great joy, sad that he only had that one life to give.

St. Lorenzo Ruiz, Pray for Us!

Download the free printable monthly saint page using the button below. You can pin it to your classroom wall or place it on your refrigerator to help your children learn more about Saint Lorenzo Ruiz. The Downloadable poster is designed by Emily Prause.