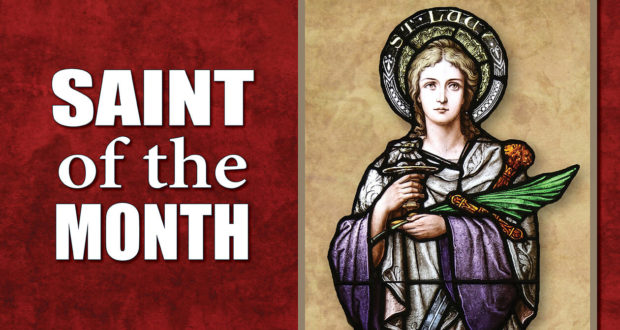 Lucy consecrated herself to God and was true to her promise of purity even through horrible torture. She is one of the seven women mentioned in the Mass.

The first account we have of Saint Lucy’s life comes from the fifth-century Acts of the Martyrs. According to tradition, Lucy was born into a wealthy family of noble parents about the year 283 A.D. in Syracuse, Sicily. Her name comes from the Latin word lux meaning light and she is often referred to as a light in the darkness, her feast day being close to the longest day of the year.

It is believed that her father was a Roman nobleman, but little is known of him other than he died when Lucy was about five years old. This left Lucy and her mother without a guardian.

Like many early Christian women Lucy consecrated herself to God, promising to live in purity and prayer for her whole life. However, her mother, Eutychia, was very ill with a bleeding disorder and was afraid to die and leave her daughter without a guardian. Unaware of Lucy’s consecration, she arranged a marriage between her daughter and a pagan.

Lucy persuaded her mother to go on a pilgrimage to Catania in Sicily where there was a shrine to Saint Agatha. While her mother was away Saint Agatha appeared to Lucy in a dream to tell her that because of her faith her mother would be cured.

When her mother returned, completely healed, Lucy persuaded her to give their wealth away to the poor, including Lucy’s dowery. When the young man to whom Eutychia promised Lucy’s hand in marriage discovered this he denounced her to Paschasius, the Governor of Syracuse. Paschasius ordered her to worship a pagan image and when Lucy refused, she was tortured. Among other things, her eyes were gouged out, which is why in iconography Lucy is often painted with eyes placed on a platter.

Through all her torture, God prevented her purity from being defiled and even preserved her from burning alive when the attempt to do so was made. Eventually, Lucy died by the sword. It is said that when her mother prepared her body for burial, her eyes had been restored.

Saint Lucy is one of the seven women mentioned in the Roman Canon (Eucharistic Prayer) of the Mass. She is the patron saint of eye illnesses, the blind, ophthalmologists, stained glass workers, salesmen, and martyrs. Her feast day is December 13th.

A wonderful way for the family to celebrate St. Lucy’s Feast is with this delicious recipe. Many have made it an annual tradition with the youngest girl in the family, dressed in a white nightgown and a wreath on her head serving coffee and cake for breakfast.

Download the free printable monthly saint page using the button below. You can pin it to your classroom wall or place it on your refrigerator to help your children learn more about Saint Lucy. The Downloadable poster is designed by Emily Prause.