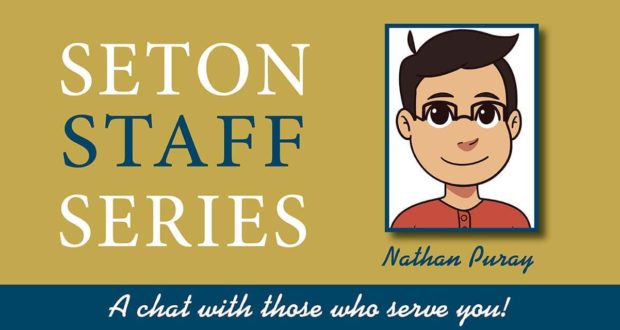 The joy about working at Seton? Graphic Designer Nathan Puray thought a long moment, then opened with, “There is a genuine moral good in working here…”

In addition to his work in graphic design and illustration for Seton, Nathan is a White Belt in Brazilian Jiu-Jitsu—“I usually go five times a week,” he says. He is also a full-time student at nearby Lord Fairfax Community College, where he is earning a degree in fine arts, and loves painting in oils.

A native of Front Royal, Virginia, Nathan grew up with a Seton education. In high school, he joined fellow homeschoolers at the St. John the Baptist Catholic Church’s Aquinas Academic Center, now renamed Padre Pio, where again he used a good deal of Seton material for his education.

After high school, Nathan decided to become a freelance graphic designer and audio engineer. He became an expert designer and illustrator, knowledgeable in different computer programs.

In July 2016, Nathan joined the Seton staff in the shipping department. When Jim Shanley, Seton’s Director of Marketing, discovered Nathan’s design talents, he began working part-time as a graphic designer and eventually became Seton’s full-time illustrator. One of his most recent projects has involved the development of the illustrations for the kindergarten
phonics program.

When asked what he most enjoyed about working for Seton, Nathan thought a long moment, and then said: “There is a genuine moral good in working here. Seton is a very strong example of the modern-day education system. It puts the power back into the parents’ hands so that they know their children and know the Catholic faith.

It’s a great good to participate in that, just knowing that you’re able to help someone and help a family. The youth are our future. Seton provides an anchor for many families, which is nice.”