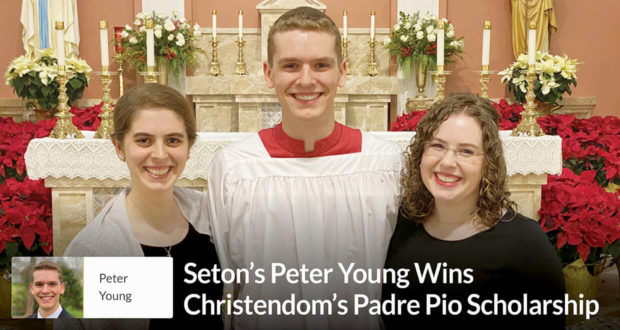 This year, Christendom College awarded three full-tuition scholarships to academically excellent students judged on their performance
in an on-campus interview and essay contest.

Because of Seton’s strong writing courses, I had the skills and confidence to write an essay while participating in Christendom’s Padre Pio Full-Tuition Scholarship Competition this past April. In the first part of the competition, we had fifty minutes to write an essay in response to a prompt based on a text they had sent in advance.

During the first half, I crafted an outline and fleshed out some ideas before writing, which felt natural after Seton’s strong emphasis on the importance of an outline throughout the years.

When I finished, I knew that I had written a complete, organized, well-thought-out essay that addressed the prompt. While the essay was just one component of the competition, it no doubt played a key part in my winning one of the three full-tuition scholarships.

Seton has profoundly impacted my life as a Catholic and as a student. Throughout the thirteen years of my intellectual formation through Seton, I have received a unique, rigorous, and thoroughly Catholic education for which I am very grateful.

In particular, the solid theology courses and the Catholic culture of the curriculum have helped me strengthen and appreciate my Catholic Faith. I have also learned how to appreciate good literature, read and think analytically, and write well-organized and thoughtful essays through Seton.

I have also benefitted from being a part of the Catholic Harbor community. Since it opened over four years ago, I have enjoyed conversing with fellow students from all over the world and have developed a love of debate.

I have also had the opportunity to serve in leadership positions on Catholic Harbor as the first Seton Chess Club President and as one of the student moderators of the site.

I am very much looking forward to attending Christendom this fall. While at Christendom, I will dive deeper into History, English, and Theology while learning new disciplines such as Philosophy and Political Science.

I hope to deepen the reading, writing, and thinking skills that I built up over the years as a Seton student. I also look forward to participating in campus activities, such as debates, swing dances, and spiritual life activities.