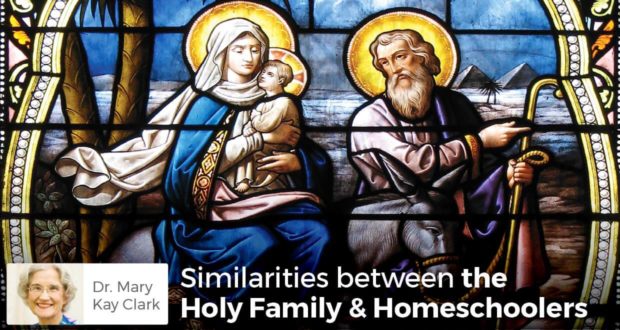 Similarities between the Holy Family & Homeschoolers

Good St. Joseph, the head of the Holy Family, was told by an angel in the middle of the night, that he immediately must take the Baby Jesus and His holy mother Mary and escape in the dark to safety in Egypt.

Joseph immediately gathered up the little family and a few provisions and, before the sun came up, began the difficult trip to a foreign land.

Joseph had strong Faith in God. When an angel appeared about a year before and told him to wed the young Mary who was living in the Jewish Temple, he immediately made plans.

When Joseph was later uncertain about Mary, an angel came again and told him that she was carrying the Son of God by the miraculous intervention of the Holy Spirit.

Joseph was a man of immediate obedience and trust in God. At the third recorded angelic appearance, as the head of the holy household, Joseph once again recognized his God-given responsibility to obey the heavenly messenger. He awakened Mary, and before the sun rose, they were on their way.

As the sun slowly came up at their backs, it lit the unfamiliar dusty road with their long shadows ahead of them. In the still-dark sky, they saw a brilliant shining star leading westward to the unfamiliar land of Egypt.

It is traditional belief among Catholics of Egypt that the angel who directed the Holy Family from behind also gave miraculous “coverage” as protection from robbers.

The tradition is that St. Joseph, the head of the Holy Family, a strong, well-built carpenter, walked the whole journey of about 300 miles for about thirty days, briskly pulling the harnesses of the two donkeys that carried Mary and the Holy Child, and the family’s few belongings.

It was revealed to St. Bonaventure that the road was difficult to travel, rough and dirty, as it was a little used back road. This road would keep the family safe from robbers and away from other curious travelers.

In addition, the Holy Family was traveling in the winter season when it was cold and windy.

St. Bonaventure meditated, “How did they obtain their food? Where did they repose at night since there were no inns on that road? They must have slept on the sand or under a tree. They must have appeared as ‘poor wandering beggars’.”

There are similarities between the Holy Family’s flight from King Herod to Egypt and homeschooling families’ retreat from schools which “endanger” their children. With inspiration from Heaven’s guardian angels, homeschooling parents have rejected the dangerous agenda of secular anti-Catholic values and beliefs.

Having made this decision, we must trust that God will guide us in many ways, especially through our guardian angels, pushing us from behind as we follow the “star” of heavenly inspiration. Sometimes the move to homeschooling seems about as drastic as moving from Bethlehem to Cairo.

Homeschooling parents must continue to rely on their guardian angels to stand by them, to give them confidence, patience, trust, and moral strength for the long dusty road ahead of them.

Catholic homeschooling families must continue to look to the Holy Family and the “heavenly star” of God’s leading light, praying for safety along the road, and for the same determination to endure “leaving” friends and family to protect their children’s eternal destiny.

Guardian Angels, pray for us and our children. Amen.