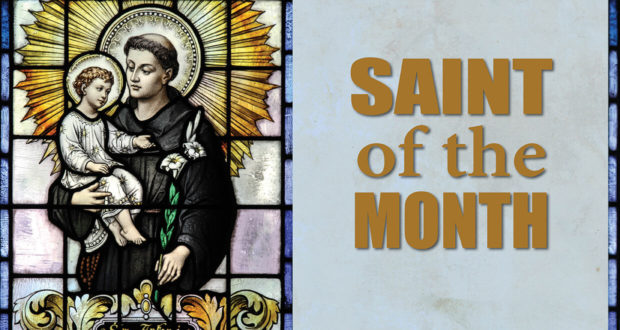 Anthony’s sermons were eloquent, passionate, and knowledgeable and while they were profound, they were simple enough for the average person to understand.

It was a simple enough beginning when St. Anthony of Padua’s superior asked him to give a small speech at a gathering for the ordination of Dominicans and Franciscans in 1222.

Indeed, no one would have thought this humble young Franciscan friar would later be known as the “Hammer of the Heretics,” let alone become a Doctor of the Church.

A Witness for Christ

St. Anthony of Padua was born in Lisbon, Portugal, in 1195 to a prominent Portuguese family. His parents named him Fernando. At age 15, he entered the Augustinian religious order, where he studied theology and Latin, eventually becoming a priest.

In 1220, the bodies of five Franciscans martyred for spreading their Faith to the Moors returned to Europe, and they passed through Fernando’s city. Their martyrdom gave Fernando an intense longing to follow in their footsteps and be a witness for Christ to the Moors as well. After a little difficulty, he was able to join the Franciscan Order and changed his name to Anthony.

Anthony was soon on his way to Morocco himself to spread the word of God. However, he became gravely sick and had to return to Europe. On the way back, the ship was blown off course and landed on the coast of Sicily. While recovering, Anthony lived in a small hermitage where he spent his time praying, meditating on the Scripture, and doing menial tasks.

Being a humble man, Anthony did not talk a lot about himself; so, no one knew how knowledgeable he was in the Faith when he joined the Franciscans. That changed when he gave a small sermon at the ordination of Dominicans and Franciscans. This short sermon was the beginning of his remarkable and influential public speaking career.

Anthony’s sermons were very eloquent, passionate, and knowledgeable. They were simple for the average person to understand but profound. They taught not only what Catholics believe but also how to put it into practice in everyday life and how to come closer to God.

Anthony’s preaching eventually brought him to the attention of St. Francis of Assisi. They became fast friends. In 1224, Francis wrote to Anthony asking for help, “It pleases me that you should teach the friars sacred theology, provided that in such studies they do not destroy the spirit of holy prayer and devotedness, as contained in the Rule.” For the next few years, Anthony traveled throughout Italy, preaching theology to his fellow friars.

While preaching to the friars, Anthony used a special book of psalms. It was a time before the invention of the printing press, so books had to be handwritten and were considered very valuable. However, that was not the only reason why this particular book was unique. It also contained all of Anthony’s notes and comments for teaching theology.

The story goes that the book vanished when a novice left the Order. When Anthony realized the book was missing, he prayed for its return. Shortly after, not only was the book returned, but the novice returned to the Order as well! Today, the book is preserved at a Franciscan friary in Bologna.

Because of this and other stories, St. Anthony is considered the “Finder of Lost Articles.” Many Catholics pray for St. Anthony’s intercession to help find something they have lost. One such prayer is:

Preaching to the Fish

After a while, Anthony switched from preaching to the Franciscan friars to preaching to Albigensian heretics in southern France. His method of converting was by preaching Church doctrine in simple and easy to understand ways while presenting the magnificence of the Faith positively. He returned so many to the Faith that he is considered the “Hammer of the Heretics.”

One legend has it that one time Anthony was trying to preach the Gospel, but everyone in the city refused to listen to him. So he went out and gave his message to the fish. When the people saw that the fish were gathering around Anthony, they realized they should listen to him as well.

Visits from the Infant Child

There are many stories of the Infant Child Jesus appearing to St. Anthony. One such story took place when he was visiting the Lord of Châteauneuf. Anthony was praying deep into the night when suddenly the child Jesus appeared before him. The room filled with light and laughter. Seeing the light beneath the door, the lord of the house looked in to investigate. There he saw St. Anthony holding the Infant Child in his arms! When the vision ended, Anthony begged him not to share this story until after his death.

After about three years, Anthony returned to Padua to resume writing sermons and to preach to help other preachers. In 1231, he preached his last and most memorable Lenten sermons. There was such a crowd that the churches couldn’t hold everyone. So he began preaching out in the piazzas and open fields. Each day after Mass and his sermons, Anthony fasted and heard confessions the rest of the day. He spent so much energy that Lenten season that he had to go to a small town near Padua to rest and recover.

Realizing he was close to death, Anthony tried to travel back to Padua, but the wagon ride was too much. He only made it to Arcella, where he received the Last Rites. His fellow friars were singing and praying with him when one asked what he was staring at so intently. Anthony replied, “I see my Lord!”

St. Anthony died shortly after on Jun 13, 1231, at only 35 years old. He was declared a saint a year later by Pope Gregory IX. His body was exhumed about 336 years later, and his tongue was found incorrupt. Belief has it that this miracle is a testament to the perfection of his sermons about the Catholic Faith. In 1946, Pope Pius XII declared him a Doctor of the Church.

St. Anthony is typically depicted with a book, for his knowledge of the Faith and his preaching and a lily for his purity. He is often pictured holding the Infant Child.

St. Anthony of Padua is the patron saint of lost things and the poor. His feast day is June 13.

St. Anthony of Padua, pray for us.

Prayer of St. Anthony of Padua

“O Holy St. Anthony gentlest of Saints, your love for God and Charity for His creatures, made you worthy when on earth, to possess miraculous powers. Encouraged by this thought, I implore you to obtain for me (request).

O gentle and loving St. Anthony, whose heart was ever full of human sympathy, whisper my petition to the ears of the sweet Infant Jesus, who loved to be folded in your arms. The gratitude of my heart will ever be yours. Amen.”