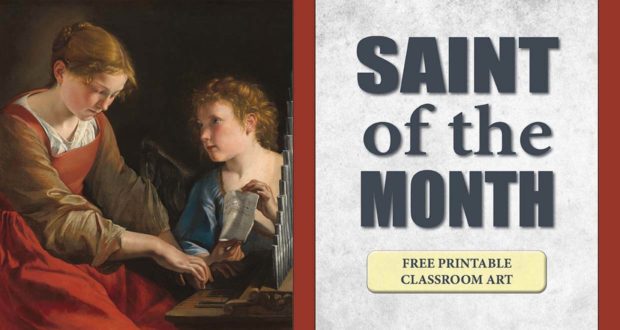 Patroness of music and musicians, St. Cecilia is one of only seven women, including the Blessed Virgin Mary, listed in the canon of the Roman Catholic Mass.

Saint Cecilia lived in the late second century and is believed to have been the daughter of wealthy Romans.  She was renowned for her beauty and purity of heart and was determined to give her life entirely to God.  Her parents, however, forced her to marry a young nobleman named Valerian. During her wedding ceremony, she sang out in her heart to God asking him to protect her virginity.

After the nuptials, she told Valerian that she had taken a vow to remain chaste and that an angel was protecting her. Valerian asked to see the angel. Cecilia told Valerian that he would see the angel if he walked to the third milestone on the Via Appia (the Appian Way) and asked Pope Urban to baptize him.  This Valerian did and upon returning to Cecilia he saw the angel crowning her with a chaplet of roses and lilies. He then dedicated his own life to God.

After his baptism, Valerian and his brother Tiberius worked in the catacombs burying the martyred Christians while Cecilia preached to and converted hundreds of pagans.  Pope Urban baptized many Romans sent to him by Cecilia.

Eventually, Valerian and Tiberius were caught and executed, and shortly thereafter Cecilia was sentenced to be suffocated. She was locked in a Roman bathhouse for three days while fires were stoked continuously, however, when the doors were opened Cecilia was still alive and singing in her heart to God.  After that, the Roman prefect Turcius Almachius sent an executioner to behead Cecilia.  He was not successful in decapitating her, having struck three times, so he left her bleeding and wounded. Cecilia continued to pray with and preach to all who came to see her and after three days she died from her wounds.

Pope Urban then ordered a church built in her honor in Trastevere in Rome at the site of the house in which she grew up.

During an excavation of the catacombs in Rome in 1599 Cecilia’s body was discovered. She was incorrupt, wearing a gold dress and with a veil over her face. It is said that her grave was permeated with an odor of flowers. She was moved to Trastevere and her body was laid to rest under the high altar.

Saint Cecilia is one of only seven women, including the Blessed Virgin Mary, mentioned in the canon of the Roman Catholic Mass. She is the patroness of music and musicians and is usually depicted holding an instrument.