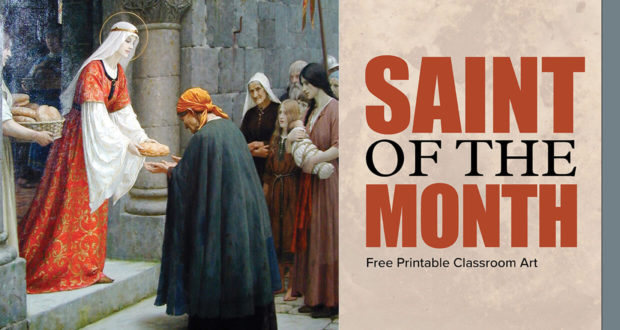 Rather than live a life of luxury, noblewoman St. Elizabeth of Hungary, chose to serve the Suffering Christ through service to the poorest of the poor.

These words truly guided Saint Elizabeth of Hungary’s life. She is known for her Christian charity, receiving praise from Pope Benedict XVI as a “model for those in authority” because of her dedication to the service of others, especially the less fortunate.

A Life Spent in the Service of Others

Born in 1207 to the King of Hungary, Elizabeth could have lived a life of luxury and ease; instead, she chooses a life of faith and charity. She was a pious child, always willing to help those in need. At age 4, she was sent to the court of the Landgrave of Thuringia for education.

Ten years later, her marriage was arranged with Ludwig IV of Thuringia, who, as it turned out, she was deeply in love with. They had a loving and happy marriage and were blessed with three beautiful children.

With her husband’s support, Elizabeth led a simple life of prayer and used her position to serve the poor. She built a hospital, and would personally care for the sick. Elizabeth sent clothing to the needy, and every day gave bread to those in need. “Everything I own really belongs to the poor,” she once said.

After leaving to join the crusades, tragedy struck the royal household when Ludwig, died from an illness. Despite the pressure from her family, Elizabeth vowed never to remarry and lived a life similar to a nun’s. In 1228, she joined the Third Order of St. Francis.

So inspired by St. Francis and his way of life that Elizabeth not only followed his way but using her dowry also built a hospital in his honor. For the rest of her short life, she cared for the sick and continued to support the poor.

St. Elizabeth of Hungary died on November 17, 1231, at the age of 24. Soon, miraculous healings occurred near her gravesite and hospital. These miracles and eyewitness accounts led to her canonization just four years after her death.

Although many miracles occurred after her death, the most famous miracles of St. Elizabeth happened during her lifetime.

The Miracle of Roses

It is said that one day in mid-winter while delivering bread to the poor, St. Elizabeth met her husband, who was out hunting. Wanting to clear her name from those of his hunting party who suspected her of stealing, Ludwig asked to see what she was carrying.

When she opened her cloak, the bread had transformed into roses. Ludwig took this as a sign that she was doing God’s work, and let her continue on her way.

Crucifix in the Bed

Another miracle occurred when, while caring for the sick, Elizabeth decided to take in an abandoned little leper boy. She laid him in her bed and cared for him like a mother.

When her mother-in-law heard of this, she was outraged and told Ludwig. Disturbed, Ludwig went to bed and pulled back the covers. Instead of a leper boy, he was amazed to he saw the figure of Christ crucified stretched upon the bed. He then told his wife, “Dear Elizabeth, you may always receive guests like that. I shall even thank you for it.”

A Prayer to St. Elizabeth of Hungary

Almighty and Eternal God, lover of mankind and defender of the poor, look kindly upon your Church and inspire within her heart an ever new and zealous love for the poorest of the poor. Through the intercession of your beloved servant, St. Elizabeth of Hungary, who was moved with great compassion for the downtrodden, may we all look upon the face of the poor as if we were gazing on the face of Christ; for truly we are.

Help us to champion the cause of the poor and destitute and to serve them with heartfelt charity, a charity that originates and flows from your Trinitarian mystery. Amen.

Saint Elizabeth is the patron saint of bakers, brides, and Catholic charities.

St. Elizabeth of Hungary, pray for us.

Download the free printable monthly saint page using the button below. You can pin it to your classroom wall or place it on your refrigerator to help your children learn more about Saint Elizabeth of Hungary

Emily Prause is a Graphic Designer for Seton Home Study School. She is a Seton alum of 2009, and received a B.F.A. in Graphic Design from James Madison University in 2015. She loves learning about the saints, and enjoys using her talents to share that love with others.
bakers brides catholic charities christian faith crucifix emily emily-prause helping the poor miracle of roses prause saint of the month saint poster collection service of others seton magazine st elizabeth of hungary st. francis 2019-11-14
Contributing Writers