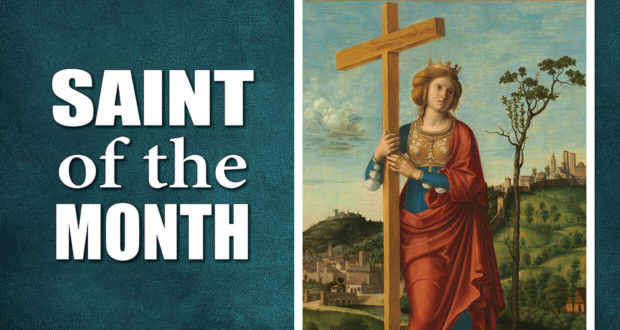 St. Helena of the Cross – Patron of Discoveries

Constantine tasked his mother Helena to travel the Empire and gather holy objects. It was during these pilgrimages that Helena discovered the True Cross.

Saint Helena was the mother of Saint Constantine the Great and an Empress of the Roman Empire.

Despite her humble background, Helena married Constantius Chlorus, a military commander who eventually became a junior emperor. Helena gave birth to her only son Constantine in about the year 274 A.D. Twenty years later Chlorus divorced Helena to marry Theodora who was the daughter of Emperor Maximinianus Herculius which enhanced his status with the Roman upper class.

When Helena’s son Constantine became Emperor of Rome in 306 A.D. his influence resulted in her conversion to Christianity. Helena was eventually given the title Augusta and was considered the first lady of the Roman Empire.

Constantine tasked his mother to travel through the Empire and gather holy objects scattered due to years of war and persecution. Helena’s pilgrimages led her to build churches on such holy sites as the birthplace of Jesus, the Church of the Nativity, and the site of His Ascension, the Church of Eleona.

It was during these pilgrimages that Helena discovered a temple dedicated to Venus that was built upon the site of the crucifixion. She immediately ordered the temple destroyed and the Church of the Holy Sepulchre constructed there. In the process, workers discovered three buried crosses, one bearing the sign Jesus of Nazareth, King of the Jews. Helena had found the True Cross.

When she returned to Rome from Jerusalem in 327 A.D., Helena brought parts of the True Cross back with her. She stored these in the chapel in her palace and they can still be seen, in that same palace which has been converted to the Basilica of the Holy Cross in Jerusalem.

St. Helena also found many other relics during her pilgrimages. Among them are parts of Jesus’ tunic, the nails used during the crucifixion, and pieces of rope used to tie Jesus to the Holy Cross.

St. Helena, Pray for Us!

St. Helena of the Cross died around 330 A.D. with her beloved son by her side. She was buried in the Mausoleum of Helena outside of Rome and her sarcophagus can be seen in the Pio-Clementine Vatican Museum. She is the patron saint of discoveries and her feast day is August 18.

Download the free printable monthly saint page using the button below. You can pin it to your classroom wall or place it on your refrigerator to help your children learn more about Saint Helena. The Downloadable poster is designed by Emily Prause.