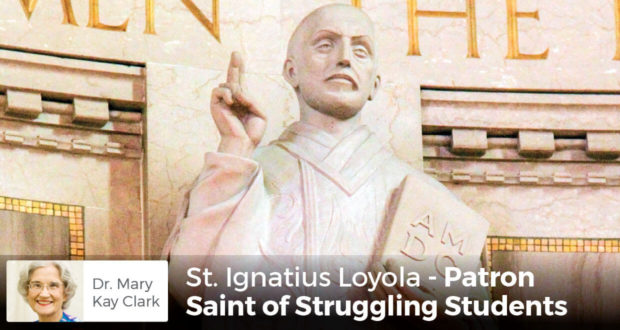 Dr. Mary Kay Clark makes the case for St. Ignatius Loyola, the founder of the Jesuits, to be the patron saint of students who struggle with their studies.

St. Ignatius Loyola, the founder of the Jesuits, has been long regarded by many Catholics as an intellectual powerhouse.

However, St. Ignatius should be recognized as the patron saint of students who struggle with their studies.

St. Ignatius’ father was a soldier in the Spanish army, and when Ignatius was old enough to fight in his teens, he became a soldier like his father despite his devoutly Catholic mother’s objections.

When only thirty years old, Ignatius’ left leg was seriously wounded by a cannon ball in battle. Desperate to distract his mind from the terrible pain, Ignatius asked a nurse to bring him a book to read. She brought him two, and her book choices would be an instrument to change the world. They were The Life of Our Savior and Lives of the Saints.

These two books changed the course of Ignatius’ life. As he read about Jesus and the saints, he compared his life as a Spanish soldier with the lives of saints who lived for, suffered for, and died for Jesus—not to attain honors in the military, but to attain eternal life.

Ignatius decided to give up soldiering and instead to teach others about Jesus and the saints. Since he no longer had any income, he begged daily to support himself and others in need.

As Ignatius begged on the streets, he taught people about Jesus and how they could follow Jesus. When faced with questions, however, Ignatius realized how ignorant he was about the Catholic Faith. With money from begging, at the age of 30, he enrolled in a Catholic university.

University classes proved difficult for Ignatius, who lacked study skills. The students, some of whom were half his age, teased him. The professors noted his slowness in learning, and told him that his ongoing begging made his academic life even harder.

Sometimes Ignatius was criticized by university leaders for promoting the Faith while dressed in very poor clothes which were given to him by begging. He was also criticized because he would spend so much time at the local hospital helping the sick and the dying, and on the streets begging for the poor.

Nevertheless, Ignatius trusted that God would give him direction as to whom he should meet, where he should go, what he should teach, and what he should learn. He developed his own thirty-day program of Spiritual Exercises, of Bible readings, prayers, reflections, and good works for the sick and the poor. He was not discouraged by pain, hunger, sickness, or criticism. He did not give up begging for the poor, in spite of the constant difficulties of learning his lessons.

Eventually, after some years and various difficulties, Ignatius and his followers were ordained to the priesthood. They lived in poverty, begging for clothes and food for themselves and for the poor.

They also worked among the sick in the hospitals. Seeing the good they were doing, the pope decided that Ignatius and his followers should be officially formed as a community, changing their name from The Company of Jesus to Jesuits.

St. Ignatius and his followers and successors went on to evangelize all around the world. In many ways, their evangelization efforts have never been surpassed to this day.

Home schooling families can see St. Ignatius of Loyola as a patron. We home schooling parents and grandparents must be patient with the sufferings of discouragement or of learning difficulties in our children and grandchildren. We must help our children to understand that they can use their daily learning difficulties as a way of learning to trust in Jesus and to grow in our Catholic Faith.

Like St. Ignatius, we can cheerfully offer our learning challenges to Jesus, and grow in humility along the way.

St. Ignatius should inspire home schooling parents to accept the fact that not all students learn at the same rate. Lesson plans are written as guidelines and suggestions—not as commandments.

Parents need to emphasize to their children the importance of continuing and not giving up. The fact that Saint Ignatius was willing to enter college at age thirty should help parents and students to realize that suceess is not related to learning certain topics at certain ages.

St. Ignatius of Loyola can inspire our children to realize that God will provide the help needed to be successful in their studies, but in His time frame.

St. Ignatius should inspire students to understand that it is not important how much time it takes to learn, but rather that, with prayer, we must continue to try.

St. Ignatius, pray for us.