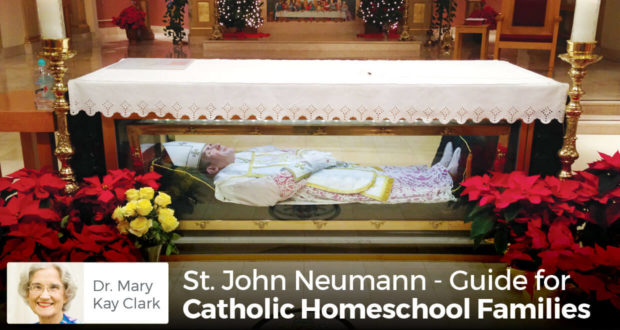 St. John Neumann was a born catechist and devoted to faithful religious teaching. His spirit and dedication is a marvelous guide for Catholic homeschoolers.

On January 5th, we celebrated the Feast of John Nepomucene Neumann, the first male American citizen and first American bishop to be canonized.

John Neumann was born March 28, 1811, to a respected middle-class family in the small town of Prachatitz in the southwestern regions of what is now the Czech Republic. As a child, he developed a reputation for diligence and understanding at the local village school. At twelve, he entered a six-year course in the nearby city of Budweis.

He evinced a keen delight in the humanities, and distinguished himself in the sciences, particularly botany and astronomy. At 20, he entered the seminary for the Diocese of Budweis, where he excelled in Scripture studies. He also pursued the study of languages, far beyond what was required from the curriculum.

Soon after entering the seminary, a combination of the preaching of a missionary and his study of the Pauline epistles inflamed in Neumann a strong desire to be a missionary. To prepare for such hardship, he began to deny himself food, sleep, and material comforts.

Determined to put even more effort into languages, he transferred to a seminary in Prague to study both French and English. Unfortunately, since neither French nor English classes were available, he turned to conversing with immigrant factory workers, studying dictionaries, and reading familiar or useful texts in translation. After a year, Neumann was able to pass a French examination and write his journal in English.

This journal is really an examination of conscience, and one which Neumann never dreamed would be seen by others, but it details how much like anyone else Neumann was in personal weakness, self-doubt, and temptation.

However, it is notable for its simultaneous demonstration of Neumann’s faith, radical dependence on God, extreme humility (though he considered pride his besetting sin), and commitment to seeking perfection and doing the will of God.

Expecting to be ordained in the summer of 1835, Neumann was sorely disappointed that it did not happen. He traveled to America without ordination. On the Feast of Corpus Christi, 1836, St. John Neumann set foot on land in New York City. Bishop John Dubois, needing a German-speaking pastor for several outlying parishes, agreed to ordain Neumann to the priesthood immediately. Seventeen days after his arrival in America, Neumann was a priest.

From 1836-1840, Neumann worked tirelessly in the Buffalo district of the New York diocese. Regardless of the weather, he traveled on foot among small and extremely poor country parishes, ministering to the faithful, helping erect churches, teaching children, and ensuring the transmission of faith. In the midst of this, he continued to grow in personal fervor and discipline, writing himself a rule of life and committing to more prayer and sacrifice.

These inclinations of his interior life inspired Neumann to seek entry into the Redemptorist novitiate in Pittsburgh, Pennsylvania. In 1842, he made his profession and was sent to help the Redemptorists’ mission work in Baltimore.

After distinguishing himself by hard work and perfect obedience for two years, he was sent back to Pittsburgh to become the new superior of the Redemptorist foundation in that city.

As superior, Neumann took all the most mundane, humble, and difficult tasks upon himself to the point of destroying his health, so that at the end of his three-year term, he was sent back to Baltimore to recover. However, he was almost immediately made the superior general for the entire order in the United States.

Though Neumann was an effective and holy leader, the problems of a growing congregation in a sometimes hostile and rapidly changing environment were frequently overwhelming for him, and he never felt at ease in his role. He petitioned for removal from the post and was relieved in 1849.

In 1851, the archbishop of Baltimore, Francis Patrick Kenrick, made Neumann his confessor. Kenrick was soon convinced that Neumann would make a good bishop for what was now the empty diocese of Philadelphia. Upon Kenrick’s recommendation and favorable input of other American bishops, Neumann was appointed by Pope Pius IX.

Though he never relished his office, Neumann worked tirelessly from 1852 until his death in 1860. During that time he taught himself Spanish and Gaelic so that he could minister to all the people in his charge; daily visited the seminary to encourage vocations; oversaw the building of 65 churches, including the Cathedral of Sts. Peter and Paul which stands to this day; instituted the Forty Hours’ Devotion throughout his diocese, thus enshrining it as an American tradition; and inaugurated the Catholic parochial school system.

A born catechist, Neumann held dearer than anything sound instruction in the faith, and to ensure it, he established a diocesan-wide Central Board of Education, of which he was the president.

To ensure consistency and longevity for the work of the Board, Neumann invited seven different teaching orders to take charge of the schools in his diocese.

The example of his work in this regard became the foundation and example for parochial schools throughout the land. It is precisely this tradition of devotion to truth and faithful religious teaching that Catholic homeschoolers today carry on within their homes.

In his declaration of Neumann as Venerable in December 1921, Pope Benedict XV stated the following:

“We shall not pause to remark that works ,even the most simple, performed with constant perfection in the midst of inevitable difficulties, spell heroism in any servant of God. Just because of the simplicity of his works, we find in them a strong argument for saying to the faithful of whatever age, sex, or condition; you are all bound to imitate the Venerable Neumann.”