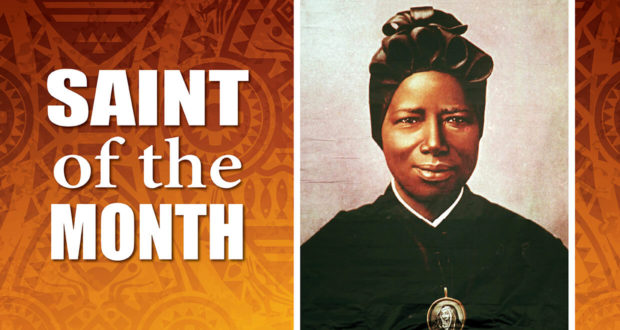 St. Josephine Bakhita – The Lucky One

Kidnapped and sold into slavery, Bakhita miraculously was lead to the Canossian Sisters serving others for forty-two years with her ever-present smile.

St. Josephine Margaret Bakhita was born around the year 1869 in the Darfur region of Sudan. Her father was the brother of the tribal leader, so her family was prosperous, and she had a happy early childhood. All changed in February of 1877 when Josephine was kidnapped by Arab slave traders and forced to walk six hundred miles to the slave auctions in El Obeid.

She was bought and sold twice over the course of the journey. It was so traumatic to young Josephine that she forgot her given name, so the traders with a cruel humor, called her Bakhita which is the Arabic word for “lucky”.

Over the next twelve years, St. Josephine was bought and sold three more times, enduring unimaginable cruelty from her master. Once, beaten so severely, she was unable to get out of bed for a month, all for the crime of breaking a vase.

Another owner had patterns carved into her skin with a razor in a practice of tattooing which was traditional in Sudan. A total of 114 patterns were carved into Bakhita’s body with salt rubbed into the wounds to ensure permanent scarring.

In 1883 St. Josephine Bakhita was bought by Italian Vice Counsel Callisto Legnani who treated her kindly and brought her to Italy to serve his family. When the family had to return to Sudan for a short time, they left St. Josephine in the care of the Canossian Sisters in Venice.

It was here that Josephine was instructed in the Catholic faith. She was happy and at peace. In her autobiography she wrote, “those holy mothers instructed me with heroic patience and introduced me to that God who from childhood I had felt in my heart without knowing who He was.”

When the Legnani family returned to Italy St. Josephine refused to leave the convent. After three days of trying to persuade her, the family took the case to court trying to force St. Josephine to leave. The Italian court determined that since slavery had been illegal in Sudan before she was kidnapped, Josephine should never have been kidnapped nor enslaved and therefore was free. With great joy, and for the first time in her life, St. Josephine could decide her own fate.

On January 9, 1890, she received all the sacraments of initiation and On December 7, 1893, Josephine Bahkita entered the novitiate of the Canossian Sisters and she took her final vows on December 8, 1896. It was then that she was given the name Josephine Margaret.

St. Josephine spent forty-two years as a cook, sacristan, and portress for the community and was often in contact with the locals. She was affectionately known as Sor Moretta (little brown sister) and her gentleness, sanctity and ever-present smile made her a much-beloved member of the order and of the town of Schio.

When on duty at the door she would often lay her hands on the children who attended the Canossian schools and give them a blessing in her musical voice which had the inflection and rhythm of her country. She was much loved by those children. The publication of her story in 1931 made her famous throughout all of Italy.

The last years of St. Josephine’s life were filled with illness and pain but she remained cheerful and happy. When asked what she would say if she could meet the tormentors from her past she declared, “If I were to meet those who kidnapped me, and even those who tortured me, I would kneel and kiss their hands. For, if these things had not happened, I would not have been a Christian and a religious today”

In her final days, Mother Bakhita relived her days of slavery begging her nurse to loosen the chains. St. Josephine entered eternal life on February 8, 1947. A crowd quickly gathered at the convent to have a last look at their Sor Moretta and to ask for her prayers from heaven.

Pope John Paul II canonized Bakhita on October 1, 2000, and sadly the news of this was censored in Sudan. In response to this censorship, the Pope traveled to Sudan nine months later and honored her publicly at a Mass. She is the patron saint of Sudan and her feast day is celebrated on February 8.

Download the free printable monthly saint page using the button below. You can pin it to your classroom wall or place it on your refrigerator to help your children learn more about Saint Josephine Bakhita.