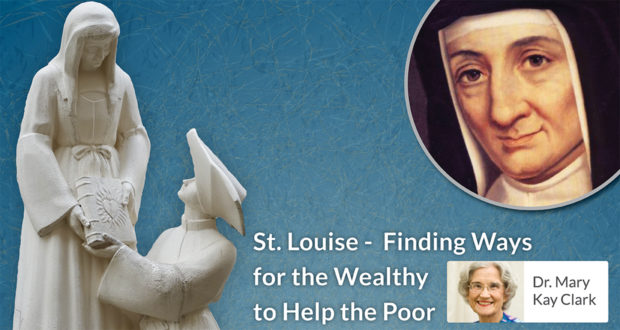 St. Louise – Finding Ways for the Wealthy to Help the Poor

Under the direction of St. Vincent de Paul, St. Louise was successful in using her social background to ask the wealthy for donations to the poor and needy.

St. Louise, whose feast the Church celebrates on May 9, has a special place in our family.

My maternal grandmother Louise came to the United States as a child with her French family as they traveled from South America and settled in Arizona. Grandmother Louise met Army Sergeant John Churchill, married him, and relocated to Washington, D.C. Their child, Jacquelyn, became my mother.

I still remember hearing stories from my Grandmother Louise about her grandparents arriving in the New World in South America. My grandmother was a distinguished lady who gave her love and time to her grandchildren. In that regard, my grandmother and St. Louise had much in common.

St. Louise de Marillac was born into a noble French family in 1591. Since her mother died when she was very young, she was raised by her single father, who taught her at home and then sent her to a good Catholic school run by nuns.

At age fifteen, after her father died, Louise thought of entering a convent, but instead, she married a well-to-do gentleman. They had a son, but her husband died after twelve years of happy married life.

Once again, Louise felt called to be a nun, but she wanted to be active in the community, especially helping poor mothers take care of their children.

In 1619, in Paris, she met St. Francis de Sales, who helped her pray about her future work to help families. However, it was after she met St. Vincent de Paul that Louise found specific direction for her future apostolic work.

St. Vincent de Paul believed that middle-class ladies should help mothers of poor families raise and provide for their children and teach them the Faith. Father Vincent established an organization of middle-class women to help the poor, but he needed a leader who could interact with wealthy families to donate the money for necessities.

Recognizing her background, education, intelligence, and devotion, Father Vincent put Louise in charge of his new organization, which came to be known as the Daughters of Charity.

Louise traveled to various cities throughout France to meet with wealthy women to obtain donations, and to meet with middle-class women to establish a location for the poor to receive what they needed.

In 1633, a wealthy widow offered her own property to help those who were sick. Louise gathered ladies to help, and they soon formed an order known today as the Sisters of Charity of St. Vincent de Paul. Louise took charge of this apostolate, helping the ladies to live a spiritual life along with their apostolate.

St. Vincent de Paul continued to help the poor in various ways. One day, he found a child who had been abandoned, so he decided to start a home for abandoned children.

Since Louise was well-educated, she started an educational program for some of her women helpers so they could help in teaching abandoned children. Louise kept constantly busy helping women in these various apostolic works in different towns.

As Louise grew older, she eventually became unable to help others as much as she had done previously, but she counseled her fellow sisters to “serve the poor, love the poor, honor them, my children, as you would honor Christ himself.”

Louise could have enjoyed the aristocratic upper lifestyle of French life, but she dedicated her money, her time, her lifework, to helping the poor. Louise used her high-status social background to enter the homes of the wealthy in order to ask them to donate money to the poor and needy.

She was surprisingly successful, and was instrumental in founding several organizations consisting of women who agreed to give their time and energy for
the poor.

Most of all, St. Louise, pray for us to share our Catholic Faith with those who are “poor” in not knowing the love and teachings of Jesus.