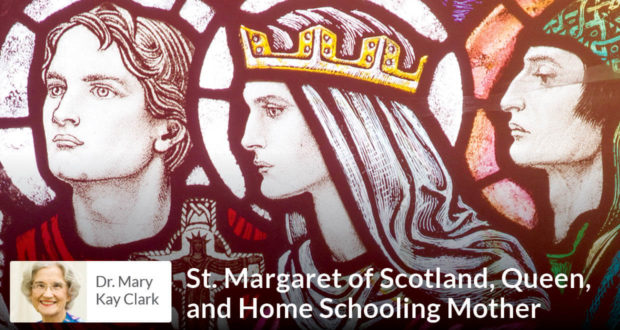 Though Saint Margaret of Scotland lived and died almost one thousand years ago, she remains one of the most beloved people in her nation’s history.

I need not look far for a reminder of that fact.

My husband’s family, which is 100% Scottish, has two names peppered throughout their lineage going back many centuries. For boys, the most popular name is Bruce, because his family can be traced back to Robert the Bruce. The most popular girl’s name has been Margaret or Elizabeth, in honor of Saint Margaret of Scotland.

Around the year 1045, Margaret was born in Hungary to Prince Edward of England and Princess Agatha of Hungary. When Margaret was a young girl, her royal family returned to England, but upon arrival, her father was killed.

Some years after, fearing for her family’s safety, Princess Agatha gathered her family and set sail to return to Hungary. On their way, however, a storm arose, and their ship was wrecked on the shores of Scotland. Seeing their plight, the Scottish king, Malcolm Canmore III, invited the family to stay in his castle.

Malcolm and Margaret quickly fell in love, and they were married.

Margaret’s devotion to Jesus, illustrated by her prayer life and daily Mass attendance, significantly influenced Malcolm. The Catholic influence of the king and queen quickly spread throughout Scotland.

Malcolm and Margaret built Catholic churches and chapels, promoted schools in churches, and initiated national conferences for Scottish bishops and priests to encourage them to promote traditional Catholic teachings when there was laxity in the practice of the Faith.

Malcolm and Margaret were blessed with eight children, and they raised them in their beloved Catholic faith. Queen Margaret was deeply involved in the Catholic education of her children. The queen attended Mass every day with her children, as well as teaching them the catechism daily.

As the royal couple’s children grew older, they not only taught them the Catholic Faith, but they also taught them how to practice their Faith by works of charity. Her eight children came to be known as intelligent, educated, disciplined, and involved with charitable work.

Margaret was devoted to the care and education of her eight children, but also to the children of Scotland, especially the poor. She asked mothers in need to bring their children to her kitchen door every morning, where she would put them on her lap, tell them stories about Jesus, and give them sweet breakfast pastries.

Through a special grace, it is believed, Margaret prayed throughout the night. She thanked God for her husband who loved her, who loved the children, and who loved helping the Scottish people he served.

As the queen, Margaret exhibited profound love and affection for the poor, the sick, and the suffering. Queen Margaret went out into the streets with her children to help those in the hospitals, the jails, and anyone else in need.

Later in life, her children, as kings and leaders, followed the path of their parents in practicing the Faith, supporting the priests and bishops, and helping the poor.

Saint Margaret of Scotland is a saint needed for today. She was not only dedicated to her family and her children’s education, but she also led her husband to be more involved in supporting the Church.

She led her children to be more involved in helping those in need in the community. She was knowledgeable about the true teachings of the Catholic Church and promoted them consistently in the churches.

Though Margaret was born into wealth, her personal life in teaching her children, in teaching them to serve others, and her life of daily Mass and daily prayers, gives all of us home schooling mothers an excellent example of dedication to serving family and community.

St. Margaret, pray for us home schooling parents, so Jesus gives us a special love for teaching our children to care for others less fortunate, and to help them realize that we have an obligation to Jesus to promote His truths in our community, in our parish, and in our family.

St. Margaret of Scotland, Queen and Home Schooling Mother, pray for us.