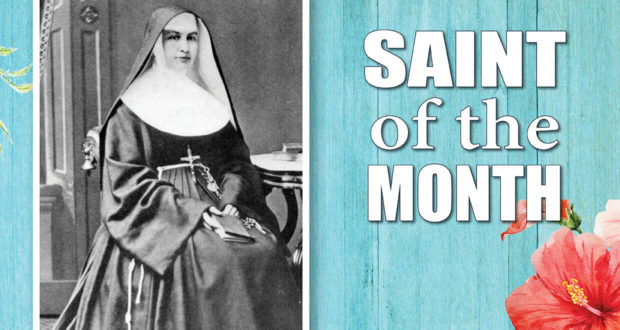 Mother Marianne, in the language of truth and love, worked tirelessly for her patients, the poor suffering from leprosy, even Saint Damien in his last days.

“I am not thinking of reward. I am working for God and do so cheerfully.“

On January 23, 1838, a daughter was born to Peter and Barbara Koob in Heppenheim, Germany.

Christened Barbara after her mother, she was just a year old when the family emigrated to Utica, New York. Changing their name to Cope to fit in America, Barbara attended their parish school. When she was in eighth grade, her father suffered a disability that necessitated her going out and finding work in a textile mill to help support her younger siblings.

When Peter Cope passed away in 1862, all of the children were old enough to support themselves, so Barbara could answer God’s call and so entered the novitiate of the Sisters of the Third Order Regular of Saint Francis Syracuse, New York. After a year of formation, Cope received the veil of the Franciscan Sisters and the name Marianne. She began to teach at the Assumption parish school and advanced to become the principal.

In 1870 Sr. Marianne was elected to the governing council of her order and took on the job of opening two hospitals in central New York. The hospitals’ charters declared that they would care for all those in need, whatever the race or creed of the patient.

Eventually, Sr. Marianne was elected Superior General of her order. In 1883 she received a message from King Kalakaua asking for aid in treating leprosy patients isolated on the island of Moloka’i. As she was then known, Mother Marianne took with her six sisters and, in November of 1883, arrived on the island to begin helping the sick.

Mother Marianne worked tirelessly for the patients in her care. She took on orphans, clergy, and the poor suffering from leprosy and even cared for Saint Damien in his last days. When Father passed away, the Hawaiian government asked her to work with the men and boys in his colony and oversee the female settlement. All this work took its toll on her body, eventually confining her to a wheelchair, but she never contracted the disease she fought so tirelessly.

On August 9, 1918, Mother Marianne passed away of natural causes and was buried on the grounds of the Bishop Home. Her remains were reinterred at her motherhouse in Syracuse in 2005 but returned to Hawaii in 2014. They are enshrined at the Cathedral Basilica of Our Lady of Peace in Honolulu.

On May 14, 2005, Cope was beatified in Vatican City by Pope Benedict XVI. Over 100 followers from Hawaii attended and 300 members from Cope’s religious congregation in Syracuse. At the ceremony, presided over by Cardinal José Saraiva Martins, C.M.F., the Hawaiian song “Makalapua” (a favorite of Cope) was sung.

Cardinal Saraiva said that Saint Marianne was a woman who “spoke the language of truth and love.” Her feast day is January 23 and is celebrated by her religious congregation, the Diocese of Honolulu, and the Diocese of Syracuse. Saint Marianne is the patroness of Hawaii, lepers, outcasts, and those suffering from HIV/AIDS.

St. Marianne Cope, Pray for Us!

Download the free saint of the month poster designed by Emily Prause using the button below. You can pin it to your classroom wall or place it on your refrigerator to help your children learn more about Saint Marianne.