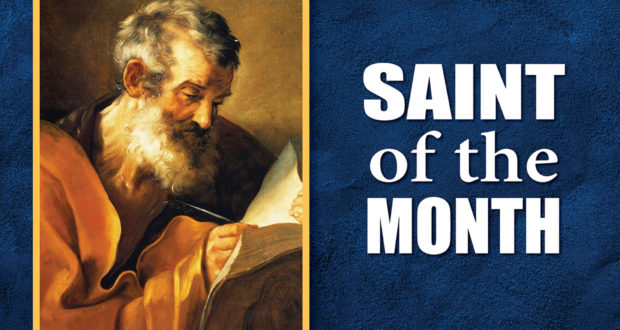 St. Mark the Evangelist, Pray for Us!

His symbol the winged lion, Saint Mark, comfort to Paul and founder of Alexandria’s first church was the first to bring the Gospel to Africa.

Saint Mark, although not a direct disciple of Jesus, played a vital role as a missionary in the early church and as the author of the second Gospel.

Mark, also known as John Mark, was born in Cyrene, Libya. His birth date is unknown, but we believe he was the son of Mary of Jerusalem, and their home was a meeting place for the early Christians and the apostles.

We first meet Saint Mark in the Acts of the Apostles. After Saint Peter was released from prison by the angels, he arrived at Mark’s home.

“… he went to the house of Mary, mother of John whose other name was Mark, where many had gathered and were praying.” Acts 12:12

Soon after, Mark set out with Saint Paul and Saint Barnabas to Antioch, but he decided to return to Jerusalem upon arriving in Cyprus. His return to Jerusalem caused tension between the three men, and they parted ways. Later, Barnabas went with Mark to Cyprus, while Paul continued to Syria and Cilicia with Silas.

In time, they made peace with each other, and Saint Paul writes in his letter to the Colossians, “Aristarchus my fellow prisoner greets, as does Mark the cousin of Barnabas concerning whom you have received instructions – if he comes to you welcome him.” Colossians 4:10. Later in the letter, Paul refers to Mark as a “comfort to him.”

In 49 A.D., Mark traveled to Alexandria, where he founded its first church. He became the Bishop of Alexandria and the first to bring the Gospel to Africa. Beginning in the year 60 A.D., Mark began to write down the sermons and teachings of Saint Peter and composed the Gospel.

Around the year 68 A.D., the pagans, tired of Mark’s efforts at turning away Egyptians from their gods, captured him, tied a rope around him, and dragged him around the city until he was dead. His remains were housed in Alexandria, in a church dedicated to him. They remained there until the year 828 A.D. when two Venetian merchants while venerating the remains, heard that a Muslim force was coming to profane the remains and destroy the church. Buono da Malamocco and Rustico da Torcello removed the holy relics. After a dangerous sea voyage, they brought them to Venice, where the duke immediately ordered a church built as a sepulcher.

Saint Mark’s symbol is a winged lion, and he is the patron saint of Venice, notaries, and barristers. His feast day is April 25th.

Download the free saint of the month poster designed by Emily Prause using the button below. You can pin it to your classroom wall or place it on your refrigerator to help your children learn more about Saint Marianne.