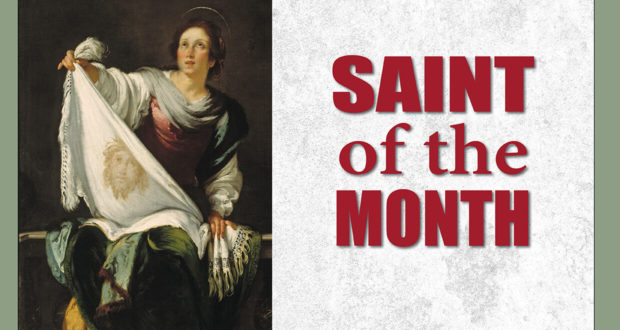 What we know about St. Veronica and her act of kindness is based on tradition, but still, her veil is considered one of the Church’s most treasured relics.

During Christ’s Passion, Jesus was beaten, whipped, and spit upon – not to mention the countless other cruel treatments

He endured. He had blood, sweat, and mud smeared across His face. The crowd mocked and jeered Him as He made His way to Golgotha, carrying His cross.

There was one person, however, who was filled with compassion and had the courage enough to step forward and show Him a small act of kindness. Her name was St. Veronica.

There is no mention of St.Veronica in the Bible, and no one knows her backstory or what happened to her after the Crucifixion. We know it has been passed down through Catholic tradition and commemorated in the Sixth Station of the Cross.

While Jesus was carrying His cross through Jerusalem, Veronica came forward and offered to wipe His face. Her kindness imprinted His image on her veil. This veil has become known as the Veil of Veronica and is considered one of the Church’s most treasured relics.

According to legend, Veronica left the Holy Land, taking the veil with her. She came to Rome and allegedly used it to cure the ailing Emperor Tiberius. From then on, the veil stayed in Rome and eventually placed in the Vatican and displayed for public veneration.

Rumors surfaced that it was destroyed in 1527 during the Sack of Rome. Also, around this time, many copies were created and passed off as genuine, so it became hard to tell which one was the original. The Vatican, however, had the veil that was most possibly to be the authentic relic since it could be traced back to the Medieval period.

In 1616, Pope Paul V banned the creation of more copies of the Veil of Veronica. In 1629, Pope Urban VIII ordered that all copies be destroyed or sent to the Vatican. Anyone who did not obey would be excommunicated.

Today, the Vatican still has the Veil of Veronica from the Medieval period preserved and in safekeeping, though it is rarely seen in public. It is displayed very briefly on the 5th Sunday of Lent each year.

Although what we know about Veronica is based on tradition, she is honored as a saint. Her feast day is July 12, and she is the patron saint of laundry workers and photographers.

We can follow St. Veronica’s lead and imitate her simple act of charity by treating others with respect and kindness and helping those who are hurt and in need.

St. Veronica, pray for us.

O My Jesus, Saint Veronica served You on the way to Calvary by wiping Your beloved face with a towel on which Your sacred image then appeared. She protected this treasure, and whenever people touched it, they were miraculously healed. I ask her to pray for the growth of my ability to see Your sacred image in others, to recognize their hurts, to stop and join them on their difficult journeys, and to feel the same compassion for them as she did for you. Show me how to wipe their faces, serve their needs, and heal their wounds, reminding me that as I do this for them, I also do this for You. Saint Veronica, pray for me. Amen.

Emily Prause is a Graphic Designer for Seton Home Study School. She is a Seton alum of 2009, and received a B.F.A. in Graphic Design from James Madison University in 2015. She loves learning about the saints, and enjoys using her talents to share that love with others.
compassion emily emily-prause Jesus kindniss pope urban VIII prause prayer Prayer to St. Veronica sorrowful passion St. Veronica tradition treasured relics. vatican veil veil of veronica 2020-07-11
Contributing Writers