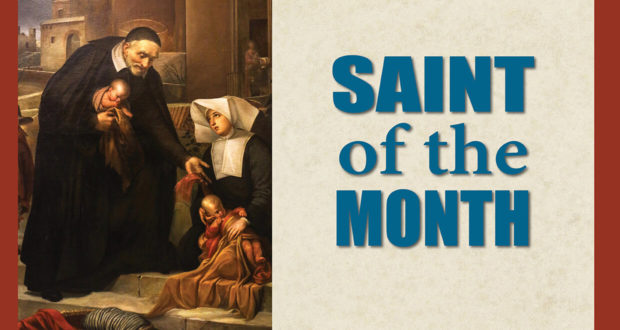 It was hearing the deathbed confession of a peasant that inspired Vincent de Paul to begin a lifetime of aid to the disadvantaged and bring souls to Christ.

Well known as the patron saint of charities, St. Vincent de Paul lived his life in service to the poor and was well known for his humility, compassion, and generosity; however, he was not always concerned for the plight of the poor.

Vincent was born in 1576, the third of six children to poor peasant farmers in the village of Pouy in France. Later in life, he fondly looked back upon the days when he was in charge of herding the family’s pigs.

He received his education from the Franciscans and did very well in his studies, well enough that he could tutor the children of wealthy families.

Vincent sought a life of ease and thought that the priesthood would accomplish that. To that end, he was ordained in 1600 and went to the University of Toulouse to complete his studies.

Smooth Sailing and Then…

His world was turned upside down when, returning from Marseilles, having sold some property he inherited, pirates captured his ship. He was taken to Tunis, sold into slavery, and remained enslaved for two years before escaping with his master.

When he returned to Europe, Vincent went to Rome, and eventually, he was sent back to France as chaplain to the Gondi family. It is here that Vincent, in the course of his duties, heard the deathbed confession of a peasant and forever after took on the cause of the poor and imprisoned. He surrendered to God’s will and abandoned his desire for a comfortable life.

At this time in France, priests were falling into heresy, and Queen Ann asked Vincent DePaul – at this time known for his great holiness and compassion – to help her right the wrongs and admonish the priests. St. Vincent held retreats, heard confessions, and rebuked heresy wherever he found it. He was instrumental in the evolution of clerical training and helped to establish several seminaries.

He was tireless in his efforts to aid the disadvantaged and bring souls to Christ. At night, Vincent would roam the streets of Paris, seeking the children left there to die. When his ministries were in danger due to a lack of funds, he organized an association of wealthy women to help. Not only did they provide desperately needed money, but he persuaded them to be present and to give of themselves to the poor.

A Legacy of Comfort to the Poor

Countess de Gondi and her husband endowed them, and the Ladies of the Association of Charity began their work in earnest. Vincent implored them to adopt these little creatures as their own.

“You have been their mothers according to grace when their own mothers abandoned them.”

The Society of St. Vincent, the Priests of the Mission, and 25,000 Sisters of Charity still comfort the afflicted with St. Vincent DePaul’s model of charity.

The Society of Saint Vincent de Paul, a charitable organization dedicated to the poor’s service, was established in 1833 by French university students, led by Blessed Frederic Ozanam. The society is today present in 153 countries.

St. Vincent provides a beautiful example for homeschooling families inspiring love for those in our communities who are in great need and a desire to serve God by serving them.

Through sheer perseverance and suppression of his desire for an easy life, he led souls to God and gave his best to all he encountered living in deprivation. Truly he lived the Gospel.

St. Vincent, patron of all charitable associations and father of those in misery, come to our assistance.

Obtain from Our Lord, help for the poor, relief for the infirm, consolation for the afflicted, and protection for the abandoned.

Provide a spirit of generosity for the rich, the grace of conversion for sinners, zeal for priests, peace for the Church, tranquility, and order for all nations, and salvation for them all.

May we be united in the life to come, by your intercession, and experience joy, gladness, and everlasting happiness. Amen.