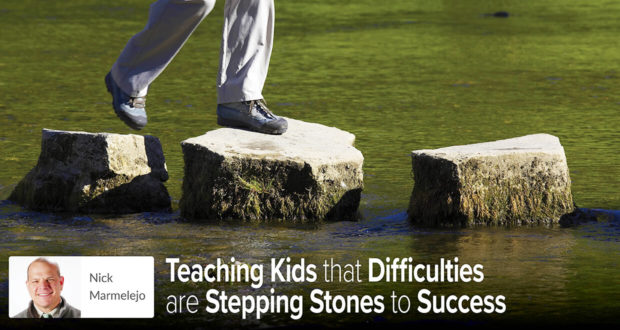 Teaching Kids that Difficulties are Stepping Stones to Success

Teaching our children to embrace difficulties and solve problems is a life lesson that will add value to their work and position them for future success.

When I was growing up in the Midwest, gray wintry days provided fertile ground for introspection and boredom.

I vividly recall such a time in the 7th grade, wherein I found myself staring at the classroom wall of the Catholic school I attended, reading all of the laminated signs with their typically bland inspirational slogans and aphorisms.

As a student in those days, I was more focused on the realms of imagination than listening to my teacher drone on in the manner of adults to the Peanuts gang. My personal thoughts and observations seemed far more important, not to mention more interesting, than the daily blather issuing forth from the front of the room.

Yet one of those signs caught my attention. It had a winding road on it, with the words “Difficulties are Stepping Stones to Success.” I laughed inwardly when first reading it, musing at the time that some hapless adventurer hanging off the side of a mountain would hardly view his situation as “a stepping stone to success.”

Of course, that thought generated an entire slew of imagined scenarios wherein a difficulty was, in fact, a real, life-threatening peril, and the main character in each is about to meet his doom.

Perhaps it is because the sign captured my imagination that its message stuck. I am confident that its author would have never imagined it as the subject of a magazine article decades after it was silly-puttied to the wall, but I digress. Despite its inherent irony, the message denotes the importance of mindset in tackling problems.

It has been said that “timing is everything,” but so, too, is attitude.

Eventually, I would reform my ways as a student, and pay attention in class, aspiring to the work of a scholar. After college, I found employment as a technical writer and then editor, and as it happened, I also found a new friend named Bob.

Bob was a spry, newly-minted retiree who had been a high-ranking brake-test engineer in his prime for one of the “Big Three” auto companies. We met on the streets in Alexandria, Virginia on a sunny weekend afternoon while casually discussing an impromptu musical performance on a street corner. The next thing I knew, I became the principal editor of his personal memoirs.

Bob had a great deal to teach from his life experience, and our weekly evening editorial meetings at Panera Bread frequently included discussion of the life lessons he learned along the way. One of the recurring themes from his work was to embrace life’s problems as they come. In fact, one day he showed up with a photocopied article from a business periodical that emphasized this particular theme.

Whether in the workplace or the classroom, positively embracing difficulties and proactively solving problems adds value to one’s work and positions one for further success down the road. It was compelling.

Bob would eventually move on to greener pastures from his Northern Virginia home, but time under his tutelage has continued to prove itself valuable, particularly as a homeschooling parent as well as a counselor in the Seton Guidance Department.

There is typically a great deal of optimism and excitement in the Fall for families just getting started with the new academic year. This feeling is often mixed with a bit of trepidation, especially for families new to homeschooling and those preparing to send their child to college.

However, in the thick of the school year, often an obstacle or series of obstacles present themselves, making the entire homeschooling endeavor seem bleak and gray. They can even make us question whether or not we made the right decision to homeschool, or if homeschooling should be abandoned altogether.

As parents and teachers, we must prepare for these moments. They are inevitable. They are also natural to the process. If we embrace them with a can-do attitude, we will find that most problems have a solution that we can work towards. Not every academic problem can be solved in a day, and some problems require outside help.

At Seton, we are an email or phone call away to help you when you encounter such a roadblock. We aim to make your difficulties a stepping stone to success.