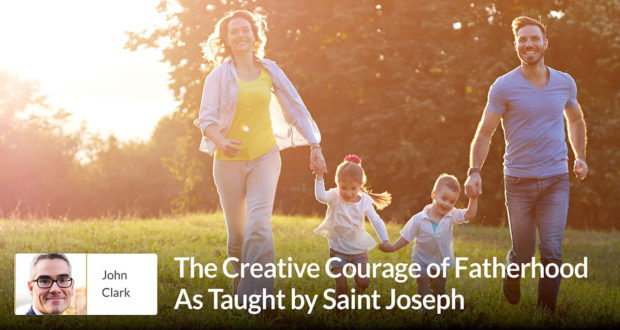 The Creative Courage of Fatherhood As Taught by Saint Joseph

In this Year of St. Joseph, John Clark reminds us that as Saint Joseph’s fatherhood illustrates, when courage and creativity meet, worlds can be conquered.

In his recent Apostolic Letter Patris Corde (With A Father’s Heart), Pope Francis has called the faithful to ponder the wondrous life of Saint Joseph. It’s a beautiful reflection of Saint Joseph’s life, and an echo of the previous pontiffs who had much to write about the foster father of Jesus. In the course of his letter, Pope Francis highlights one quality in particular that grabbed my attention. He calls it “creative courage.”

It is no secret that today’s world is one of infidelity, where sacrificial love commonly cedes to selfish pride and inordinate pleasure. Even for us Catholic men—especially as our chosen callings become increasingly fraught with difficulty—temptations can be both strong and ubiquitous.

There’s not a single devil in Hell who wants to see your marriage succeed, nor is the devil lacking anti-marriage minions on Earth. As someone once put it, the devil’s not after your family; he’s after your marriage. Knockdown the matrimonial domino, and the rest is child’s play.

Give Up or Engage

With this societal backdrop, Pope Francis posits that “in the face of difficulty,” we have two basic options: “we can either give up and walk away, or somehow engage with it.” In a time and place when the world walks away, we are all called to engage—to be true to our engagements.

This requires courage—that much is sure, but it is incomplete. Saint Joseph chose to engage with difficulty, but that was only the beginning of the story. He rose up to protect Jesus and Mary, but when he stood on his feet, he needed all the creativity that God had given him.

Saint Joseph creatively outsmarted and outmaneuvered all of those who sought to harm his family. When his home was under the threat of danger, Joseph found another home. As Pope Francis writes, “Joseph took a stable and, as best he could, turned it into a welcoming home for the Son of God come into the world.”

The pope continues, “Joseph was the man chosen by God to guide the beginnings of the history of redemption. He was the true ‘miracle’ by which God saves the child and his mother.” As Saint Joseph’s fatherhood illustrates, when courage and creativity meet, worlds can be conquered.

Worlds can be saved.

Pope Francis writes that “difficulties bring out resources we did not even think we had.” Of course, that’s true not only for Saint Joseph, but for us. And if you think about it, you discover that Saint Joseph’s mission in life is much like yours and mine. “Rise up, take the child and His Mother.” And certainly implicit in this is to protect, nourish, and love them.

In a myriad of wonderful ways, the Holy Family was very much like yours and mine.

“The Gospel does not tell us how long Mary, Joseph, and the child remained in Egypt. Yet they certainly needed to eat, to find a home and employment. It does not take much imagination to fill in those details. The Holy Family had to face concrete problems like every other family…”

Of course, none of this is to say that your and my duties as husband and father are easy—they can be very hard. But that only serves to highlight another reality; namely, that in some sense, God believes in me. Yes, there are those friends and family members who have illustrated their confidence in me over the years, but none so much as God. Who else has entrusted ten souls to my care?

The proper response I can have to this gift is to love with creative courage.

The Power of Hidden Virtues

We men can mistakenly believe that virtues such as courage and fortitude are confined to the actions of war. We Catholic fathers are said to be members of the “Church Militant,” and that terminology can cause us to desperately hunt for both battles and battlefields.

Saint Joseph found that way. In the struggle to protect our wives and children, Saint Joseph’s life reminds us that the greatest protection is neither sword nor shield.

The greatest protection is love.