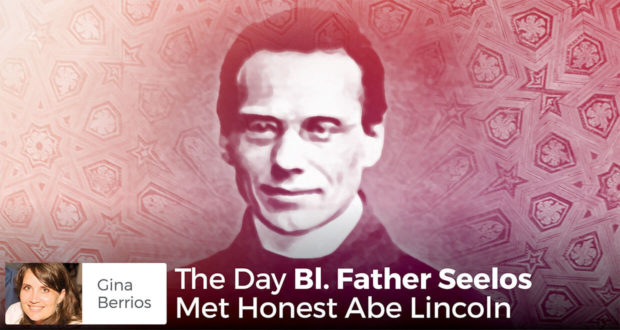 What do homeschoolers have in common with a German-immigrant priest from the 1800s? Gina Berrios presents the inspiring story of Bl. Francis Xavier Seelos.

Abraham Lincoln has signed the Conscription Act for the Union Army, essentially drafting all able-bodied men between the ages of 20-45. Unlike in the Confederacy, clergy and religious are not exempted.

The seminary director for the Redemptorist Order in Annapolis, MD, was a German priest by the name of Francis Xavier Seelos. He was concerned for the young men in priestly formation for his order.

As he wrote to his sister back in Germany,

“If one is chosen in the draft, he has either to go, or to pay $300.00. Because we have so many young members, that would have amounted for us to the gigantic sum of $25,000 or more. I decided then, with the permission of the provincial, to go to Washington with another father and to present personally to the President and other officials our situation.” He also wrote, “If I do not succeed in obtaining a release from that unjust injunction, we will rather go to prison than to take up arms.”

Meeting with the President

Fr. Seelos met in person with President Abraham Lincoln. Of him, he said, “I liked President Lincoln very much when I went to see him. He spoke to us in a sincere, free, and friendly manner.” You can read more about this meeting and how the Redemptorists resolved the issue with the draft at www.seelos.org. (Spoiler: they did not pay the fine, nor did they desert to Canada.)

I first learned about Blessed Francis Xavier Seelos at the start of our homeschooling journey. We live on the Gulf Coast, and there is a great devotion to Bl. Seelos radiating out of St. Mary of the Assumption Church in New Orleans, where his shrine and tomb are located.

My parish offered a pilgrimage to the shrine the summer before we started homeschooling. We took the whole family.

At the shrine, we went to Mass and toured the Bl. Seelos museum. We prayed at his tomb and stood in awe at the collection of his relics. We even got our own first-class Bl. Seelos relic.

At the museum, we learned about Bl. Seelos’ encounter with Abraham Lincoln and additional details of his fascinating, inspiring life. Francis Xavier Seelos was born on January 11, 1819, in Bavaria, Germany, to a large, devout Catholic family. In 1842, he joined his diocesan seminary.

A year later, he sailed to New York to serve the German-speaking immigrants as a member of the Congregation of the Most Holy Redeemer. A year after that, on December 22, 1844, he was ordained a priest in the Redemptorist Church of St. James in Baltimore, Maryland.

Bl. Seelos was a remarkable priest and was considered an expert confessor and spiritual director. He served for nine years at St. Philomena, in Pittsburgh, first as the associate pastor to St. John Neumann (have you ever noticed how saints seem to cross paths with each other?). He witnessed firsthand the holiness of St. John Neumann, as they shared a room in the rectory. He considered him a father figure as well as a spiritual mentor.

From 1854 to 1863, Bl. Seelos served in Maryland in Baltimore, Cumberland, and Annapolis. In 1860, he was proposed as a candidate for Bishop of Pittsburgh, but he asked to be excused. From 1863 until 1866, during a war-torn time, he preached as a missionary in the states of Connecticut, Illinois, Michigan, Missouri, New Jersey, New York, Ohio, Pennsylvania, Rhode Island, and Wisconsin. Then he was sent to the South.

In 1866, he was made pastor of St. Mary of the Assumption in New Orleans. He served only one year, tirelessly, during the Yellow Fever outbreak. Ultimately, he contracted the disease and died from it. In his final weeks, ravaged with the disease himself, he would lie on the bench outside of the church, in full vestments, too ill to sit, so that he could anoint dying people that were brought to him. He died on October 4, 1867, at the age of 48.

In his twenty-four years of service in America, Bl. Seelos left quite a mark. He radiated holiness; the people in New Orleans actually said he had a glow surrounding him. Bl. Seelos was joyful in exercising his priestly ministry. He was known as a kind and friendly pastor, whose confessional was always full.

Many healings are attributed to him, both when he was alive and after his death. Deeply devoted to Our Lady, he would bless the sick before an altar to Mary in the church. All healings he attributed to the Blessed Virgin. He dedicated his priestly life to Our Lady and encouraged his parishioners to pray the Rosary and ask for her help.

On April 9, in the Jubilee Year 2000, Pope St. John Paul II put this little known missionary priest from Bavaria on the world stage, by making Bl. Seelos the only North American to be beatified that year.

As I learned all these details and more about the life and ministry of Bl. Seelos, I was most struck by his overriding concern for the catechesis and formation of children. He considered one of the main responsibilities and joys of his priesthood to be passing on the Faith to children. He believed the catechesis of children is the foundation of holiness for a parish.

Bl. Seelos lived during a turbulent time in our country, serving in the North and the South. Despite all that was going on around him, he radiated joy, lived a life of holiness, served tirelessly as a priest, and cared most about passing the Faith on to children. He lived ordinary, everyday holiness, in an exceptional way.

After spending a day at his shrine, I knew I had found a friend, an intercessor, a patron for this homeschooling adventure that my family was about to embark on. His feast day is celebrated on October 5. I start each homeschooling year by offering a novena to Bl. Seelos, asking for his help as I teach my children and pass on the Faith.

I encourage you to learn more about Bl. Seelos and ask for his help as you continue in your homeschool journey. May we see him as a source of inspiration to fully embrace our vocation and call to holiness, and to live a life of joy as we pass on the Faith to our children.

O My God, I truly believe You are present with me. I adore Your limitless perfections. I thank You for the graces and gifts You gave to Blessed Francis Xavier Seelos. If it is Your holy will, please let him be declared a saint of the Church so that others may know and imitate his holy life. Through his prayers please give me this favor… (HERE MENTION YOUR SPECIAL INTENTIONS).